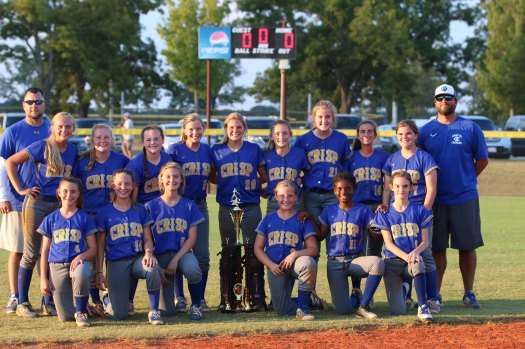 Thursday turned out to be a very productive day for Crisp County’s softball programs.

The middle school team capped off an unbeaten season with a win in the Deep South Conference championship by defeating Lee West 5-3 at the Crisp County Recreation Department Ball Complex on the day. Meanwhile, the high school Lady Cougars completed a road doubleheader sweep of region opponent Monroe High in Albany by a score of 15-0 in both games to wrap up their second consecutive region 1-AAA title.

The Crisp County Middle School Lady Cougars put their first two runs of the championship game on the board during the bottom of the second inning. Camilla Bloodworth reached base with two outs after being hit by a pitch and later scored on a wild pitch. Lily Duncan hit an RBI single to centerfield later on in the frame to score Blakely Young, putting CCMS up 2-0 entering the third inning.

Reagan Bozeman pitched a scoreless top of the third inning and the Lady Cougars subsequently tacked on two more runs in the bottom half of the frame. Addie Hobbs and Cate Raines each drew a walk and later came around to score during the third inning. Peyton Patrick had an RBI groundout during the frame, while Bozeman and Bloodworth each reached base on walks.

Lee West scored their first run of the contest during the top of the fourth frame with a pair of triples, but Crisp limited the damage to just one run to maintain a 4-1 lead entering the bottom half.

CCMS extended the lead to 5-1 with a run in the fourth inning. LaKayla Alexander reached base on a Lee West error with one out, and she subsequently scored on an RBI groundout by Hobbs.

The visitors loaded up the bases with one out during the top half of the fifth, and a two-run single later in the frame made the score 5-3. The Lady Cougars got out of the jam shortly after with defensive plays by infielders Alexander and Bloodworth.

After holding the Lady Cougars scoreless during the bottom of the fifth, Lee West got a leadoff single in the top of the sixth hoping to continue their comeback, but Bozeman finished the visitors off by striking out the side over the remainder of the inning to close the game out for the 5-3 CCMS win.

The middle school Lady Cougars finished the season with an overall record of 12-0-1 (W-L-T).

“I’m so proud of this team for not only going undefeated and winning the conference championship, but also for all the hard work and the improvements that each player made over the course of the season,” CCMS Head Coach David Lamberth said about the accomplishments of the team this season.

“We are definitely looking for big things out of the group of eighth graders moving up to the high school level. They have been to the conference finals three years in a row, and they finally won it,” he added.

The high school Lady Cougars easily got past Monroe in their doubleheader on Thursday, with both wins finishing with a  15-0 score line.

Olivia Bridges got the win in game one by pitching three innings and allowing just two hits while striking out six batters.

Riley Blampied and Ainslee Forsythe both finished the first contest with three hits in three at bats, while Jo Brady and Abby Shiver each had two base knocks. Sara Ruth Raines, Macy West, and Peyton Bozeman all added one hit, while Kirin Webb and Olivia Taylor both walked three times each.

Peyton Adkins pitched three innings for the Lady Cougars to get the win in game two. She allowed just one Monroe hit while recording four strikeouts.

The sweep brought the Lady Cougars’ final region record for the season to 8-1, and they now have an overall record of 15-5. The 8-1 region mark sealed Crisp County’s second consecutive 1-AAA title, as the Lady Cougars edged Cook County (7-2 region record) for first place after taking two games out of three versus the Lady Hornets earlier this season.

CCHS will close out the regular season schedule with a pair of games next week as they begin to turn their attention toward the class AAA playoffs. Monday the Lady Cougars will host Schley County with first pitch set for 5 p.m. Then on Thursday CCHS will play their final road game of the regular season at Bainbridge High School at 5.