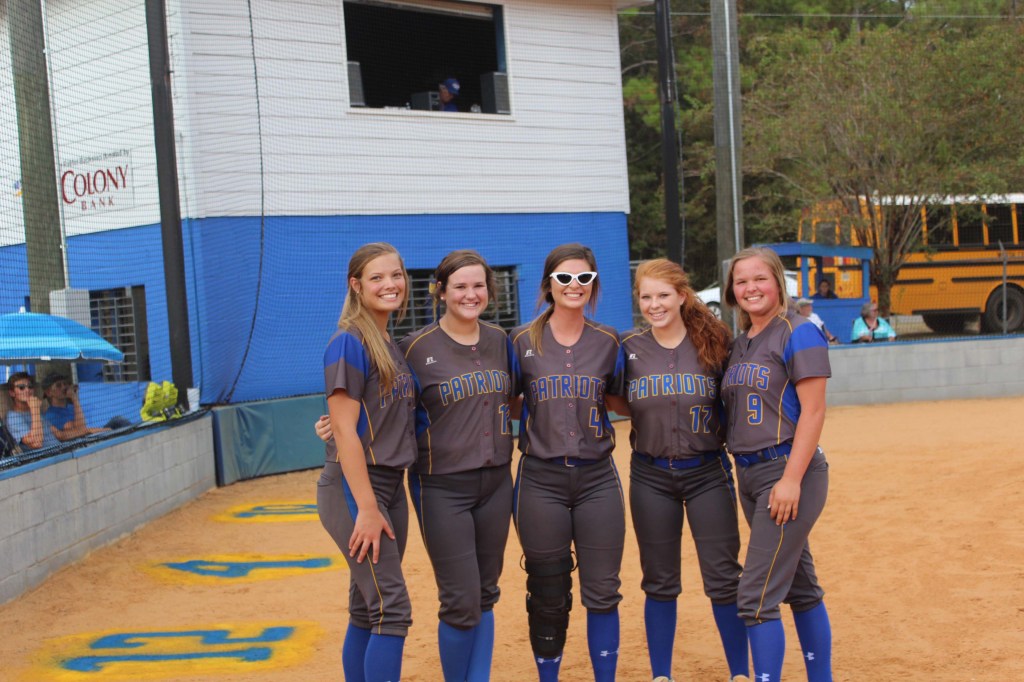 The Wilcox County High School softball team finished up their regular season schedule with a pair of wins this week.

The Lady Patriots defeated Worth County by a score of 8-3 on Tuesday evening in their senior night game, and then capped off their schedule with a 10-1 road victory over region opponent Clinch County on Thursday afternoon in Homerville.

Prior to the beginning of Tuesday night’s game against Worth, Wilcox recognized their five senior players Lexie Anderson, Grace Keene, Jalynn Keene, Maci Martin, and Chastity Stephens, for all of the effort they put into the WCHS softball program during their high school athletic careers. Following the ceremony, the Lady Patriots went to work on winning their final home game of the regular season.

The two teams played a scoreless first inning, but Wilcox grabbed the lead shortly after with five runs during the bottom of the second frame.

Wilcox County’s Destiny Tisdol came up to bat in the inning with two outs and two runners on base, and she subsequently put the ball in play, which led to a Worth error that allowed Anderson to score for the first run of the contest. Grace Keene singled in the next at bat to load up the bases, and Carlee Walls followed with a hit of her own to drive in the second Patriot run. Stephens then kept the line moving with a two-run double that scored Tisdol and Sara Nutt, and Bailee Barnard later drew a bases loaded walk to stretch the Wilcox lead to 5-0 entering the third inning.

After scoreless third and fourth frames, the Lady Patriots tacked on their sixth run of the contest in the fifth inning when Jalynn Keene scored on another Worth County error following an infield hit by Tisdol. Wilcox led 6-0 after five innings of play.

The Worth Lady Rams cut the lead in half shortly after with three runs in the top of the sixth inning on four hits.

The three-run top of the sixth cut the Wilcox lead to 6-3, but Worth got no closer than that, as the Lady Patriots added two runs to their total in the bottom of the sixth before closing the game out for the 8-3 win.

Martin had an RBI single for Wilcox during the bottom of the sixth, while Walls, Stephens, and Madison Terry each tacked on one hit during the frame.

Grace Keene and Jalynn Keene split time in the pitcher’s circle for the Lady Patriots in the contest. Grace Keene worked four shutout innings, allowing one hit and walking one while collecting three strikeouts. Jalynn Keene pitched three frames and allowed the three Worth runs on six hits.

Wilcox outscored Clinch County (12-12 overall record) 3-1 during the first inning of Thursday’s game, before pulling away with seven more runs over the next three frames for the 10-1 victory after just five complete innings.

Walls provided the runs during the top of the first frame with a three-run home run after Tisdol and Grace Keene had each reached base with a hit to start the game.

Tisdol hit an RBI single during the second frame that scored Anderson, and Blakelyn Bloodworth scored a run for Wilcox during the top of the third after a hit by Stephens.

The Lady Patriots piled on their final five runs of the day during the top of the fourth frame. Stephens provided a two-run double during the inning, while a pair of errors by the hosts helped Wilcox push across the final three runs for the 10-1 score line.

In total, Wilcox collected 12 hits during the contest, compared to just three for Clinch.

Walls finished the day with three hits (including the first-inning home run) to lead the Lady Patriot batting order. Tisdol, Grace Keene, and Stephens all finished with two this apiece, while White, Anderson, and Jalynn Keene each had one base knock.

Stephens got the start in the pitcher’s circle for Wilcox and picked up the win by pitching all five innings and allowing one unearned run while striking out six batters.

With the two wins to close out their regular season schedule, the Lady Patriots brought their overall record to 18-6, with a 13-3 mark in region 2-A competition. Their final league record saw them finish as runners-up in the region out of nine teams.

The Lady Patriots have assured themselves of a spot in the playoffs heading into next week’s first round of state, scheduled for Wednesday and Thursday.

The class A playoff power ratings are still to be finalized with schedules winding down around the state, but the Lady Patriots held the number 11 spot in Friday evening’s updated rankings. The top eight ranked teams move straight into the second round of state, while teams ranked from nine to 16 host a first round series next week against teams ranked between 17 to 24.

Update: Wilcox will host Portal High School (ranked number 22, 13-9 overall record) in the first round of state, with games one and two of the best-of-three series scheduled for Wednesday at 4 p.m. and 6 p.m. in Rochelle. Game three will be played on Thursday at 5 if necessary.