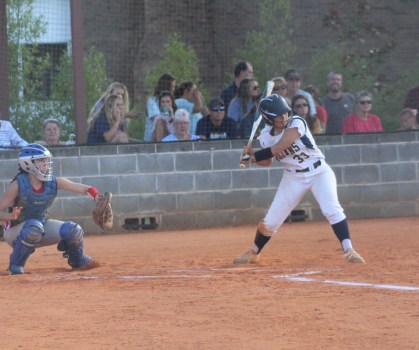 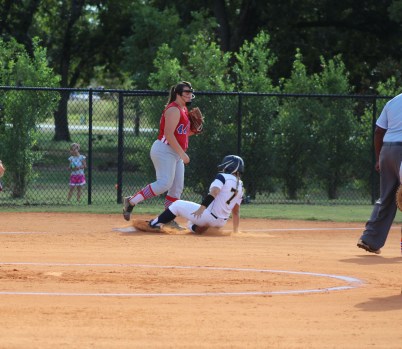 ____________________Fullington Academy's Maggie Rogers (7) slides into third base for a triple during Fullington's playoff series win over Covenant Academy on Tuesday afternoon in Pinehurst. 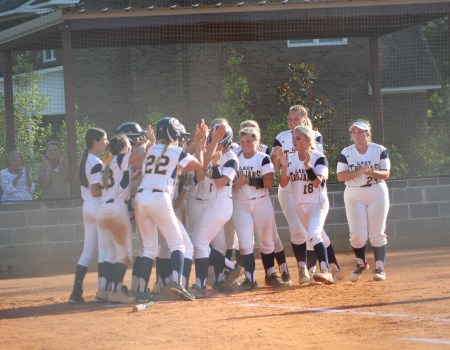 ____________________Fullington's Parker Wall (1) is met by all of her Lady Trojan teammates at home plate following her first of two home runs during game two of Tuesday's playoff series in Pinehurst. 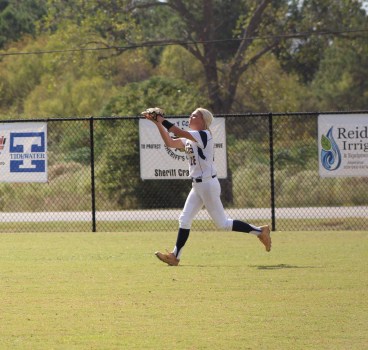 ____________________Fullington outfielder Carlee Roberts secures an out in centerfield during game one of Tuesday's playoff softball action.

PINEHURST— For the third year in a row, the Fullington Academy Lady Trojan softball team will finish their season by playing for the GICAA/GAPPS fall softball state championship after defeating Covenant Academy by scores of 12-0 and 9-1 in the state semifinal series in Pinehurst on Tuesday afternoon.

Fullington needed just four innings to win game one by a score of 12-0 on Tuesday.

Pitcher Ella McGalliard threw a four-inning perfect game with five strikeouts, and also hit a two-run home run during the bottom of the second inning to lead the Lady Trojans in game one.

Fullington opened the scoring in game one with a two-out RBI single by Lauren Rucker in the first inning that scored Marley Jones and Carlee Roberts. McGalliard’s home run later put the Lady Trojans up 4-0 entering the third inning.

The bottom of the third frame saw Fullington pile on six more runs for a 10-0 lead entering the fourth. Maggie Rogers hit a two-run triple during the third that allowed Lauren Blake and Maddy McLeod to reach home plate. Roberts and Carmen Phillips both added RBI hits later on in the third inning.

A pair of errors from the visitors allowed Fullington to tack on the final two runs of the first game during the fourth inning for the 12-0 final score line.

Fullington took game two of the playoff series doubleheader by a final score of 9-1 after just five innings of play. Parker Wall led the way for the Lady Trojans in the second contest with a pair of home runs.

Rogers got the start in the pitcher’s circle for Fullington and worked all five innings, allowing just one unearned run on five hits while striking out three to get the victory.

The Lady Trojans opened the scoring in the first inning after Phillips led off the game with a double before stealing third base and later scoring on a passed ball for a 1-0 lead after the top of the first.

Roberts, McLeod, and Claire Thompson subsequently each had RBI hits during a five-run top half of the fifth frame for a 9-0 Lady Trojan lead. The Lady Rams of Covenant scored their only run of the day during the bottom of the fifth but it was not enough to extend the contest any longer.

The two playoff wins on Tuesday ran Fullington’s overall record to 18-5 on the season.

The Lady Trojans will be hosting the state championship series versus David Emanuel Academy on Saturday in Pinehurst starting at 11 a.m.