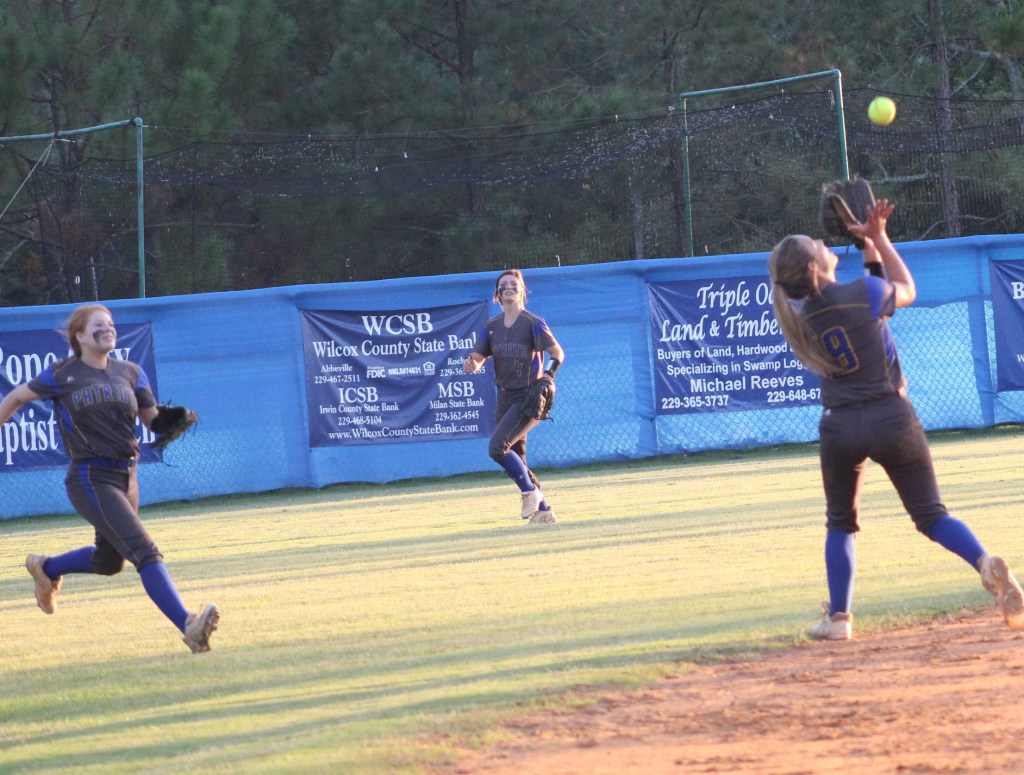 ROCHELLE— The Wilcox County High School softball team moved into the second round of the GHSA class A state playoffs by defeating the Portal High Lady Panthers in a two-game sweep by scores of 3-0 and 9-5 on Wednesday night in Rochelle in first round tournament action.

Wilcox senior Chastity Stephens pitched a seven-inning complete game shutout and also had two hits offensively to lead the Lady Patriots to the 3-0 win in game one of Wednesday’s doubleheader. She allowed just five hits and struck out 12 during her seven innings of work in the pitcher’s circle.

Wilcox took a 2-0 lead in the bottom of the first inning of the contest when Bailee Barnard hit a two-run single that scored Sara Nutt and Blakelyn Bloodworth.

The Lady Patriots scored the only other run of game one during the bottom of the fifth frame when Stephens hit an RBI double to drive in Nutt.

Carlee Walls finished the game with three hits (all singles) to lead the Lady Patriot batting lineup in the contest. Stephens and Destiny Tisdol each finished with two hits, while Barnard, Lexie Anderson, and Jalynn Keene all had one base knock apiece.

The second contest of the series saw the Lady Patriots score four runs in the top half of the eighth inning to win 9-5 after the teams had entered the extra frame tied at 5-5.

The two teams swapped the lead over the first several innings until Portal scored a run in the bottom half of the fifth frame to tie the score at five apiece.

Scoreless sixth and seventh frames then forced the game to be decided in an extra frame.

The Lady Patriots went on to get RBI hits from Grace Keene, Walls, and Stephens in the top of the eighth inning to take the 9-5 advantage. Stephens subsequently finished off the contest for the win by pitching a three up, three down bottom of the eighth that included a pair of strikeouts.

Bloodworth got the start in the circle for the Lady Patriots and worked three innings, in which she allowed four runs (three earned) on seven hits and one walk. Stephens pitched the final five innings for Wilcox and conceded just one run on three hits while striking out eight batters.

Walls again played a key role for the Lady Patriot run scoring output, as she collected four hits, including a home run and a double, in five at bats while also driving in three runs.

Wilcox will be on the road next week in the second round of the state tournament, as they will travel to take on the Commerce High School Lady Tigers (19-7). Games one and two are scheduled for Wednesday as a doubleheader, with the first contest beginning at 4 p.m. Game three will be played on Thursday starting at 4 if necessary.