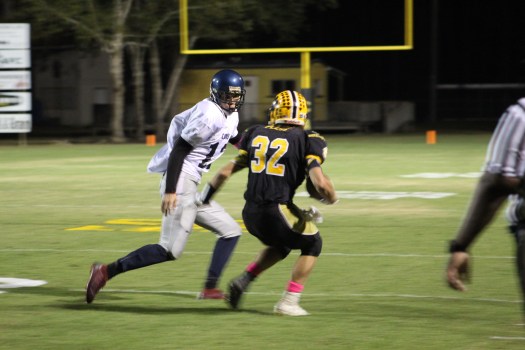 _______CA’s Baylor Pless (32) looks to make a move against a Solid Rock defender while carrying the ball during Friday night’s Wildcat win. 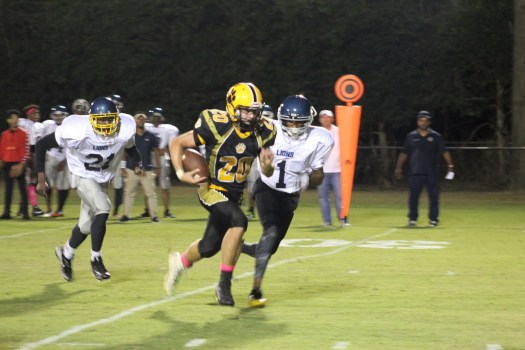 CORDELE— The Crisp Academy Wildcat football team recorded their fourth victory of the season on Friday night by defeating the Solid Rock Academy Lions by a final score of 44-14 in Cordele.

The Wildcat defense forced a quick turnover on downs to start the game, and the CA offense subsequently put the first points of the contest on the board on their first possession.

Just three plays into the drive, CA quarterback Noah Mercer threw a pass to Baylor Pless, who outran the Solid Rock defense for what ended up being a 58-yard touchdown reception. The ensuing two-point conversion attempt was unsuccessful, but the Wildcats led 6-0 just over five minutes into the contest following the touchdown.

The CA defense came up with another quick stop shortly after, and the offense went right back to work on the next possession looking for their second touchdown of the contest.

Garrett Gravitt and Billy Hardin began the possession with positive rushing plays for the Wildcats, and Hardin later capped off the drive with a 36-yard touchdown reception on a pass from Mercer. Gravitt then tacked on the two-point conversion to put CA up 14-0 with just over a minute to play in the first period.

The two teams traded defensive stops for the majority of the remaining time during the first half until the Wildcats got a 12-yard touchdown pass from Mercer to Pless with less than a minute to go in the second quarter. Zach Atherton added a two-point conversion reception to put CA up 22-0 heading into the halftime break.

Crisp added to the lead just three plays into the third quarter when Mercer threw a deep pass to Pless, who hauled in the catch and beat his defender to the end zone for a 60-yard touchdown. Mercer threw a pass to Gravitt for the ensuing points after, and the Wildcats led 30-0 just over a minute into the second half.

Solid Rock scored their first points of the night on an 11-yard touchdown pass near the halfway mark of third quarter to cut CA’s advantage to 30-6.

Pless scored a short rushing touchdown on the next Wildcat possession to restore the lead out to 36-6 with less than a minute to play in the third quarter.

Jackson Napier scored a rushing touchdown in the fourth quarter for the Wildcats, and Mercer ran in the two-point attempt shortly after to bring the Wildcat lead out to 44-6.

Solid Rock subsequently got a late touchdown pass followed by a two-point conversion to bring the final score line out to 44-14 in favor of CA.

Andrew Willis finished the night with five total tackles and an interception for the Wildcat defense, while Hardin, Gravitt, and Napier all racked up a handful of stops as well. Jacob Odom, Ed Jordan, Pless, Lane Freeman, Eli Griffin and Atherton all added some tackles for the Wildcats on the night.

The win puts the Wildcats at 4-2 so far on the season.

Up next on the schedule for CA is a road game at Holy Spirit Prep (2-4) next Friday night.