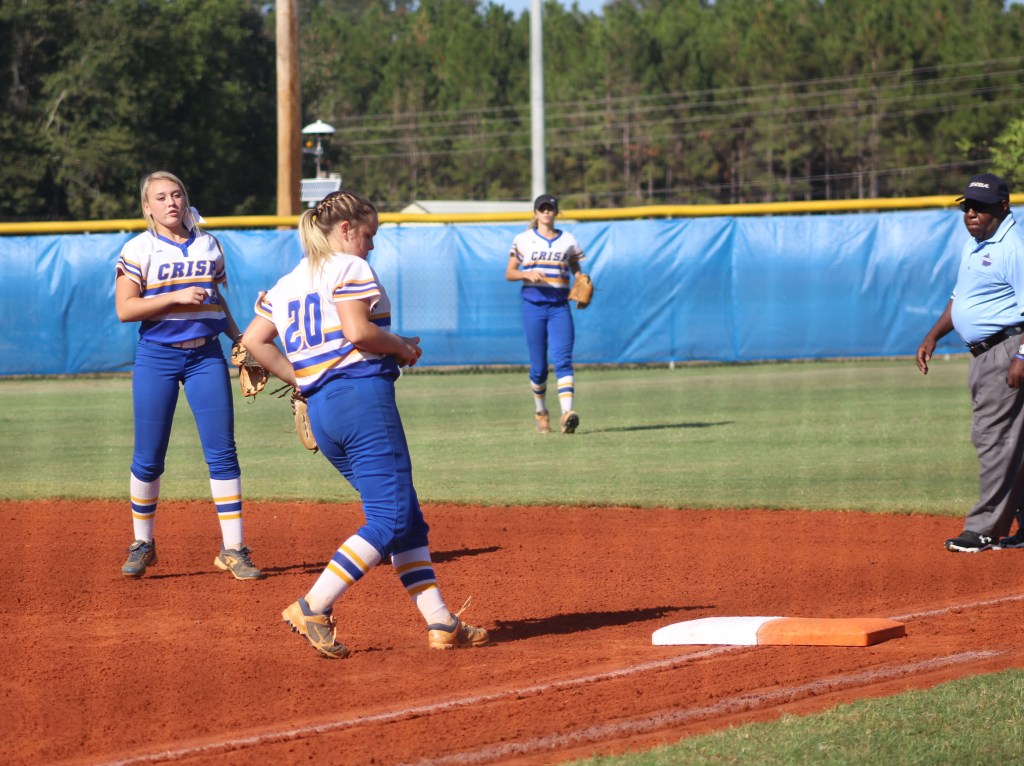 Crisp County High School’s Olivia Taylor (20) makes her way over to first base for an out after fielding a ground ball during game one of the Lady Cougar playoff series win over Windsor Forest as teammates and an umpire look on.

CORDELE— Crisp County High School’s softball team swept the Windsor Forest Lady Knights in a best-of-three series on Wednesday evening in Cordele to advance to round two of the GHSA class AAA state playoffs. The Lady Cougars easily defeated the visitors in both contests of the series by final scores of 16-0 (game one) and 18-0 (game two).

Crisp scored all 16 of their runs from game one during the bottom of the first frame. The Lady Cougars posted those 16 runs by way of five walks, five batters hit by pitch, and base hits from Peyton Bozeman, Ainslee Forsythe, Kirin Webb, Sara Ruth Raines, Macy West, and Peyton Adkins. Every starter in the CCHS batting lineup scored at least one run in game one.

CCHS freshman pitcher Olivia Bridges got the victory in game one, as she threw three perfect innings with seven strikeouts in the run-rule shortened playoff win.

Adkins pitched a three-inning complete game shutout for the Lady Cougars in game two to get the win.

CCHS again used several free base runners to score their total of 18 runs in the second contest to easily complete the sweep against the visitors.

Crisp will be hosting Lumpkin County (18-12) in the second round of the state playoffs next week.

Games one and two of the series will be played as a doubleheader on Wednesday afternoon starting at 4 p.m., with game three to be played on Thursday at 5 if necessary.

The Lumpkin County Indians defeated the Westminster Wildcats (11-15) two games to one in their first round series in the AAA state playoffs.