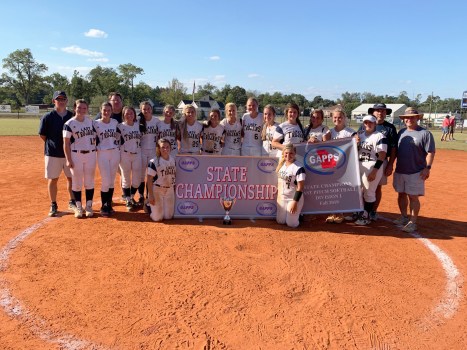 ____________________The Fullington Academy Lady Trojan softball team and coaches are pictured with their trophy after winning their third consecutive state championship on Saturday afternoon in Pinehurst. The team defeated David Emanuel Academy in the state title series by scores of 14-3 and 19-2. 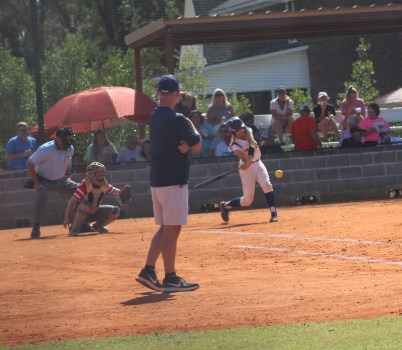 ____________________Fullington's Lauren Rucker swings the bat looking for a hit during Saturday's championship series in Pinehurst. 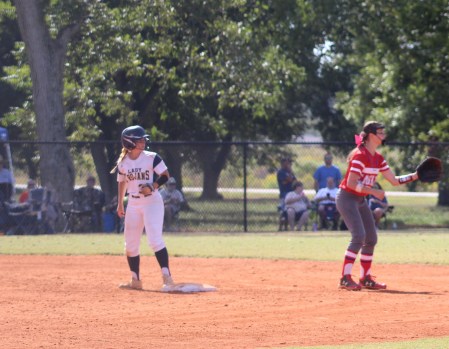 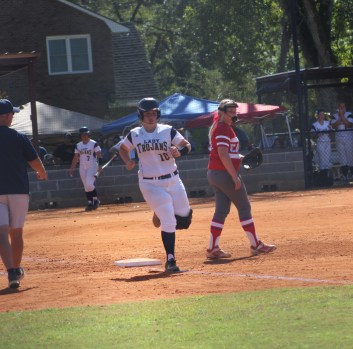 PINEHURST— The Fullington Academy Lady Trojan softball team capped off their 2019 season by winning a state title for the third year in a row when they swept the David Emanuel Academy Lady Eagles in Saturday’s GAPPS championship series in Pinehurst. Fullington won game one of the series by a final score of 14-3, and then took the second contest by a final of 19-2.

The visitors took a 3-0 lead over Fullington during the top of the first inning by way of two singles, a hit batter, and an error, but the early DEA advantage did not last long, as the Lady Trojans went on to score 14 times to run away with the game-one victory after just five innings of play.

Fullington scored five runs during the bottom half of the first inning to take a 5-3 lead into the second inning. Carmen Phillips led off the frame with a base hit for the Lady Trojans and Ella McGalliard followed up with her first of three home runs on the day to plate the first two Fullington runs of the game. The Lady Trojans plated their third run of the first inning after an error from the visitors allowed Carlee Roberts to score. Lillie Grace Register drove in Fullington’s final two runs of the inning with an RBI single that plated Lauren Blake and Maddy McLeod.

After a scoreless second inning, the Lady Trojans used an eight-run bottom half of the third frame to take complete control of the opening game of the series. Parker Wall led off the inning with a solo home run to center field to get the scoring started. Phillips and McGalliard added RBI hits shortly after, and another DEA error saw Fullington stretch the lead out to 10-3. Roberts capped off the scoring for the Lady Trojans in the frame with a three-run home run to deep centerfield for a 13-3 lead.

Marley Jones later scored Fullington’s final run of game one after a sacrifice fly by Lauren Rucker during the bottom of the fourth inning.

McGalliard pitched all five innings for the Lady Trojans in the first contest, and allowed just one earned run on two hits and one walk while striking out four batters.

Fullington took control of the second game of the series with five runs in the top half of the first. McGalliard hit a solo homer in the frame to get the scoring started. Rucker and Wall each added an RBI double later on in the frame to increase the lead out to 5-0.

The Lady Trojans subsequently tacked on three more runs to their advantage in the top half of the second, followed by two more in the third inning. An eight-run top half of the fourth later stretched the Trojan lead out to 18-0, and McGalliard finished the Fullington scoring in game two with a solo home run in the top of the fifth for a 19-0 advantage.

DEA subsequently scored a pair of runs during the bottom of the sixth for the final score line of 19-2.

McGalliard pitched all seven innings in game two for the Lady Trojans to get the win. She allowed seven hits and two earned runs while accumulating six strikeouts in the contest. She also led the Fullington batting order in the contest with four hits (two home runs/two doubles), five RBIs and three runs scored.

On the path to their third consecutive GICAA/GAPPS state softball title, the Lady Trojans accumulated an overall record of 20-5 for the season out of a highly competitive schedule that included games against several GISA and GHSA playoff teams.