Lady Cougars fall to Lumpkin Co. in second round of state 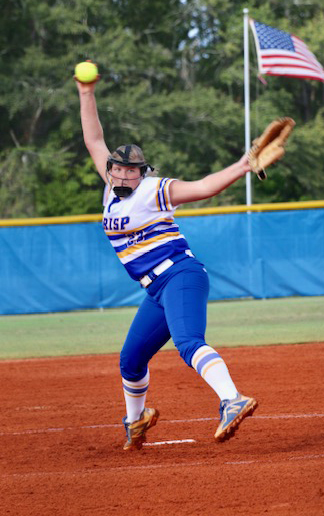 Crisp County freshman pitcher Olivia Bridges (23) deals to the plate during game one of the Lady Cougars’ final series of the 2019 campaign, a second-round playoff set that saw the 1-AAA region champs falling in two close games with Lumpkin County.

CORDELE – The Crisp County High School Lady Cougar softball team had their 2019 season come to an end on Wednesday night in the second round of the GHSA class AAA state playoffs, as they fell to the Lumpkin County Lady Indians (20-12 record) in a best-of-three series in Cordele. The visitors won the first game by a final score of 5-3, and then took the second contest by a final of 4-2.

After a scoreless first inning, Lumpkin County took a 2-0 lead in the top half of the second frame by way of three hits, a walk, and one Crisp County error.

The visitors then went on to add a run to their lead during the top half of the third frame after four base hits. Crisp catcher Jo Brady helped limit the damage in the frame when she picked off a Lumpkin runner at third base for the final out of the top of the third inning, and the Lady Cougars subsequently picked up their first runs of the day in the bottom half of the inning.

Peyton Adkins led off the bottom of the third with a base hit before taking second on an error. Kirin Webb came up with a one-out hit later on in the frame that allowed Adkins to reach home plate, and an error on the play saw Webb advance to third. Ainslee Forsythe followed with an RBI groundout to get Crisp back within a run of the lead at 3-2. Brady hit a two-out double off the fence in left field shortly after, but the visitors escaped the frame with the lead.

Crisp pitcher Olivia Bridges subsequently fired a three up, three down top half of the fourth inning that included a diving catch in right field by Adkins, and the Lady Cougars went on to tie the score in the bottom half of the frame. Peyton Bozeman got the rally started for Crisp with a two-out single to centerfield. Adkins and Sydney Young each drew a walk shortly after to load up the bases, and Webb used an infield hit to drive in Bozeman to knot the score up at 3-3.

Crisp loaded up the bases once more in the bottom half of the fifth inning looking to take the lead, but Lumpkin got out of the jam with the game still tied, and the visitors then scored two runs in the top half of the sixth on three hits and a walk to grab a 5-3 lead.

The Lady Cougars had four batters reach base over the course of the sixth and seventh frames, but Lumpkin held off the comeback attempt for the 5-3 win.

Webb led the CCHS batting lineup in the contest with three hits, two RBIs, and one run.

The visitors opened the scoring in the second contest with a two-run home run in the bottom of the first inning for an early 2-0 advantage.

CCHS later got on the board during the top of the third frame with a run on three hits. Forsythe reached base with a two-out single, and Brady followed with a double to give the Lady Cougars runners at second and third. Raines picked up an infield single shortly after that plated Forsythe to get Crisp back within a run of the lead at 2-1 entering the bottom of the third.

Lumpkin scored once in the bottom half of the third on two hits and a walk, but West helped Crisp limit the damage by throwing out a base runner at the plate from her spot in centerfield to end the inning with the visitors ahead 3-1.

After a scoreless fourth inning, Crisp cut the deficit to one by scoring once in the top half of the fifth. Forsythe drew a leadoff walk to start the frame, and consecutive hits by Brady and Raines saw the Lady Cougars load up the bases. Taylor later drew a one-out bases loaded walk to drive in Forsythe to make the score 3-2 in favor of Lumpkin County.

Lumpkin tacked on the final run of the game during the bottom of the fifth for the 4-2 lead, and the visitors held on from there to win the playoff series.

Bridges pitched six innings in game two for the Lady Cougars and allowed four runs while recording one strikeout.

The Lady Cougars finished the 2019 season with an overall record of 17-9 and a second consecutive GHSA region 1-AAA softball title to their credit.