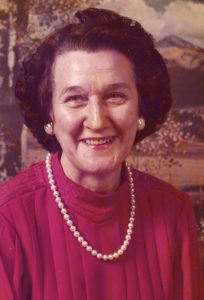 Funeral services will be held 3 PM, Friday, October 25, 2019, at First Baptist Church of Rochelle, with the Rev. Richard Compton officiating. Interment will follow in Morningside Cemetery in Rochelle. The family will receive friends one hour prior to the service in the sanctuary on Friday.

Mrs. Kelley was born August 5, 1926, in Rochelle, Georgia, to the late Thomas Z. & Hattie Crummey Fenn. She was a graduate of Georgia State College for Women in Milledgeville. She served as Postmaster in Rochelle for 31 ½ years, retiring June 3, 1986. She was very active in the Georgia Postmaster organization serving 13 years as a state officer, including President, Executive Vice-President, Secretary and Treasurer. She also served as editor of the Georgia Postmaster magazine. While serving at Rochelle, she was a trainer postmaster, having trained new postmasters all across Georgia. She also served on the Postmaster Selection Board. She attended 28 National Postmaster conventions while actively working and six additional conventions after retiring. Mrs. Kelley was honored to be named Georgia Outstanding Postmaster of the year on four occasions. She enjoyed traveling and visited Hawaii three times along with 45 of our 50 states. She and a cousin traveled to Havana, Cuba in 1949. She was a faithful and active member of First Baptist Church of Rochelle, serving as church clerk for 47 years and chairing Homecoming since 1988. She was stewardship chairman until March of this year and a former young adult Sunday school teacher.

Mrs. Kelley was very active in civic organizations as well. She was a charter member of the Dogwood Garden Club, the Alberta Crummey Garden Club, the Wilcox Rifles Chapter United Daughters of the Confederacy, the Daughters of the American Revolution, and a life member of the Garden Club of Georgia. She was well known for her immaculate yards and took great pride in the many varieties of iris and tulips she cultivated. Mrs. Kelley was treasurer of the Bicentennial Cookbook Committee and a charter member of the Friends of Morningside Cemetery, helping to ensure a beautiful resting place for many friends and family. She was chosen Wilcox County Woman of the Year in 1978.

She is survived by a niece, LaQuita & Stewart Carswell, Jr. of Fitzgerald; great-niece, Benita Carswell & Janie Gray of Atlanta; great-nephew, Stewart Carswell, III & his wife Cindy of Fitzgerald; great-great-nephews: Nathan Carswell and Logan Carswell; and a great-great-niece, Abby Carswell. In addition to her parents, she was preceded in death by her husband, Daniel B. Kelley; a sister, Jewell Fenn Renfroe; and two brothers: Samuel Russell Fenn and James Solomon “Buddie” Fenn.

To sign the online registry, go to www.paulkfuneralhome.com.
Paulk Funeral Home, Fitzgerald, is in charge of arrangements.