Standing up for the right thing: State auditor, witness press for insurance payout and win 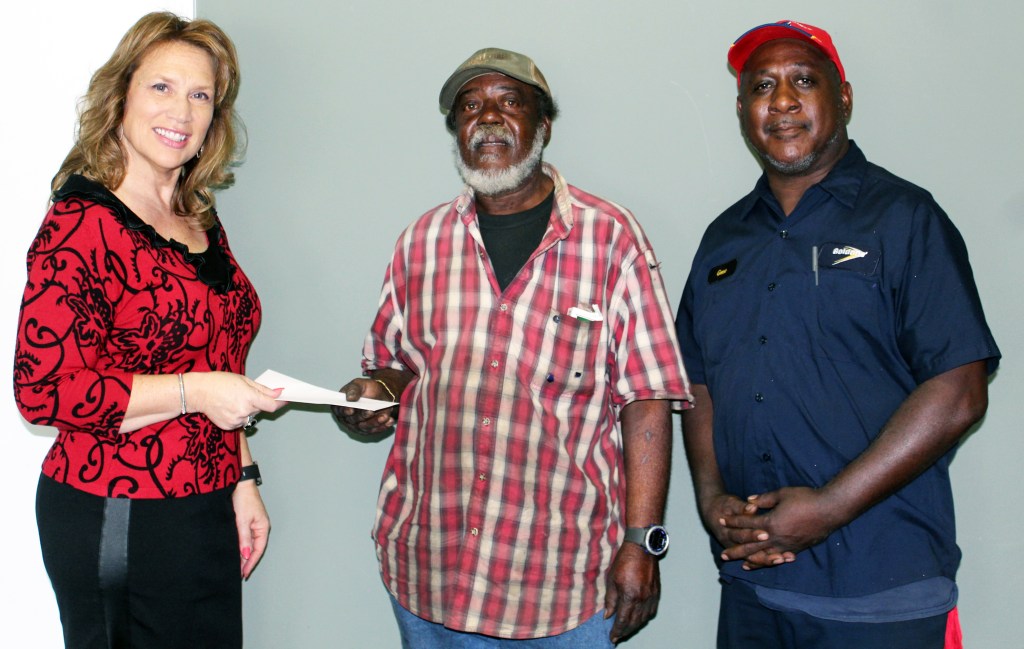 Deb Mohler (left), an auditor in Georgia Insurance Commissioner John King’s industrial loan division, hands a claims check to Rufus Holt as he stands next to Eugene Bell, both of Cordele. Bell provided testimony that was critical in convincing an insurance company to honor a life insurance policy on Rufus’ brother Bobby, who was killed at his home on March 18.

In today’s world, the “little guy” needs all the help he can get.

Luckily, there are people like Deb Mohler. She’s an auditor in Georgia Insurance Commissioner John King’s industrial loan division, and she’s not afraid to stand up to the “big guys.”

“I work for a commissioner who is committed to fighting for our consumers,” Mohler said, “and I’m proud to do it.”

In the course of Mohler’s routine work auditing a local loan company, she noticed that a life insurance claim stemming from the March 18 murder of Cordele resident Bobby Holt was denied.

“The loan company here in Cordele had done absolutely nothing wrong,” Mohler explained. “In fact, they were as surprised as I was that the claim was denied.”

But the insurance vendor balked in this case, reportedly saying that because Holt was a homicide victim that it was not obligated to pay. Mohler poured over the fine print in Holt’s policy, and she wasn’t able to find anything that backed up the insurance company’s decision.

Holt’s brother Rufus, the named beneficiary in the life insurance policy, said he assumed that once the insurance company issued its initial denial that the matter was final.

“I had given up on it,” Rufus said, “until Ms. Mohler contacted me.”

Mohler had taken it upon herself to see that the insurance company – which neither Mohler nor Holt would name, saying the company technically did nothing wrong – lived up to its end of Holt’s insurance policy. She contacted the insurance company directly, noting that Bobby Holt never missed a monthly payment and was simply an innocent victim who was killed while he was minding his own business at his home in a Cordele Housing Authority apartment block.

So Mohler went to work researching Holt’s death. She sorted through every publicly available document related to the March 18 murder and discovered there was a single witness in the case.

“I knew if I could track down this witness and get a sworn statement that would go a long way toward changing the insurance company’s decision,” Mohler said, “I just needed to track him down.”

Mohler began working on the case on September 24. She said it took her days of walking door to door in the neighborhood that surrounds the housing authority apartment block before she was able to find someone willing to cooperate with her and lead her to the witness, a Cordele man named Eugene Bell whose sister has an apartment near Holt’s.

“When I finally was able to track down Mr. Bell, I told him, ‘I want your statement so I can help this man get the money he is due, but I know I’m going to have to earn your trust first’,” Mohler said.

“She earned my trust,” Bell responded with a smile. “I knew Mr. Bobby. I always spoke to him whenever I saw him while visiting my sister and he was always very nice. I thought what happened to him was senseless.”

Ultimately, Bell’s willingness to vouch for Holt helped Mohler convince the insurance company that it should pay out on Holt’s claim. The claim check arrived this week, and Mohler thought it would be an opportune time for Holt and Bell to meet.

“I think maybe God put me there at that time for a reason,” Bell said. “I’m glad I was able to make something a little good come out of all of this.”

Rufus Holt expressed his gratitude to both Bell and Mohler. The man and woman accused of killing his brother on March 18 will appear before a judge in Crisp County Superior Court on November 5. Both have entered not guilty pleas in the case.

Commissioner John F. King and the dedicated employees at the Office of the Insurance and Safety Fire Commissioner are committed to protecting Georgia families and consumers. The Consumer Services Division is specifically focused on investigating policyholder complaints in order to resolve disputes between insurers, agents, and policyholders. If you have an issue with an insurance company or agent, you can reach the agency at 1-800-656-2298.