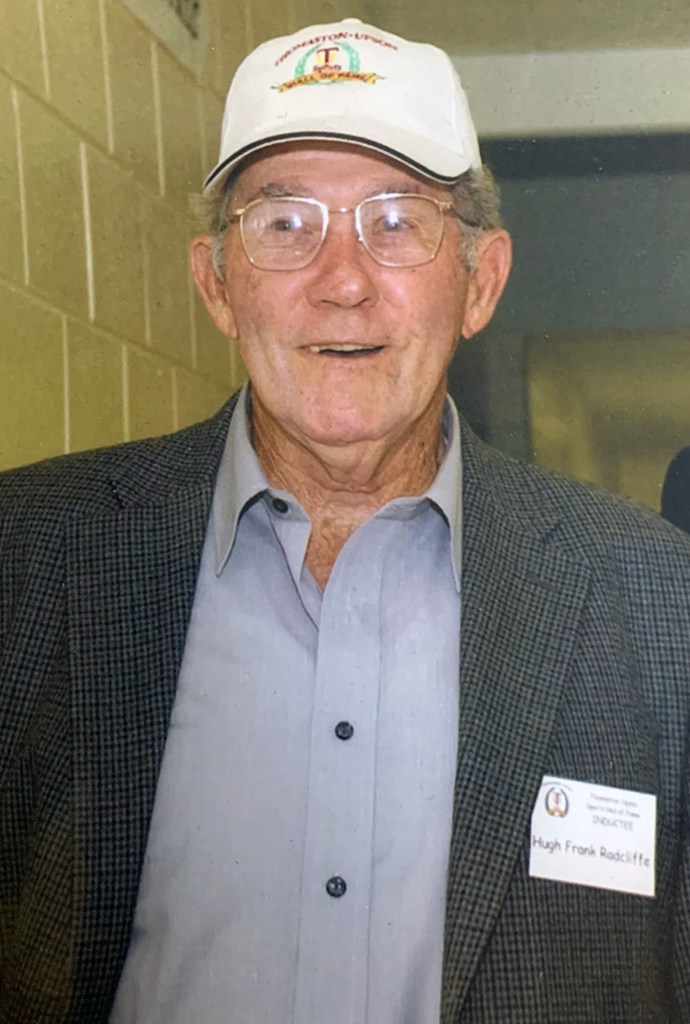 Hugh Frank Radcliffe passed away on November 10, 2019, after a long battle with extended illnesses. He was almost 91. He is survived by his adoring wife of 71 years, Marjorie Carraway Radcliffe. Funeral services for Mr. Radcliffe were held on Thursday, November 14, 2019, in the chapel of Fletcher-Day Funeral Home.

Hugh Frank Radcliffe passed away on November 10, 2019, after a long battle with extended illnesses. He was almost 91. He is survived by his adoring wife of 71 years Marjorie Carraway Radcliffe.

Hugh was best known for a high school baseball game against Lanier High School on April 19, 1948. He struck out 28 men in a 9 inning game(catcher’s error batter reached first).This feat led to him being recognized in the Atlanta Journal, Time/Life magazine, and Ripley’s Believe it or Not. This feat was one of the reasons he was one of the first ten inductees into the Upson County Athletic Hall of Fame. There were major league scouts at the game and he ultimately signed with the Philadelphia Phillies. The signing took place at the offices of W.L. New with Frank Boss, Hugh’s brother in law, in attendance. After 2 years in the Philly organization his talent was recognized by the New York Yankees and he finished his shortened career there. Unfortunately a pitching arm injury ended his promising major league opportunity.

Hugh left baseball and moved his family to Commerce, Ga. where he worked for the aforementioned W.L. New at the Commerce Telephone Co. as a lineman. His involvement in local sports and youth programs got him offered a job as assistant recreation director in Cordele, Ga. for Crisp County. He was promoted to director and during his years there affected the lives of hundreds of young men and women in positive ways. Just ask some folks about “Coach” Radcliffe and if they knew him be prepared to hear a story, or two.

Another job offer and he went back to the Commerce area to work for the telephone company now called Altel Corp. He retired from that job as the outside supervisor after 28 total years of service.

He made the most of his retirement years often traveling to see friends and family from south Florida to Tennessee. Golf clubs and fishing gear never too far away.

Hugh was an outgoing and honest person who was always willing to help someone in need. Whether you knew him as Hugh Frank, Dad, Uncle Hughey, Radtootie, or Coach he will always be our LEGEND.

In lieu of flowers the family ask donations be made to: Thomaston-Upson Sports Hall of Fame C/O Jim Fowler, 909 Crystal Drive, Thomaston, GA 30286
Fletcher-Day Funeral Home of Thomaston is in charge of all arrangements.