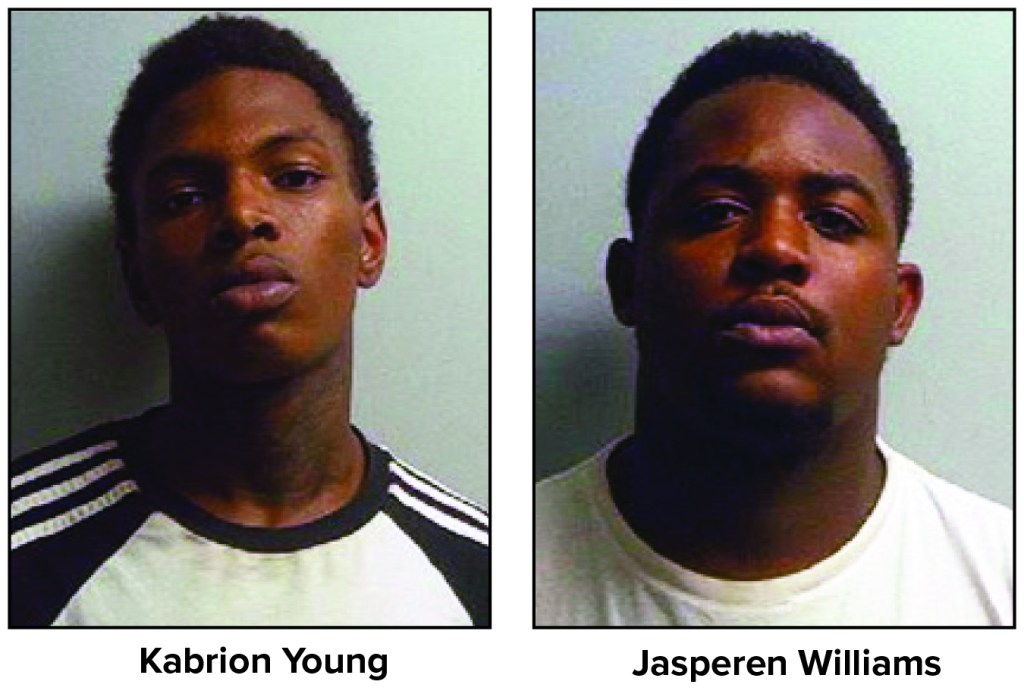 Kabrion Young (left) and Jasperen Williams were arrested this week in connection with a string of auto break-ins that occurred last weekend in the area of North Penia Road and Ga. Hwy. 257.

It took just a few days for investigators with the Crisp County Sheriff’s Office (CCSO) to arrest suspects believed to be involved in a rash of vehicle break-ins last weekend at residences in the area of North Penia Road and Hwy. 257 North.

CCSO responded to a total of 11 entering auto reports from the area. Firearms, electronics, and bank cards were among the items reported stolen from vehicles that were parked at their owners’ residences. Deputies quickly identified 19-year-old Kabrion Young of Cordele as a suspect in the crimes.

On Tuesday, Nov. 26, CCSO investigators, “received information regarding a possible location of items that were stolen in the recent entering autos,” according to an agency press release. “Further investigation led to the arrest of Jasperen Williams, a 20-year-old male resident of Cordele, Georgia, at approximately 11 a.m. Williams is charged with theft by receiving stolen property. The initial suspect in the entering autos, Kabrion Young, was also arrested [Tuesday] at approximately 3:10 p.m. Young is charged with 12 counts of entering autos, possession of a firearm during the commission of a crime, and theft by receiving stolen property.

Deputies have recovered a rifle, a handgun, several bank cards, and numerous electronics, including laptop computers. Investigators continue to follow the case and were assisted by the U.S. Marshal Service’s Southeast Regional Fugitive Task Force in the arrests.

Although suspects have been identified and arrested, residents should take precautionary measures to minimize potential losses.

“Please remove all valuables from your vehicles and lock your vehicle doors. Please keep an inventory of their valuables. Having a property record is critical if you are ever the unfortunate victim of a crime. Log all serial numbers or identification numbers as well as take images for property records,” CCSO advised in a press release.

Young was one of five teenagers arrested on similar charges in July of 2018 following a string of vehicle break-ins that occurred in the vicinity of Old Hatley Road and Aberdeen Circle.