Cougars to ‘blue out’ the Den on Friday 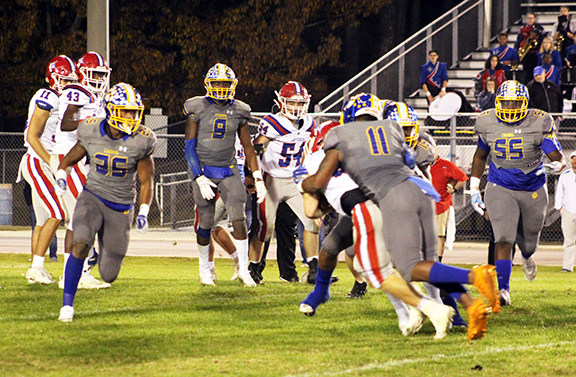 Crisp County High's Christopher Paul, Jr. (11) wraps up a Jefferson High ball carrier during last Friday's state quarterfinal win as Cougar defenders Jayren Fox (25), Preston Lavant (9), and Jh'quan Bass (55) converge on the play. The Cougars host Jenkins High School of Savannah on Friday in the state semifinal game. Fan are encouraged to help "Blue Out" the Cougar Den in support of the team.

Cougars fans are encouraged to sport as much blue as their wardrobe can stand on Friday when Crisp County High School plays host to Jenkins High School of Savannah in the state football semifinals.

CCHS (10-3 overall record) is on the verge of history after knocking off the Jefferson Dragons by a score of 22-20 this past Friday night in Cordele in the quarterfinal round of the GHSA class AAA state playoffs.

With the third round victory, the Cougars are now one win away from having the chance to play for a state title for the first time in school history. Their next opponents, the Jenkins High School Warriors of Savannah (12-1 record), will be making the trip to Cordele for the semifinal round of the playoffs this Friday night.

Jenkins will enter Friday night’s game on an 11-game winning streak that includes playoff victories over Adairsville by a score of 41-0, Dawson County by a 42-9 final, and North Murray last Friday by a final tally of 41-14. The Warriors’ only defeat this year came in their second game of the season on the road at 5A South Effingham by a final of 29-26 in overtime.

According to their logged stats on MaxPreps, the Warriors have used a balance of the run and pass attack on offense to post an average of 40.4 points per contest this season.

A pair of juniors have led the Jenkins offensive output all season according to the team’s stat sheet. Junior running back Damozzio Harris has posted 27 total touchdowns on offense this season for Jenkins, while also totaling 1656 rushing yards on the year. Junior quarterback Patrick Blake has led the air attack for the Warriors with 22 touchdown passes and 1823 yards, while throwing only three interceptions. Three different receivers have caught at least 20 passes this season for Jenkins, with senior Kyree Mclean leading the group by posting eight touchdown receptions and 413 yards on 24 total catches.

The Warriors’ high-scoring offense is assisted by an equally strong defensive unit, as the Jenkins defense has dominated most of their opposition this season, allowing just over seven points per game on the year. Overall the team has logged 37.5 sacks this season, with senior defensive end Taurus Simmons accumulating nine of those. Simmons also leads the team in tackles with 75 on the year, 23.5 of those for a loss of yardage.

The stingy Jenkins defense has forced 28 turnovers on the year, with 15 interceptions and 13 fumble recoveries. Nine of those takeaways have resulted in Warrior touchdowns, five on interception returns and four on fumble returns. Senior defensive backs Darius Bush and Ronald Cooper are tied for the team lead in interceptions with three apiece, while senior defensive end Daylan Dotson leads the fumbles forced and recovered categories with seven and five respectively.

Jenkins has also credited four different players with a blocked punt so far this season, and the special teams portion of the statistics has two punt return scores by Cooper and a kickoff return touchdown by Bush listed.

The Cougars have one opponent in common with Jenkins this season, that being Southeast Bulloch. Crisp defeated Southeast Bulloch 46-0 in the first round of the playoffs last month, while Jenkins matched up with the Yellow Jackets in region play back in October and also easily won by a 34-3 final.

Crisp County will enter the semifinals having won seven games in a row, and they will look to continue their momentum Friday night by using their strengths to counter those of their opponent from Savannah. The Cougars have used a big play offense and stout defense of their own to reach their first semifinal appearance since 2016.

Those strengths were on display for CCHS this past Friday night in the third-round win, as the Cougars posted 308 total yards on offense, while the defense kept Jefferson in check during the first half before making several crucial stops in the second half to finish the game off for the two-point win.

AJ Lofton sparked the Crisp offense during the first half with two rushing touchdowns, a passing score to Katorian Raines, and a two-point conversion run that ended up being the difference on the scoreboard. Sophomore running back Marquise Palmer paced the Cougar offense once again with 23 rushes for 137 yards, while also catching three passes from Lofton for 28 yards.

Defensively, Crisp got a solid night from most of their usual key contributors on their way to the quarterfinal win. Trenton Richey led the team in tackles on the night with 10 in total, while Kamron Moate, Preston Lavant, and Jayren Fox each pitched in nine total stops. Chris Paul Jr. and Perici Gaines both piled up seven stops apiece, with Sirad Bryant accumulating six total tackles.

Nick Mercer had the only Cougar sack of the night to go with five tackles, with Lofton also making five stops and forcing a Jefferson fumble that stopped the visitors’ late comeback attempt. Jh’quan Bass, Javan Hardemon, Kanye Spivey, and Damion Cross were also credited with some key tackles Friday night, and J’kobe Harris had two stops to go with the recovery after Lofton’s forced fumble.

Last Friday’s contest in Cordele featured a large crowd and an electric atmosphere, and the upcoming game should be no different in that aspect.

Kickoff from the Cougar Den on Friday night is set for 7:30 p.m.