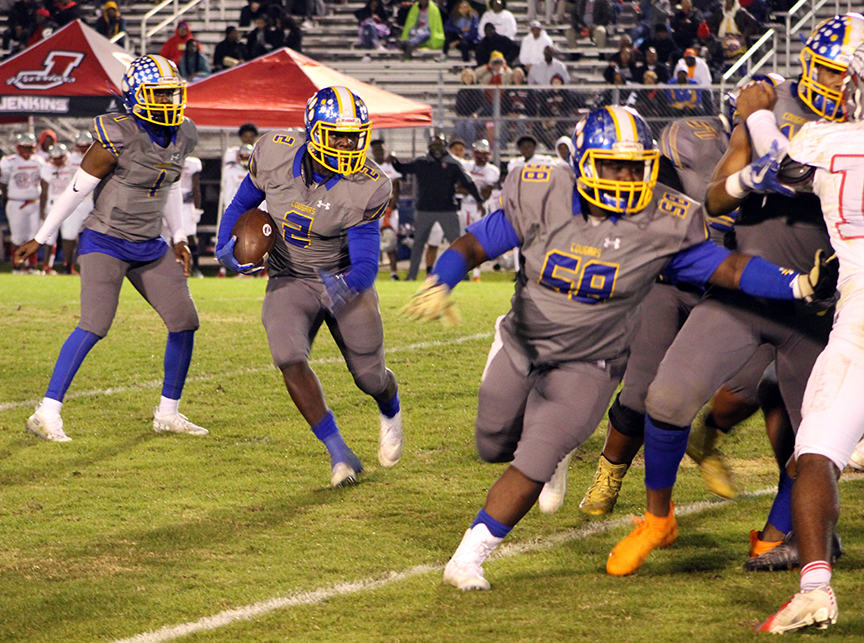 The Crisp County High School football team (11-3 record) defeated the Jenkins High School Warriors (12-2) in the GHSA class AAA state semifinals by a final score of 14-6 on Friday night in the Cougar Den.

The Cougars will now play for a state championship for the first time in school history when they matchup with Cedar Grove on Saturday in Atlanta.

The game remained scoreless for the majority of the first half until Jenkins got on the scoreboard with a short touchdown run by Damozzio Harris. The resulting Warrior point after attempt was unsuccessful, leaving Jenkins ahead by a score of 6-0 at the 1:05 mark of the second quarter.

The Cougars drove down inside the Jenkins 30-yard line on the ensuing possession looking to get points on the board before the half, but the Warriors blocked a 43-yard field goal attempt by Connor Richmond as time expired in the period.

The teams swapped punts to open up the third quarter, but Crisp County’s second offensive drive of the half resulted in an AJ Lofton touchdown run for a CCHS lead.

The Cougars drove 83 yards on 15 plays before Lofton carried the ball over the goal line on a five-yard scoring run to cap off the possession, and Richmond’s extra point subsequently gave CCHS a 7-6 lead with 1:45 to play in the period. Lofton and Marquise Palmer carried most of the load on the drive, while Cortez Thomas and Sirad Bryant each had key catches for first downs to help keep the offense rolling.

The defense from both sides continued their strong efforts over the next few drives, but Crisp later added to their lead in the fourth quarter when Lofton picked up his second touchdown of the night on another five-yard run. Palmer helped out on the drive with some tough runs behind the CCHS offensive line, which blocked well all night against the tough Jenkins defensive front. Richmond’s second made point after of the night put the Cougars ahead 14-6 with 2:25 to play in the game.

Jenkins completed a few passes on the ensuing drive in an attempt to tie the game, but Bryant came up with an interception in the end zone to seal the contest for the Cougars. Crisp was then able to line up in victory formation for the kneel downs to run off the remaining minute of time from there.

Nick Mercer and Kamron Moate each had a sack and some crucial tackles on the night to help lead the Cougar defense. Jayren Fox, Preston Lavant, and Chris Paul Jr. were just three of the other Crisp County defensive players that made their presence known on the night, with several stops apiece.

“We had a lot of adversity in the first half, and I think we hurt ourselves, but that second half we came back,” said Coach Harber. “The defense has played so well all year long, so I was glad to see the offense finish the deal tonight.”

The Cougars will matchup with Cedar Grove (12-2) next Saturday afternoon at 1 p.m. for the AAA state championship. The game is scheduled to be played at Georgia State Stadium, better known by most as Turner Field.