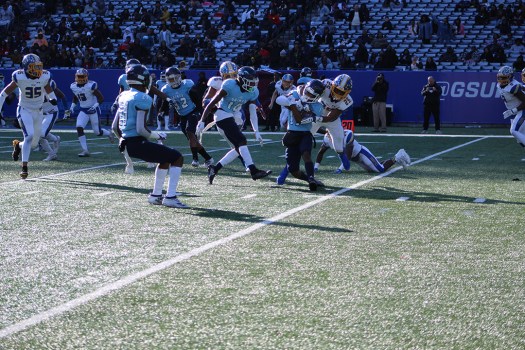 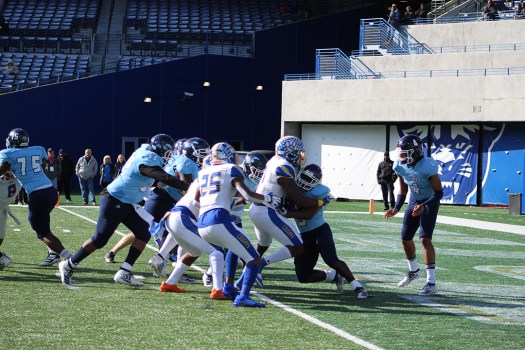 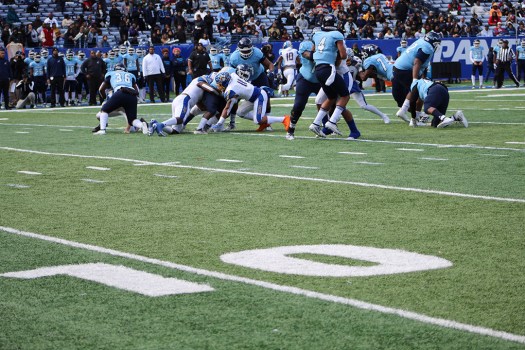 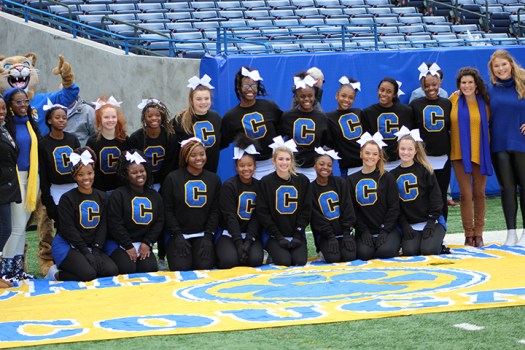 One of the best seasons in Crisp County High School football history came to an end with a Cougar defeat at the hands of Cedar Grove by a score of 21-14 in the GHSA class AAA state championship game at Georgia State Stadium in Atlanta on Saturday afternoon.

The Cougars (11-4 final record) put up a strong performance until the final whistle but ultimately came up a possession short against the Saints of Cedar Grove (13-2), who have now won three state titles in the last four years.

The first half of the contest was a defensive struggle that saw several punts, very little offense, and just one touchdown.

The Cougars had the first big scoring chance of the game on their second possession of the first period after quarterback AJ Lofton threw a third down pass up the sideline to Sirad Bryant, who caught the ball and took it down inside the Cedar Grove 30-yard line for a 43-yard gain. Lofton and running back Marquise Palmer split carries over the next few plays to get Crisp down to a third-and-goal situation from the one-yard line, but the Saints’ defense came up with two consecutive goal line stops to keep CCHS out of the end zone and take over possession as the opening quarter came to an end.

The teams swapped a few punts over the next several drives, but Cedar Grove ended up putting the first points of the game on the scoreboard on a two-yard touchdown run by Chavon Wright with just over 40 seconds to go in the second quarter. The point after attempt was successful, giving the defending champions a 7-0 lead at halftime.

The Cougars started the second half with possession of the ball but they were forced to punt, and Cedar Grove took advantage of the stop by subsequently putting together their second scoring drive of the game. Wright capped off the possession with his second touchdown of the contest, this time on an 18-yard run. The point after put the Saints ahead of Crisp by a score of 14-0 with 6:44 to go in the third period.

After trading punts and field position over the next couple of drives, Crisp took over possession of the football at the Cedar Grove 37-yard line, and they took advantage of the short field with their first score of the day. Lofton picked up a key first down with a nine-yard carry down to the Saint 20-yard line on a fourth down attempt, and Palmer finished the drive off from there with a 20-yard touchdown run to get the Cougars on the board. Senior kicker Connor Richmond subsequently added the point after to get CCHS within seven points of the Saints’ lead at 14-7 with just 18 seconds to play in the third quarter.

Cedar Grove answered shortly after with a 17-yard touchdown pass from Austin Smith to Rashod Dubinion. The score and extra point put the Saints on top 21-7 with 9:43 to go in the game.

Lofton led Crisp down the field on the ensuing drive with some key runs and a pass to Katorian Raines for a crucial first down, but the Saints ultimately came up with another fourth down stop inside their own 10-yard line to maintain their 14-point lead.

Cedar Grove attempted to run out the remaining few minutes of time from there, but the Cougars were not quite finished with their comeback attempt.

Crisp held the Saints to a fourth down punt with less than two minutes to play in the game, and CCHS senior linebacker Jayren Fox blocked the kick, giving Latravious Walker an opportunity to scoop the loose ball up and take it into the end zone for a 27-yard return touchdown. Richmond’s extra point cut the Cedar Grove lead to 21-14 with 1:18 to play in the contest.

The blocked punt return score set up a Cougar onside kick attempt for a chance at one more possession, but the Saints came up with the recovery on the play and they ran out the remaining time to come away with the 21-14 win.

Palmer finished the game with 19 rushes for 54 yards to go with his touchdown, while Lofton ran the ball 13 times for 48 yards and completed three passes out of 10 attempts for 59 yards. Bryant, Raines, Palmer and Cortez Thomas all had one reception apiece for the CCHS offense.

Senior offensive lineman Colton Oliver made his 52nd career start in the game. He, along with Fox, Richey, and the rest of the Crisp football team’s senior class of 2020 have helped make history for the program. They led the Cougars to the first state title game appearance in school history, and also played a key role in the four consecutive region championships, which had also never been done before by Crisp County’s football team.

“Make no mistake about it… we will be hunting a bigger one next year,” CCHS Head Coach Brad Harber said on his twitter account with a picture of the state runner-up trophy following the game.

“To the seniors, you will forever be in my heart, and all of you will be a success! To the team, you have made your coach PROUD. To CORDELE, thank you ALL for being there today,” Harber added in his twitter post.

The traveling support for the Cougars was noteworthy, as Crisp County fans easily filled the majority of the designated away stands and spilled over into other sections of the stadium to cheer on their team in the state championship game.