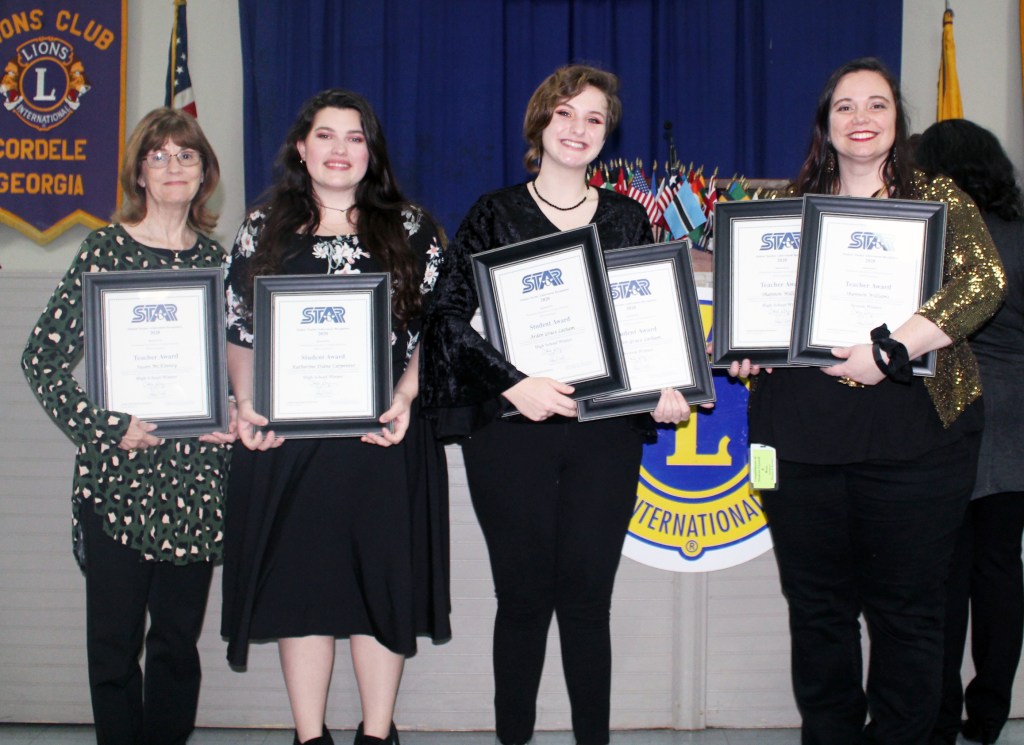 Two very special Crisp County students, along with a teacher of their own choosing, earned recognition as the top academic performers in their respective schools at Tuesday’s meeting of the Cordele Lion’s Club.

Crisp County High School senior Arden Latham was awarded the STAR Student award for both her school and the county at large. She chose CCHS teacher Shannon Williams, who taught her honors ninth-grade literature and composition, as her STAR Teacher.

Crisp Academy senior Katherine Carpenter was named STAR Student for Crisp Academy and chose Susan McKinney, who taught her both chemistry and biology.

Among other criteria based solely on academic performance, STAR Student recognition is traditionally awarded to the school’s highest scorer in the SAT college entrance exam.

McKinney, who has been chosen STAR Teacher in Crisp County 11 times now (most recently in 2019), said she views it as one of the highest honors a teacher can receive, because it granted by a student.

In her comments, McKinney called Carpenter, “intelligent, kind, and honest. She is always prepared and is always willing to do her very best.”

Carpenter, the daughter of Bo Carpenter and Jennifer Carpenter, is the recipient of the Georgia Merit Award, the Hugh O’Brian Leadership Award, and has the highest or second-highest grade point average in all her high school classes. She plans to study psychology and criminal science at Valdosta State University.

Carpenter said that studying under McKinney helped her gain a greater understanding of the laboratory sciences.

“[McKinney] works with everyone and is truly one of the most understanding teachers I’ve ever had,” Carpenter said.

Latham was equally complimentary of Williams, who was also chosen STAR teacher in 2016, when she was also named the district’s teacher of the year.

“She is one of my dearest friends, one of my greatest teachers, my confidant, my supporter, my guide, and my mentor,” Latham said of Williams.

Latham, the daughter of Dr. Harry and Mrs. Valerie Latham, has won numerous musical accolades at the state, district, and region level and serves on the Crisp County Youth Advisory Council and Georgia Teen Institute. She plans to pursue a pre-med biology degree after graduation from Crisp County High School and eventually become a physician.