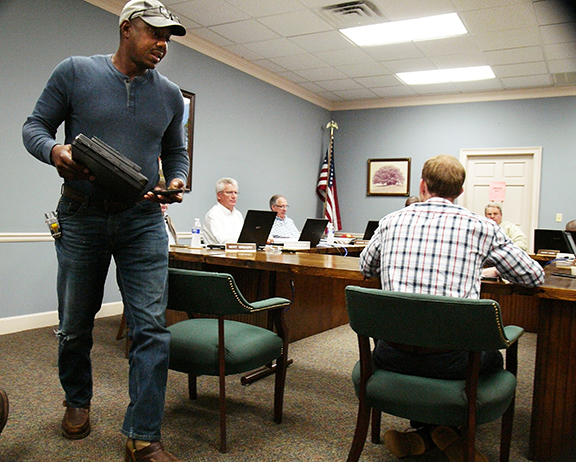 Contractor Billy Granville (left) walked out of a meeting with the Dooly County Commission over a building inspection issue.

By Neil B. McGahee – Dispatch Correspondent

Shortly after the prayer and Pledge of Allegiance, Billy Granville, a construction contractor, appeared before the council to complain about an issue with building inspections.

Granville said he had given sketches of a home in Lilly to Jeremy Head of Charles Abbott Associates, a building safety and engineering company from Atlanta that is contracted with the county to conduct building inspections.

“I gave him sketches showing exactly what we were going to do to the house,” Granville said, “and he approved it just like the sketches were. Later I heard that he (Head) said he wanted the foundation built to code and he also thought the house was sound and would be less costly for the homeowner if we did the exterior work also. I was told that he said ‘all of it or none of it.’”

Granville said the homeowner was elderly and on a fixed income and the work would have been nearly impossible for her to afford.

“If Mr. Head wanted all of this done, that would have been the time to mention it,” Granville said. “Not wait until we’re done. Not one time did he say, ‘Hey, you need to pour concrete or you need to put in steel. It’s too late in the game to do that. That would mean removing the air conditioners, the plumbing and the wiring and jacking the house up, crawling under the house and laying block. That’s just too much.”

Head countered that he first met Granville at the job site.

“There was nothing,” he said. “Mr. Granville sketched it out on his truck and what he showed me was all framing. It showed the spacing of pillars but it doesn’t show the construction of the pillars. So what was approved was just those details that were provided. At that point, it becomes the responsibility of the contractor to know construction methods.”

Head said the initial inspection prompted a closer look because there were no water joints in place in the concrete blocks.

He said that an engineering evaluation showed the work didn’t meet code and wasn’t structurally sound.

“This house is completely gutted,” he said. “When you walk in the front door, you’re looking at a dirt floor, no framing, no pillars — there was nothing but four walls and a roof. I mentioned to him that I can’t be here at the job site all the time to tell you every detail of how to construct a house. That’s where state licensing comes in and the obligation to know how to be a contractor. The responsibility is on him to know how to construct.”

“You said that house was completely torn apart,” he asked. “How were you standing in it? We were talking inside the house. The living room was there; the dining area was there, half of the kitchen was there. You were standing in the house so that’s a lie.”

Head replied they were standing in the foyer, the only area of the house that had a floor.

Councilman Tony Lester interrupted and asked how much it would cost Granville to go back and make the repairs needed. Head replied that it would cost $30 to $40 a square foot or about $20,000.

Lester wondered when the obligation to enforce the law is replaced by common sense.

“We are arguing over the minimum standard,” Head replied. “This is the bare minimum.”

As the tension in the room rose palpably, the two men began arguing loudly until County Attorney Bert Gregory advised them that the rules of order required them to speak directly to the Commission chair.

Council chair Terrell Hudson recommended that the two men meet and try to work out a solution, but Granville declined.

“That don’t work for me,” he said. “I’ve been back and forth on this house for eight months and I’m not going up there again. He should have done his job. Make the ruling now and be done with it.”

With that, Granville collected his papers and left the room.

Another hot button issue followed as several Unadilla citizens living along Posey Road voiced their complaints about pipes running treated pond water through their property to an application site for a wastewater treatment facility.

After citizens spoke their mind about the situation, council

In other business, the commissioners

Learned that a tarp had been placed over the leaking roof of the Department of Family and Children Services building on E. Union Street

Approved a request from the District Court Administrator for $100,365 for Dooly’s share of the Cordele Judicial Circuit.

The next regular commission meeting will be held on Thursday, March 5 at 9am at the commission office.