No quick fix to roads damaged in storm 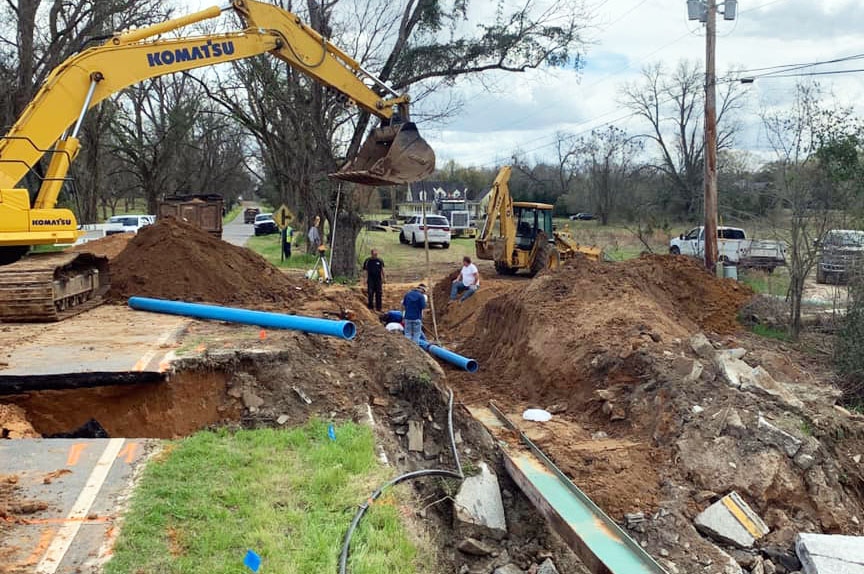 Crisp County Public Works Department employees work to restore water service to residents in the North Valhalla subdivision and nearby areas Monday at approximately 6 p.m. in this photo taken by Crisp Sheriff Billy Hancock. Debris from Cannon Road damaged the water main and left residents without service over the weekend.

Crisp County Public Works Director Carl Gamble expressed some emotions during his report to members of the Crisp County Board of Commissioners at their regular meeting on Tuesday.

“There’s not a road in Crisp County that didn’t suffer some sort of damage, whether major or minor,” Gamble said about recent flash flooding, adding with a quaver in his voice, “and our employees are all tired, but we have a lot of work left to do, and we’re going to get it done.”

Gamble kept his report brief and excused himself so he could return to work. County Administrator Clark Harrell subsequently told commissioners that the county’s public works employees have been working literally around the clock since storms dumped some six inches of rain and wrecked havoc on the area last week.

Much of that work has centered on Cannon Road near Lake Blackshear, which Harrell said failed in two places. The resulting debris then damaged an 8-inch water main that serves residents in the North Valhalla subdivision and nearby areas. Water service was restored Monday evening, and authorities said they expect a boil-water advisory for the area to be lifted sometime late Tuesday.

The repairs to Cannon Road itself, however, will take more time. Harrell noted that it will be “several” months before conditions return to normal. Crisp County Sheriff Billy Hancock said he has initiated a plan to ensure that the impassible stretch of Cannon Road doesn’t impede delivery of public safety services in the area.

“We will keep flashing signage and a fire truck stationed there as work continues in the area,” Hancock said, adding that a temporary pad will be placed on the ruined roadway so that public safety vehicles can pass through the area one at a time in the event of an emergency.

Hancock also praised members of the commission for their decision to wait on a permanent solution to the problems on Cannon Road.

“A $286,000 temporary bridge was on the way, but after you reviewed the situation and realized we could have a $500,000 permanent bridge built without much difference in wait time, you made the right call in my opinion,” he said.

Commissioner Wallace Mathis praised Hancock and his agency’s responsiveness during the flooding event. Hancock in turn said that Gamble’s public works team deserves every bit as much praise as his deputies.

Harrell noted that in addition to hard work, it will take public funds to realize road repairs. He told commissioners he met with local resident and former state representative Johnny Floyd, who now represents the area on the state transportation board. Floyd hand-delivered a list of needs to state officials who can help provide emergency funding on Tuesday.

Harrell also noted that county employees are identifying locations where simple repairs won’t suffice and new infrastructure must be built. He pointed specifically to the box culvert under Cannon Road, saying this is the third time the culvert has failed and, under the auspices of the county’s emergency operations plan, he has already contracted with Southern Concrete to begin work on a new span.

Among much other commission business, the board:

-held a public hearing regarding a request from Rose Land, LP to rezone a parcel of property located at 1179 Hwy. 280 W. from general commercial to heavy commercial. Rose Land’s Bill Goff said the company plans to grade the property and use it for storage. No one spoke in opposition to the request

-appointed Ray Ray Rollins to the Recreation Department’s Board of Advisors.