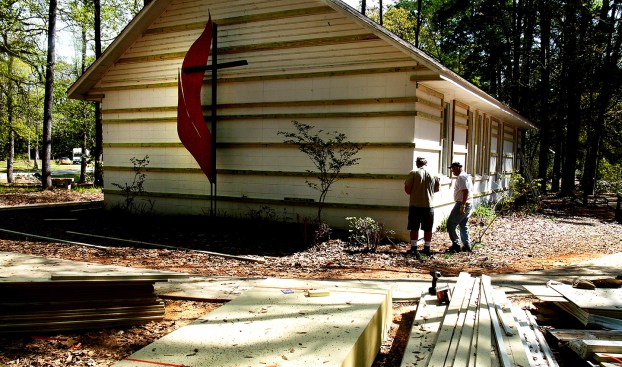 Wes Osborn, left, and Jim Bixler measure the exterior walls of the chapel for replacement planks.

The historic Dooly Campgrounds hosted a different kind of camper — members of the NOMADS, not to be confused with the southern California motorcycle club — a group of predominately Methodist volunteers that haul their campers and tools from one religious site to another, donating their skills to perform repairs or maintenance to them.

“My wife, Lisa and I are from Big Stone City, South Dakota, and there are volunteers here from Illinois, Indiana, Connecticut, Vermont and Ohio,” said Jeff Busch as he measured wooden splints to be applied to the sides of the campground chapel. “You don’t have to be Methodist to volunteer. When we got involved, I was Catholic and Lisa was Lutheran, but we decided we liked this ministry so we became Methodists and now we spend all of our time — usually 12 days per project — doing whatever needs to be done.”

NOMADS began in 1988 in Texas’ Rio Grande Valley when a group of so-called “Winter Texans,” — Upper Midwesterners that travel to Texas to escape the brutal winters — approached local churches and offered their services to repair or maintain local churches. As membership grew, the group incorporated as an organization of the United Methodist Church and offered year-round projects to churches in need of repairs. The effort was heightened in 2005 as the group concentrated on disaster recovery efforts in Mississippi after Hurricane Katrina. Today, the NOMADS donate more than 110,000 hours of volunteer labor each year.

The campground, situated along Sandy Mount Creek, near Vienna, traces its beginnings to 1874 as a United Methodist camp meeting site. The first structure was the “Tabernacle,” a canopy made from hand-hewn timbers and filled with wooden pews to host revival meetings. Later, it was expanded to include cabins, a dining hall, recreation fields and a swimming pool to accommodate longer-term spiritual retreats.

“What’s really interesting is the wood being used to repair the outer buildings is all from trees blown down in the campground by Hurricane Michael,” said Bert Gregory, Dooly County Attorney and advocate for the campground. “It’s wonderful to see it being used for this purpose.”

After the NOMADS finish their work, it’s off to the next job according to Busch.

“We don’t know yet where that will be, but when we do, we will hit the road again,” he said.