Remembering those who gave all 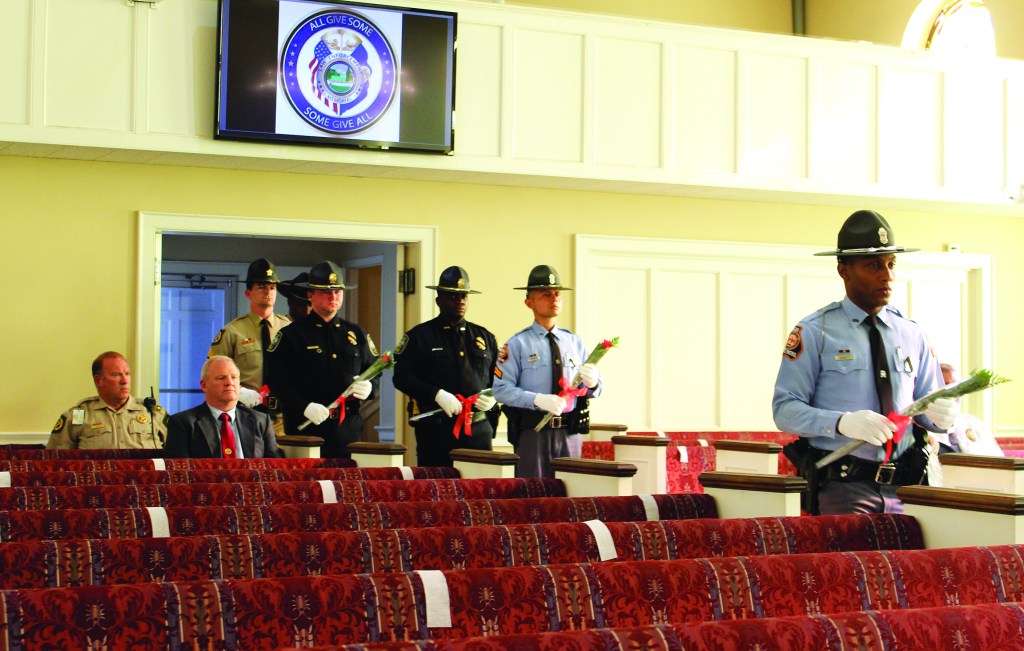 An honor guard comprised of representatives from the Cordele Police Department, the Crisp County Sheriff’s Office, and Georgia State Patrol Post 30 laid flowers on empty chairs left vacant in honor of the seven local law enforcement officers who have been killed in the line of duty throughout Crisp County’s history at Thursday’s Law Enforcement Memorial Service at Pinecrest Baptist Church.

The Crisp County Sheriff’s Office on Thursday held a brief, yet powerful, memorial service for the seven local law enforcement officers who have been killed in the line of duty throughout Crisp County’s history.

Crisp County Sheriff Billy Hancock noted the service, held at Pinecrest Baptist Church and live-streamed on social media, was intended to be open to the public, but those plans were sidelined due to the COVID-19 pandemic. Over 2,000 viewed the ceremonies on social media, and the service will be rebroadcast on WSST on Wednesday, May 20 at 7 p.m.

“It’s important to the families of the people we’re about to honor, and it’s important to each of us that put on the badge every day and the weapon and leave our homes, not knowing whether we’ll return or not,” Hancock said.

Before Williams took the pulpit, Hancock praised the first-term state representative for his commitment to public safety.

“He’s a family man, and he cares about this community. During the last legislative session he would call and ask, ‘Is there anything law enforcement needs?’ That means a lot to all of us who serve the community in public safety,” Hancock said.

“I’ve known a lot of you all my life,” Williams said. “I want to thank you guys for what you do each and every day. It’s not just this week, but it’s every single day that I’m grateful for the work you do for us.”

Williams then read the National Police Week proclamation, which states, in part, “WHEREAS, as members of the Crisp County Sheriff’s Office play an essential role in safeguarding the rights of freedoms of the citizens of this country; and WHEREAS, it is important that all citizens know and understand the problems, duties and responsibilities of their Sheriff’s Office, and that members of the Crisp County Sheriff’s Office recognize their duty to serve the people by safeguarding life and property, by protecting them against violence or disorder, and by protecting the innocent against deception and the weak against oppression or intimidation; and WHEREAS, the Crisp County Sheriff’s Office has grown to be a modern and scientific law enforcement agency which unceasingly provides a vital public service; NOW, THEREFORE, I, Representative Noel Williams,  call upon all citizens of Crisp County and upon all patriotic, civil and educational organizations to observe the week of May 10 -16, 2020, as Police Week with appropriate ceremonies in which all of our people may join in commemorating police officers, past and present, who by their faithful and loyal devotion to their responsibilities have rendered a dedicated service to their communities and, in doing so, have established for themselves an enviable and enduring reputation for preserving the rights and security of all citizens.”

Cordele Police Chief W.H. Forrest, who was assassinated in front of a local hotel on Feb. 16, 1909,

Arabi Town Marshal F.O. Epps, who was killed by a subject he was attempting to apprehend for public drunkenness on July 9, 1938,

Cordele Police Sergeant C.H. Watson, who was shot and killed by a suspect who stole Watson’s service weapon and used it against him while being transported to jail on Oct. 18, 1970,

Cordele Police Sergeant W.R. Haralson and Georgia State Patrol Trooper J. Young, who were killed by a suspect who stole the trooper’s service weapon and used it against them while being administered a breath test on May 4, 1975,

And Trooper J.K. Stewart, who was killed when he lost control of his cruiser while responding to an emergency call when he encountered a loose horse on U.S. Hwy 280 on April 27, 1991.