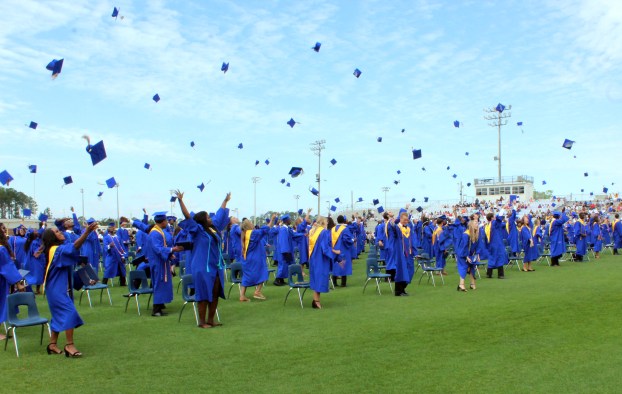 Members of Crisp County High's Class of 2020 toss their caps in the air at the end of graduation ceremonies held Saturday morning.

The 277 members of Crisp County High School’s Class of 2020 officially graduated at commencement ceremonies held at the Cougar Den football field on Saturday. Graduation was initially planned to be held on Friday evening, but rain pushed the event back.

CCHS Principal Rusty Sowell said that 66 graduates – nearly 25 percent of the class – graduated with honors and the CCHS Class of 2020’s overall graduation rate was 90 percent. Those two figures are the school’s highest in history.

Read all about Saturday’s graduation, including speeches from Valedictorian Haley Maddison Hughes and Salutatorian Madison Laney Waters, in Wednesday’s print edition of the Dispatch.

The areas of the Community clubhouse and behind the Crisp Regional Medial Office building are flooded, please take caution when... read more