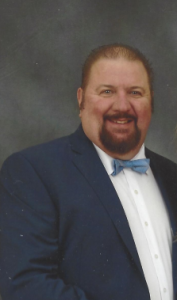 Arthur was born on July 26, 1964 in Cordele, Ga. He grew up in Cordele and then relocated to Statesboro, Ga in 1984 where he resided for 36 years. Arthur was an entrepreneur and a dish network retailer for many years. He had a passion for cooking and fulfilled a lifelong goal of operating his own restaurant for a few years. There are not many people who do not know of his Woo Dang BBQ sauce. He was the jack of all trades and had many business ventures.

Arthur had a passion for Georgia Southern football. Arthur was TRUE BLUE through and through. He loved to spend his time at the prettiest little stadium. Arthur also loved to spend his days out on Lake Sinclair enjoying God’s beauty. Going out on the boat with his family and grilling out and sharing food with anyone near him brought him joy. He was known for his charisma and infectious laugh that could fill a room.

He was preceded in death by his father, Henry Arthur Barefoot Sr.

He is survived by his mother, Joyce Barefoot, the mother of his three children, Felicia Barefoot, and their three daughters, Tiffany Barefoot Phillips (Mike), Autumn Barefoot, and Savannah Barefoot, his brother, Scott Barefoot (Lyndonna), his sister, Joanne Clark (Russ), his partner Karen Hudgins O’Neal, and several cousins, nieces, and nephews.

A funeral service will be held on Saturday, October 10, 2020 at 2:00 p.m. in the Chapel at Deal Funeral Directors, Statesboro, Georgia. Visitation with family and friends will be held one hour prior to the service, beginning at 1:00 PM.

All flowers can be sent to Deal Funeral Directors.