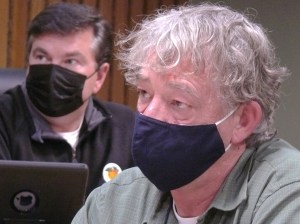 Roland McCarthy took his seat Tuesday at the Cordele City Commission, something he has done regularly as Finance Director for the last three years. But yesterday, he occupied a different seat — the one reserved for the City Manager.

McCarthy was named to the post after a unanimous vote by the City Commission.

“Only two people applied for the position,” said Commission Chair John Wiggins. “He was the only one that wanted the job permanently. The other applicant wanted to take the job on an interim basis until a permanent hire was made.”

McCarthy assumes the position held by Edward Beach, who died in early December.

McCarthy, a Maine native, learned his specialties courtesy of the United States Marine Corps. He joined in July 1979 and served as a comptroller, chief accountant and internal auditor for the Corps. He left the Corps in 2001 and earned a bachelor’s degree in management and accounting from Park College in Missouri.

McCarthy was hired by the City of Cordele in 2017 as the Finance Director.

“Roland is a good man,” Wiggins said. “I think he will make a good city manager.”