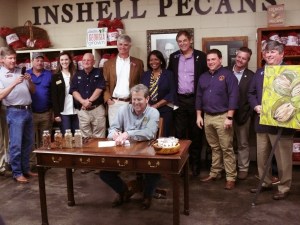 Surrounded by anybody who is somebody in Dooly and Crisp counties, Gov. Brian Kemp signed two new bills into law at Ellis Brothers Pecans in Vienna, Friday.

As ominous dark clouds settled over the Ellis Pecans store, the planned outdoor meeting was scrapped in favor of one inside.
Sitting behind a small desk, Kemp signed House Bill 693 that gives the right of way on Georgia streets and highways to farm vehicles and Senate Bill 222, that designates the pecan the official state nut, ending once and for all, the debate over selecting the pecan over the peanut.

State Senator Larry Walker said Georgia is the number one producer of pecans and peanuts, but explained that a peanut is not an actual nut, rather it is in the legume, or bean, family.
University of Georgia Horticulture Professor Lenny Wells says pecans are not nuts either. He says they are drupes, a fruit with flesh on the outside and a big seed in the middle.”