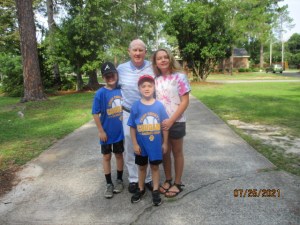 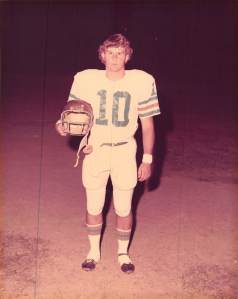 I don’t readily recall the first time a met Cliff Hearn. I was very young maybe 5 years old or so. He was my older brothers age and a ball player. I use to tell him,  hey you know how they got the name Pinto? As in the Ford Car from the early 70’s. He bit and said no. I said they stuck a Pin in my toe, they got PINTO. I know that was corny and silly but hey folks I was about 6 or 7 at the time. Needless to say from then till now Cliff has never let me forget it.

Johnnie Cliff Hearn Jr. a lifelong Crisp County resident is married to the former Wanda Barry of Cordele and they have two kids Hagen and Heather, they also have 3 grandchildren that keep them plenty busy; Brayleigh, Braxton and Briggstown Denham. Cliff is an agent with Akin Insurance of Cordele. To say that Cliff Hearn has been integral part of the Crisp County Sports scene for 60 years is no exaggeration. Cliff was not only a great player but he was also a great player in many sports and his knowledge of the games and the sports history of our county is unmatched. For several years in the writing of the “where are they now series” for the Dispatch if not for his insight and retired Sports Editor Harvey Simpsons memories, none of this would be possible.

Well let’s just take a look at some of Cliffs exploits. At 5’7 being a “giant” in sports is very hard to do but Cliff managed it. First of all he lettered in four sports Football, baseball, basketball and Golf. As anyone who has ever played high school sports can attest that is no easy feat. Cliff started off as an eight year old learning how to punt a football from former Rec Director and ball player Hugh Radcliffe. As a result, Cliff went onto win the local PUNT, PASS and KICK competitions in his 9,10,11 and 12-year-old years of competition, can you say dominated? As a 12 year old in Little League Baseball he won the pitching trophy going undefeated 9-0. Then in 1971 Cliff played on the State Recreation Department Baseball Championship Team. All through high school Cliff found a way to be right in the middle of winning teams and that’s because he is a winner. One award that warrants serious recognition is the MVP award in Baseball he got as a Sophomore in High School. Cliff was elected as an underclassman by the players themselves. Just to name a few of those players he beat out were Danny Blizzard, Curtis Fisher and the late Buddy Wells. Folks that is some very heavy company. He was on the All-tournament player when Crisp County played in the big Lem Clark tournament in Macon. In Cliff’s senior year in High School he was the punting average leader for the all-powerful 1-AAA region in Georgia. As a result of his punting proficiency Cliff was offered a scholarship to the University of Pittsburgh. Cliff turned down this offer and went Georgia instead to get a degree. “I often think of that decision and I sometimes have regrets that I didn’t pursue the offer”, “It was just so far away”, Hearn said. Cliffs days at Georgia would be numbered though. His father a local Insurance Agent himself, got sick and passed away. Cliff the ever dutiful son returned home to help and finished his schooling at Georgia Southwestern College. It should be noted that another Cougar football player Larry Felton from Cordele did sign with Pittsburgh and went onto play with Tony Dorsett and win a National Championship in 1976.  Cliffs exploits didn’t end in high school. He would also go on to win the 1989 Club Championship in Golf at Pine Hills in Cordele. He was asked by the late Mike Roobin to come help him coach at Crisp Academy. This decision helped the Wildcats win back to back State Titles in Football in 2001 and 2002. Not to mention his coaching in the youth ranks at CCRD.

“Cliff was a good kid, good athlete and was very knowledgeable about sports.” ”He was a pleasure to coach and we remain good friends even now,” said former Coach Charles Harper. Cliff was for many years a voice of the Cougars on our local radio WMJM. “The thing that gets me is how he beat out an upper classman for the starting 2nd base job as Sophomore”, said longtime friend and former Coach Jimmy Alexander. “Cliff was a tough competitor and winner”. As with most people who play high school sports, former coaches have a lasting impact on our lives. This is obvious when two former Coaches who have been gone from here for 40 to 45 years still keep in contact. Cliff has made a lasting impact on the face of our local sports scene, that goes without debate. Cliff Hearn player, coach, announcer and  ambassador of all local sports is listed in the book of Crisp County as a Great Sportsman and an even more importantly a humble man, a giver of his time and resources. One thing is for sure, the Sports scene in Crisp County would be much different and lacking had there been no Cliff Hearn. A true “Son of Crisp” and a Cougar. SALUTE!!!!!!