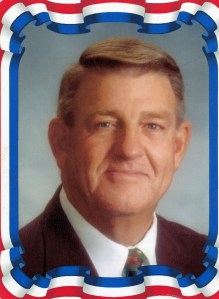 Ferrell Henry passed away Saturday, September 11, 2021 at Crisp Regional Hospital. He was born August 23, 1941 to the late Jeff and Ludie Gray Henry in Colquitt, GA.  As a member of the class of 1959 of Miller County High School, Ferrell was a 3-sport letterman.  He attended Florida State University on a football scholarship where he was a member of the 1959-1962 “Chosen Few” and a member of the SAE fraternity.  He earned his bachelor’s degree in education at FSU and his master’s degree in administration from Valdosta State University.

Ferrell’s career choice was a natural one due to his love for young people and sports.  He influenced thousands of students and parents over his 32-year career span teaching not only athletic skills but most importantly life skills and values as he coached football and taught a variety of classes in Dougherty County, Merritt Island, FL, Glynn Academy (Brunswick), Worth County, and Crisp County.  His people skills and organizational techniques eventually moved him into the administrative arm of education.  He ended his career serving a 10-year term as the Athletic Director of Dougherty County.

Many fond memories from former players have floated around for decades with some of the very favorites being tales from Grave Springs football camp and the Cougar Alley to the 1982 Region Championship.  Some of the words consistently used by his players to describe Coach Henry are honesty, integrity, character, toughness, fairness, and love.  He knew how to motivate each one to reach their highest potential.

Ferrell was the absolute best according to his nieces and nephews.  He was always supportive, encouraging, fun-loving, and loved them each unconditionally in his own special way.  He was known for his bright smile and jovial personality.  He never met a stranger and had a way of making all he encountered feel important.  He had an undeniable zeal for life and could always be found on the sidelines under the Friday night lights, cheering on his beloved Seminoles on game day Saturdays, and fishing the waters of Southwest Georgia trying to find the perfect catch to fry up for friends and family.

In addition to his parents, he was preceded in death by his daughter, Kimberly Lynn (Mimi) Henry, his brother, W.T. Henry, and his in-laws, Leland and Gracie McCann.

There will be a Celebration of Life on Wednesday, September 15th at 4 PM at Crisp County School System Auditorium located at the corner of 24th Avenue and Pecan Street.  A graveside service will be held on Thursday, September 16th at 3 PM at the Colquitt City Cemetery in Colquitt, GA.  Masks are requested for those attending services.  Those desiring may make memorial donations to Cordele First United Methodist Church PO Box 871 Cordele, GA 31015 or to the charity of their choice.