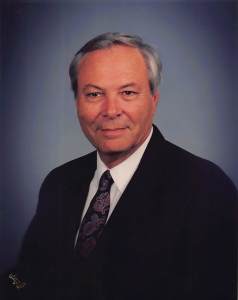 VIENNA: Roy Vernon Noble, Jr., age 83, of Dooly County met his Savior on Saturday, May 14, 2022. Funeral services will be held at 11:00 A.M., Wednesday, May 18, 2022, at the Chapel of Hughes and Wright Funeral Home. Burial will follow at Vienna City Cemetery where the family will greet friends.
Born at his family home on December 6, 1938, Roy, Jr. was the eldest of four children born to Roy and Myrtle Noble. After growing up on the family farm, Roy played football his freshman year at Middle Georgia College then went on to Abraham Baldwin Agricultural College, finishing his last two years at the
University of Georgia. While at UGA, he was involved in many organizations but was most proud of serving as the President of Ag Hill Council representing 19 organizations in the agricultural college. He was also an active member of Pi Kappa Alpha Fraternity enjoying lifelong friendships with many brothers. Upon graduation in 1960 with a BS in Agriculture Economics, he engaged in the family farming operations and Roy V. Noble Gin and Warehouse business in Dooly County. Along with many of his friends, he also served in the Army National Guard. On November 24, 1963, Roy married Ann White of Willacoochee,
Georgia.
A member of Smyrna Baptist Church, Roy became a deacon in 1968 and served his church faithfully for many years. He also served his local community as a member of the Hospital Authority Board for 30 years and chairman for ten. In 1976, he helped start the Bank of Dooly serving on the board of directors and as a longtime chairman. He also served his state after being appointed by Governors Busbee and Miller first to the Georgia Development Authority and later to the Governor’s Science and Technology Advisory Council.
As a cotton ginner, Roy was a member of the Southeastern Cotton Ginners Association serving as president in 1983; the National Cotton Ginners Association Ginner of the Year also in 1983; a member of the National Cotton Ginners Association, President 1987/88; former delegate and member of Board of Directors of the National Cotton Council. He received the Horace Hayden Memorial Trophy for Outstanding Achievement in Cotton Ginning for the State of Georgia in 1983.
In 1989 and again in 1992, Roy was appointed to the Advisory Committee on Universal Cotton Standards under the United States Department of Agriculture. He served on the Board of Directors for Albany Oil Mill and was a founding member
of Chickasha Oil Mill of Georgia. In 1993 he was named Southeastern Ginner of the Year and over the years contributed in numerous ways to the growth and success of the cotton industry.
As a farmer, along with brother and business partner Johnny Noble, they formed Noble Bros Farm raising cattle and growing various crops with a focus on cotton and peanuts. Roy also formed and managed the Mid-South Co-op for several
years.
After retiring, his days were filled with reading, sipping coffee and carrying on with friends, enjoying many bowls of chocolate ice cream, and surveying the countryside on afternoon drives near his home. But what mattered most was being surrounded by his family, and we take comfort in knowing that he is now in that place “Where there will be no setting sun”.
Roy Vernon Noble, Jr. was preceded in death his loving wife of 52 years, Ann White Noble and his parents, Roy V. Noble Sr. and Nina Myrtle Bush Noble. He was also preceded in death by brothers-in-law John White, Gaston Boyette, and Ben Gordy and sisters-in-law Linda White Bruner and Mildred White Boyette.
Roy is survived by his four children, Lori Noble Fortner (Bryon) of Gatlinburg, TN; Jill Noble, Nancy Noble Cotton (Craig) of Vienna; Roy V. Noble III (Jesse) of Perry. Four grandchildren, Abby Fortner, Wes Fortner, Charlotte Noble and Evelyn Noble and two step-grandsons, Chris Cotton (Luci) and Calvin Cotton and step-great grandson, Carter Cotton. He is also survived by his sister, Angela Noble Gordy of Columbus; brother Johnny Noble and wife Beth of Vienna; sister Elaine Noble Johnson and husband Tracy of Vienna, sister-in-law Judy White of
Mobile, AL, brother-in-law, Dale Bruner of Harriman, TN and many nieces and nephews who affectionately knew him as Uncle Bubba.
The family sincerely appreciates all of those from Homestead Hospice who cared for Daddy this last year, especially Charlotte, Sherry and Shay. We would also like to thank Diana Glover and Carol Singletary who provided additional care along with Heartland Hospice and all the amazing nurses and doctors. In lieu of flowers the family requests donations be made to the Georgia Sheriff’s Boys Ranch, 5671 Boys Ranch Road, Hahira, GA 31632 or Samaritan’s Purse at www.samaritanspurse.org

Hughes and Wright Funeral Home is in charge of the arrangements.