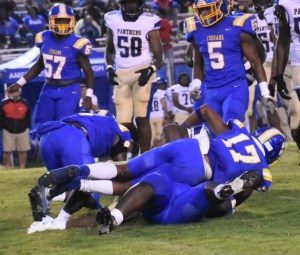 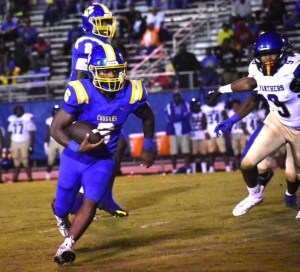 In the “Battle of the Flint”, Friday night in the Den. The Crisp County Cougars extended their win streak to nine straight games over the visiting Sumter Panthers. The final score of 19-0 was not indicative of the game. The Cougar offense continuous to struggle as the Cougars had opportunities galore to add dramatically to the total. Several time the Cougars found themselves with ball deep in Panther territory, one time with a first and goal to go at the 3 yard line and failed to score any points. Realistically the score should have been at least 33-0 but could have been 40-0. The defense for Crisp continues to answer the call when needed and stifled Sumter Counties bid to stop the win streak.

In the early 1st qtr the Cougars got their first break due in part to the most inept punting team I have ever seen. Sumter was not capable of lining up and punting a ball. As a result Crisp got excellent field position. To the Panthers credit they were able to hold Crisp at bay and forced a field goal by David Mitchell of 28 yards. The score was now 3-0. Even though the Cougars had numerous opportunities to score in the second qtr they failed and clung to a 3-0 lead at halftime. In the third qtr Crisp took the opening kick of and drove down and score on a Semaj Chatfield 4 yard run. Mitchell made the PAT and Crisp took a 10-0 lead. After another Sumter turnover the Cougars took advantage this time and Chatfield ran it in from 3 yards out in the early 4th qtr .Crisp kicked off and pinned Sumter deep against their own goal line. At that point Zymarion Hudson came up with a tackle for a loss that resulted in a safety and Crisp went to 19-0. With the win the Cougars move to 3-1 on the season and face Northside of Warner Robins up there on September 23rd. The Cougars are going into a bye week which should give them some time to get their star defensive lineman Amir Dwight well from a knee injury along with a few other nagging injuries on the team .”We are still a work in process on offense and we will get there but our line is young and we have people out of position as a result,” said Head Coach Lawrence Smith. After the Cougars get back and face Northside the heart of the schedule starts as they will enter region competition. Its always great to be a Cougar on Friday night. “how sweet it is”.