CORDELE — A Crisp County Primary School student recently had his dream come true as the man he named his hero made a surprise visit to his class.
Second grader, Ty Walker, and his classmates were learning all about character traits during a guidance class taught by school counselor Becky Forehand.
“We were talking about good character traits, as well as setting and meeting goals,” said Forehand. “Our character trait for August was virtue. When I asked them to name someone who possessed these traits, someone who they considered their hero he chimed up and said Sheriff Billy Hancock.” 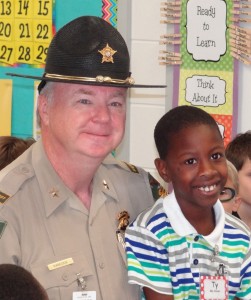 Submitted: Ty Walker was excited to meet “his HERO” Sheriff Billy Hancock, who surprised the youngster at school and talked to his class.Forehand said that Walker was definitely confident of his choice. The young man said Hancock has all the good traits that she was talking about.

Forehand said when Walker described the sheriff he said, “He wants to take care of us and make us safe. He is a good hero.”
Forehand said that even a few days later whenever she asked Walker stuck by his choice, each time proudly proclaiming the sheriff as his hero. She contacted Sheriff Hancock, who was as happy to be dubbed a hero by Walker.
“I am very humbled and honored that Ty considers me his hero,” said Hancock. “As a public servant it is a great reward to be considered a hero, especially by one of the youth of the community.”
In fact, Hancock was so touched by the story that he decided to pay a surprise visit to Walker at the school.
“When Sheriff Hancock walked into the classroom that day you would have thought someone just called Ty’s name to be a contestant on the Price is Right,” said Forehand. “He was so excited. Oftentimes, kids just think that law enforcement are there to arrest someone they love. It’s good for them to have the opportunity to see what our men and women of law enforcement are really about and that is to protect and serve the community. To protect them and keep the community safe for them.”
Forehand said Sheriff Hancock spoke with the students about the importance of making good choices. He also advised them of the “thumbs up, thumbs down rule.” If a child sees an officer and everything is going good they can give them the “thumbs up,” but if things are going bad or they are in need of help they can give the “thumbs down,” and that officer will know to stop and see what help they may need.
“The kids responded to him very well,” said Forehand. “He gave them all pencils. Before he left Ty got to give his hero a big hug.”
As the school day ended, Forehand said students were boarding the buses to head home and she asked Ty what it was like to meet his hero. With a smile that stretched from ear to ear he advised her “It was the best day ever!”
Hancock said he is proud to be Ty’s hero.
“I do not think of myself as a hero,” he said. “Ty has confirmed by belief that being involved with the citizens, can lead to a positive impact within our community.”