Candidates face off during forum 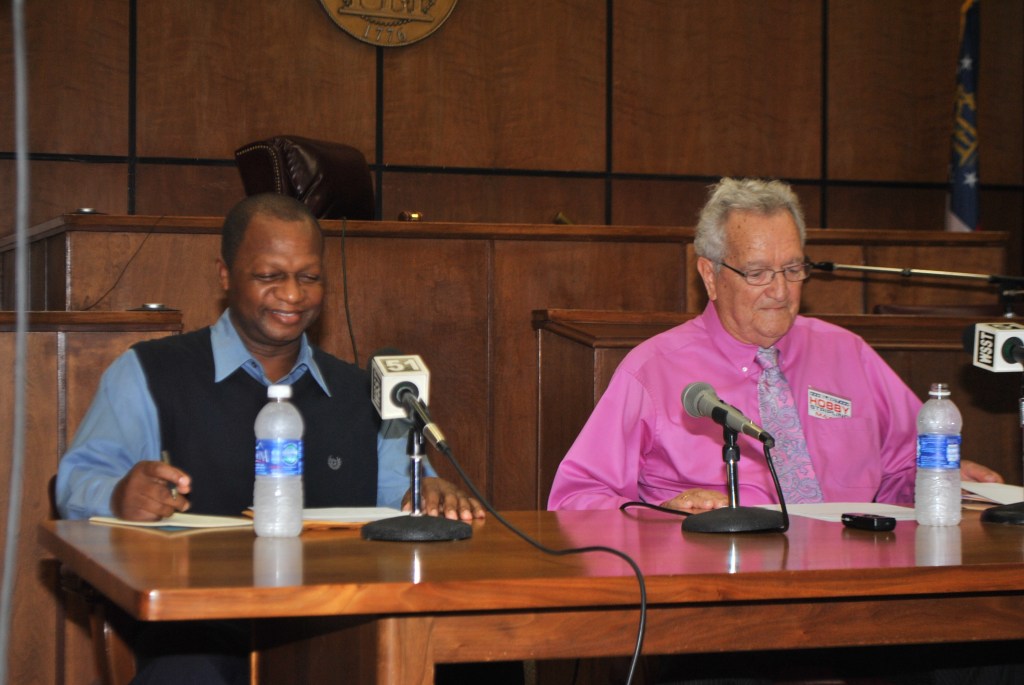 Becky Crissman/Cordele Dispatch Vying for the Mayor’s seat in the City of Vienna is incumbent Eddie Daniels (left) and Hobby Stripling, Sr.

VIENNA — Candidates vying for various positions in Dooly County government faced off during a forum Thursday night.
The event was hosted by the Vienna Woman’s Club and Dooly County Chamber of Commerce and held at the county courthouse at 6 p.m.
The main two match-ups were between candidates in the mayoral races for the county seat of Vienna and Unadilla.
In Vienna, incumbent Eddie Daniels faces a former mayor, Hobby Stripling Sr., who says despite his age and some of the talk about the county, he is fully capable of serving the community as mayor.
“Vienna has been good to me and my family,” said Stripling in his introduction. “I love this city and believe I can give back through my local, state and national contacts.”
Daniels said his experience and training is why he is wanting to continue his service as mayor.
“I began with the city council in 1999 and been serving the people ever since,” he said. “I also have over 200 hours of training from UGA’s Carl Vinson Institute.”
Some of the issued Daniels and Stripling were asked to comment on included projects in the works in the city and one of the biggest was since the police chief’s retirement how they felt about the possibility of contracting with the Dooly County Sheriff’s Office for policing of Vienna.
Daniels said the idea had been looked into but only because “We heard a number we liked,” he said.
Daniels said that money saved could be utilized to help roll back the city’s millage rate and prevent raising taxes.
Stripling said there were both positive aspects and negative aspects to going with a sheriff’s office contract. He said while saving money is always a good thing, the biggest downside would be the city would no longer have any control over the police department.
“It should be approached carefully and a qualified public safety expert should be consulted.”
When asked about city government teaming up with the chamber for their annual trip to Washington both Daniels and Stripling agreed the trip has its good points.
“I think meeting them on our own turf would be just as good,” said Stripling.
Daniels, who has taken the trip in the past said legislators would be welcome “If we could get them down here,” he said.
In regards to the strengths and weaknesses of the city, Daniels said he preferred to look at the positive and not dwell on negatives. Stripling commented that location and climate were among the strengths and lack of adequate housing was a major weakness. If elected he vowed to not accept a salary from the city but to have it placed into a fund to assist elderly and low-income families with utility bills.
Daniels promised to continue working for the people bringing businesses and jobs to the city.
In the Unadilla race it was incumbent Dr. Bobby West versus, Myron Mixon, owner operator of Jack’s Old South and former county commissioner.
Said it is his love for the city, his experience and vast education that should win him the vote of the people while Mixon said it’s his business and political knowledge that should ensure him the votes.
The budgetary challenges facing the city of Unadilla have been at the forefront recently and candidates were asked to discuss their plans to get the city back on track. Mixon brought up the city being in arrears with their payments to the Dooly County Sheriff’s Office for contracted servicing. The payments are 9 months behind. ‘“It’s accounting 101, need to balance the checkbook. You need to check revenues and expenditures. I want to get this city back paying its bills on time.”
Dr. West said it was not one isolated incident that brought the city to its budgetary nightmare but several instances where previous government was over spending. He referenced the ESG contract, the new City Hall,
“The city used to be able to make it on reserves,” said West. He described several projects in the works he would like the opportunity to see come to fruition.
Mixon said he was tired of Unadilla being considered the red-headed step child of the county.
“One of our strengths is the people,” he said. “he’s had four years, give me four.”
Mixon said he would not accept salary that he would use it to buy new Christmas lights for the city. West said the money he receives is used to help citizens pay utilities.
Only one candidate in the Vienna City Council and one in the Unadilla City Council race were present. Susan McNeese, is running against incumbent Henry Johnson in Vienna. Greg Speight, who is seeking to gain his slot back after spending a term off was present. There are a total of six candidates in that election. The three with the greatest number of votes will be elected to the council. 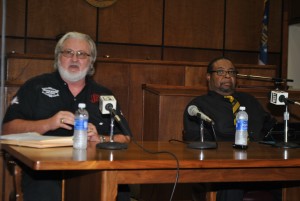