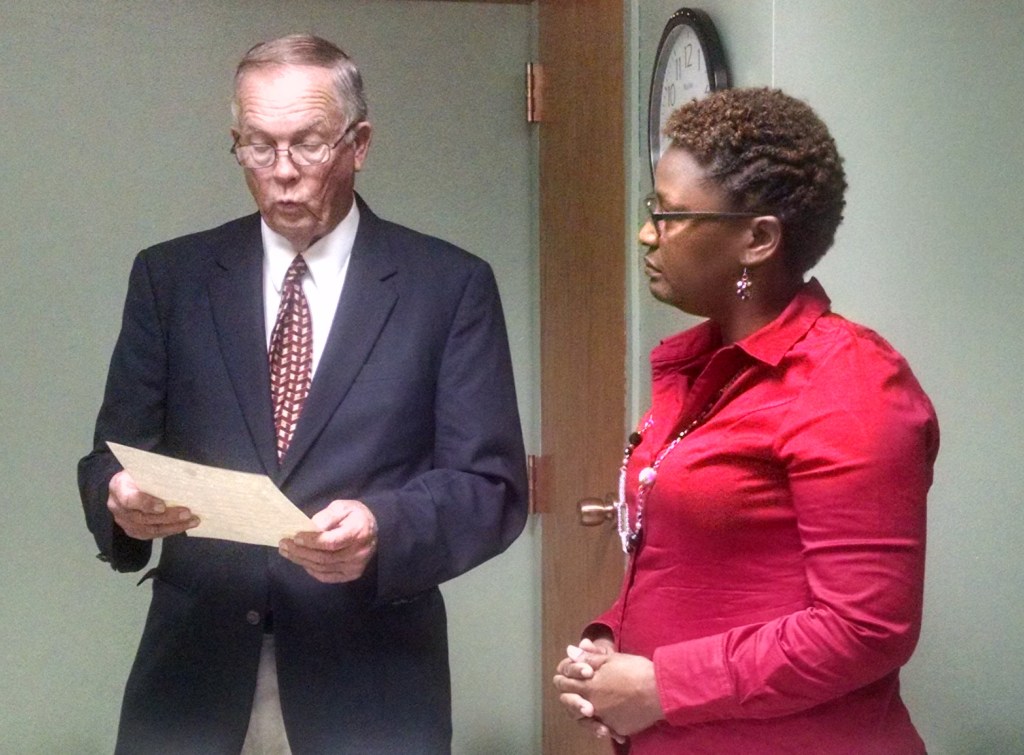 CORDELE — City Commissioners here began their regular meeting Tuesday night by reading a proclamation designating Red Ribbon Week in Cordele.
Commission Chairman Zack Wade read and presented the proclamation to Katrisha Williams who is part of the Red Ribbon Week Committee. October 23 through 31 has been declared Red Ribbon Week in the City of Cordele to promote healthy living and a drug free lifestyle. There will be numerous activities taking place throughout the week. Williams invited commissioners and the public to attend the Red Ribbon Week Community Kickoff which will be held on Friday, October 23 at 9 a.m. at the Crisp County Pre-K.
“I want to thank the city commission and other community leaders for supporting Red Ribbon Week,” said Williams.
Members of the Crisp County Youth Advisory Committee were with Williams and quoted this year’s theme to commissioners “Celebrate Red Ribbon Week, not just for a week but for a lifetime!”
Also on the agenda;
Commissioner Jeanie Bartee advised board members she had been approached by a citizen who lived on Aberdeen Circle who expressed a need for speed limit signs to be posted in that area.
Interim Police Chief Lewis Green informed board members they had received a complaint and that signs had just been placed in the area on Monday.
During his report to the commissioners, City Manager Edward Beach presented several action items for the board’s attention.
First of those was to approve the city’s millage rate and 5-year History of Levy. The board voted unanimously to approve the 10.995 mils rate, the same millage the city has had for the past nine years.
Beach said the tax billing would be processed and notices should go out no later than October 20, 2015 with a due date of December 21, 2015.
Also presented to the board was an application for a Beer Only — Consumed on Premises license submitted by Cascade, located at 2010 Central Avenue Suites G and H. The application was submitted by Beverly Harris and approved by Chief Green on October 1. The board approved the application with Jeanie Bartee being the lone opposition to the motion.
Commissioners also approved an Economic Development Revolving Loan which was suggested by the loan fund committee after their meeting on September 17. The loan application was submitted by Tueisha Tripp Grant for a start-up business. The grant building is located at 102 South 7th Street. The request was for $28,000.
Beach then submitted several action items in regards to the city’s Community Development Block Grant award. The first was for the acceptance and authorization to execute the grant award package. The award is for the Phase II Sewer Rehabilitation in the Gillespie-Selden Revitalization District.
The second item was for the Engineering contract with Lanier Engineering who, in conjunction with J.B. Fairlcoth and Associates submitted the contract for $44,092 to be based on Design, permitting and bidding in the amount of $33,069 and Construction Administration in the amount of $11,023.
The final was for the approval of the CDBG Administrative Services Contract with the River Valley Regional Commission in the amount of $30,000. The board approved all three requests. Commissioner A.J. Rivers abstained from the votes due to the fact that he resides within the district where the project is taking place.
The next meeting of the City Commission is Tuesday, October 20, 2016 at 6:30 pm.