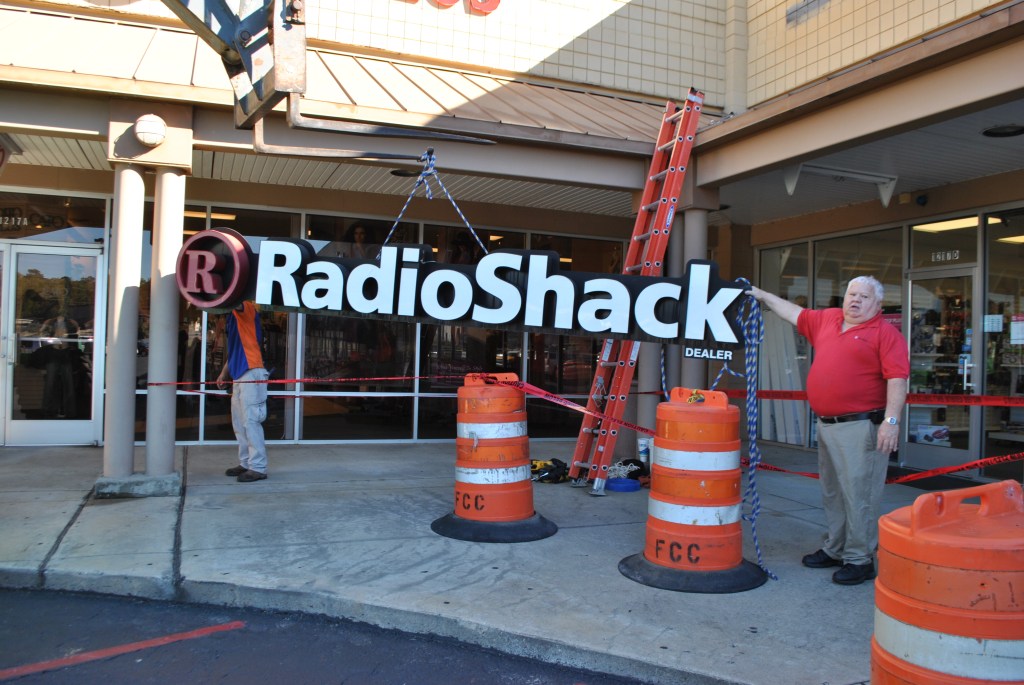 Becky Crissman/Cordele Dispatch Larry Anderson, long-time dealer for Radio Shack says a final goodbye to the last 11 years. Customers should not worry, Anderson says, even though the name is changing he will still be providing the same products and services to his valued customers. 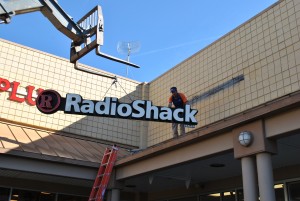 Becky Crissman/Cordele Dispatch Though the sign did not seem to want to let go this employee of Blackshear Signs finally gets it free from the spot it has held for well over a decade.

CORDELE — A long-time fixture of the city came down Thursday, the ending of one era and the beginning of another.
Larry Anderson has been a Radio Shack dealer for over 11 years, the third person to own the dealership in the close to four decades it has been established in Cordele.
“Radio Shack has been a part of this community for at least the last 37 years,” said Anderson. “I think it could actually have been here longer. I have owned the business for the last 11 years.”
Anderson said, unfortunately, Radio Shack filed a Chapter 11 bankruptcy back in February which lead to the closing of 1,720 of approximately 4,500 stores. This included the Cordele dealership. After being sent a contract in July, Anderson made the decision to take over the store on his own which will now be known as Anderson Electronics. He has not been operating as Radio Shack since then but was given till the end of October to remove all signage inside and outside the store. He said even though the process has been tedious he is looking forward to the future and that customers should not worry.
“At Anderson Electronics we will still be offering the services and merchandise,” he said. “A positive for our customers is that we will be able to reduce prices on some things.”
He said once he sells out of merchandise with the “Radio Shack” name those items will no longer be available.
“Instead of getting everything from Radio Shack, I have to go through a multitude of vendors,” he said. “Getting all that straightened out has been my biggest hurdle so far.”
Anderson says his top priority is making sure his customers are taken care of. He says the only thing that is changing is the name. Employees with Lake Blackshear Signs removed the outer sign on Thursday and Anderson says he expects the new sign to be on the building within the next few weeks.
“Be sure to stop in and see us at Anderson Electronics,” he said. “We will still be open the same hours as before. We are ready to move forward and continue to serve the electronic needs of the citizens of Crisp and surrounding counties.