Community leaders get update on port 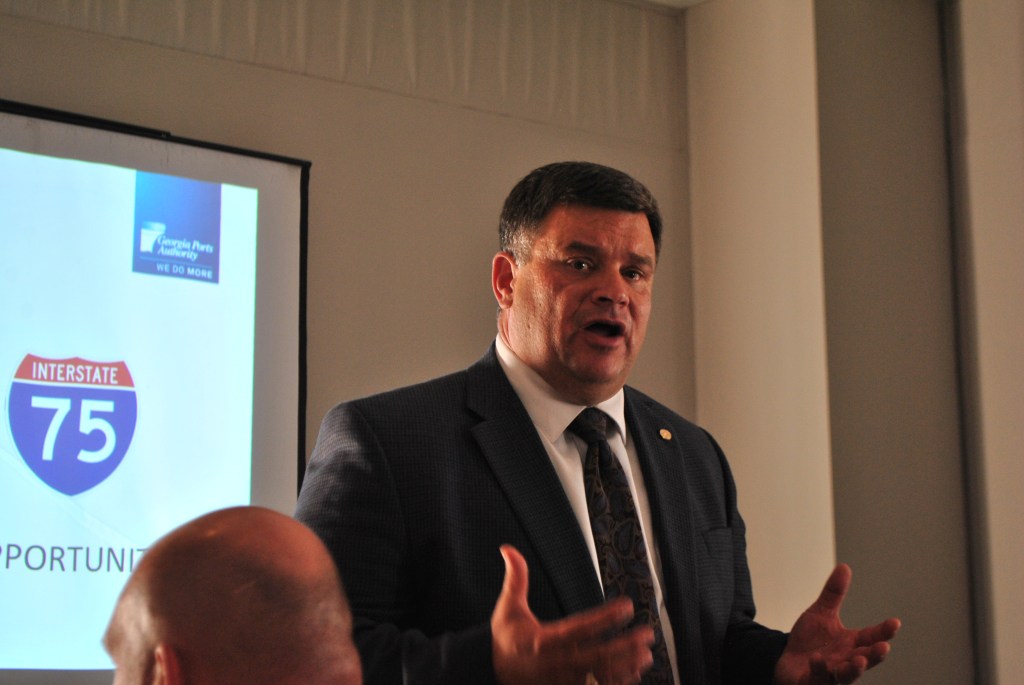 CORDELE — The Crisp County Industrial Development Authority(IDA), Crisp County Power Commission and Cordele Intermodal Services(CIS) welcomed leaders from the Georgia Ports Authority(GPA) in Savannah to Cordele on Wednesday to hear an update on the port.
Community leaders from Crisp, Dooly, Wilcox and surrounding counties met at the Retreat at Lake Blackshear to hear a presentation by John Trent, Senior Director for the GPA, after which they were treated to a low country boil dinner.
According to Trent the Port in Savannah, that did not even make the top 10 list back in the year 2000, is now considered the 4th busiest port in the U.S. and is hailed the fastest growing port in North America. The port has grown by almost 500,000 TEU’s (twenty-foot equivalent units) in the past year.
“The southeast is the fastest growing region in the United States,” said Trent. “It is important to stay ahead of the growth curve.  We strive to keep capacity 20% ahead of demand through long-term planning.”
Trent said the port is continually upgrading, and will spend approximately $140 million next year putting money back in terminals. As for the Savannah expansion project he said construction began on the outside and now big ships will be able to come in.
“Can WE handle 14,000 TEU ships,” he asked the crowd. “Yes we can. There are not many that can do that. Savannah will continue to stay on the radar.”
The Savannah Port offers 37 services around the world. Some of those key features include;
• Savannah is the only port with all G-6 Asian services.
• Offers 12 services via Panama.
• Offers 12 service via the Suez.
• First in = 11; Last out = 13 (all trades).
There were numerous community leaders from not only Crisp County, but Dooly, Wilcox, Lee, Turner, Sumter, Mitchell, and Worth Counties that want to see the area work together and forget county lines. There were also city leaders from Vienna, Americus Ashburn and other areas.
“There is enough horsepower in this room to make something good,” said Dooly County Commission Chairman, Terrell Hudson. “The railroad made this country great and it can be again but one county cannot do it by theirselves.”
Crisp County IDA Director Grant Buckley thanked everyone for attending the event.
“We need to put this region on the map,” he said.
State Representative Buddy Harden also attended the meeting.
“The politics are right,” he said. “CIS is here because we got our people pulling together to get it here.”
Surrounding community leaders seemed eager to get something going for the betterment of the region.

New center wants to be a “Hand of Hope” for…