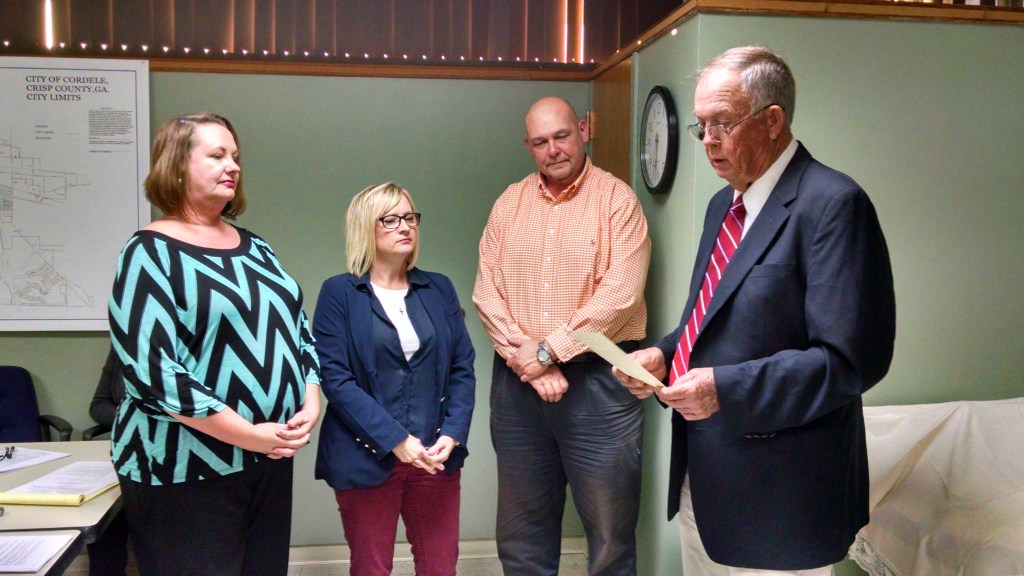 CORDELE — City Commissioners read and signed a proclamation Tuesday evening designating the month of November as Family Connection Community Partnership Month in the city.
The purpose of the proclamation was to acknowledge the efforts of the Crisp County Community Council’s Family Connection Collaborative.
Members of the council stood by Tuesday night as Commission Chairman Zack Wade read the proclamation. The Crisp County Community Council, a Family Connection Collaborative is part of a statewide network of 159 counties that have made a commitment to improving resources for children and families.
The collaborative has focused on improving results by addressing poverty, teen pregnancy, child abuse and neglect, and other symptoms of poverty, and has developed a community-wide strategic plan to guide and monitor the progress made toward improving social skills.
Sherry Evans spoke on behalf of the group and thanked city commissioners for their continued support of the collaborative.
During his action report to commissioners, City Administrator Edward Beach presented several items to the board for their approval.
The first of those items was an application for a Beer Only – Consumed Off Premises submitted by Girishbhai Patel of Stop and Go, located at 2001 U.S. Highway 41 North in the city. Chief Lewis Green had already approved the application on October 12. The board voted to approve the application with Commissioner Jeanee Bartee being the only opposition.
The next item was for the approval of the trickling filter rehabilitation for the Wastewater Treatment Plant. The project involves removing filter media, cleaning the filter, cleaning the media and reinstallation of the media. Beach said the bid was based on a 114 feet diameter and 4 feet deep filter size. The quote presented was from Lanier Contracting Company, who specializes in the type of work to be done, in the amount of $66,987. Beach said that with the board’s approval the project could begin within the next two weeks. The board unanimously approved the bid.
Commissioners were also presented with two separate requests for road closures for events taking place in the city.
The first request was submitted by First Street Church of Christ to close the 700 block of 15th Avenue East for the church’s Harvest of Hope Celebration which will be held on Saturday, October 24 from 3-7 p.m.
The second request was submitted by the Crisp County Primary School for the closure of 24th Avenue from 3rd Street to Greer Street  on Saturday, November 7 from 8:15 a.m. until 9:45 a.m. for the school’s 5K Color Run.
The board approved both requests unanimously.

Thomas the Train returns to Cordele