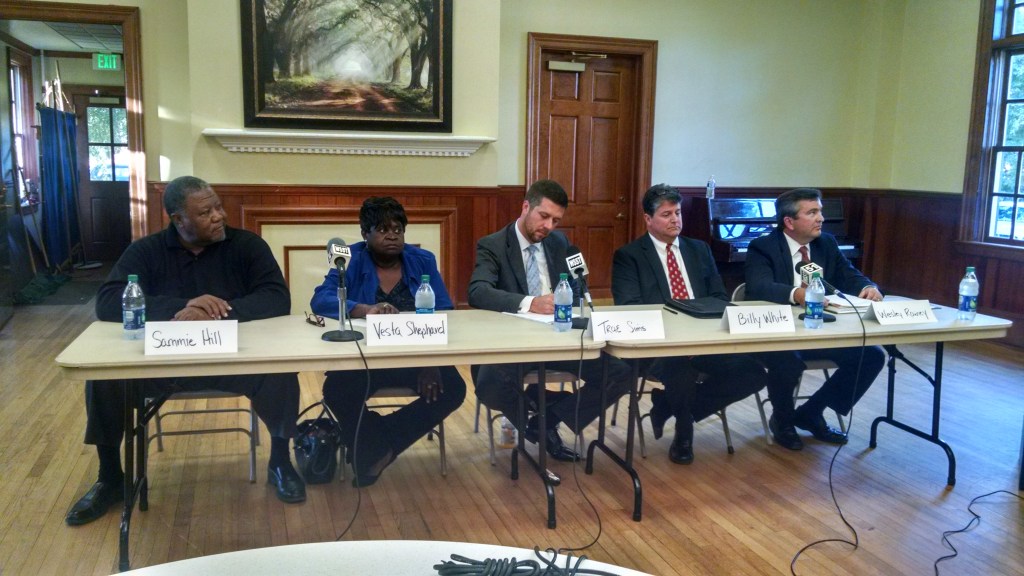 CORDELE — Candidates in the race for two city commission seats participated in a Candidate’s Forum Thursday night sponsored by the Cordele Dispatch. Christine Lewis, General Manager of the Dispatch welcomed citizens and thanked the candidates for participating in the event before introducing moderator for the evening, Carden Summers.
Participating in the forum were candidates for City Commission Seat for Ward 1; Vesta Beal Shephard, and Sammy Hill Sr., and candidates for Ward 4 Seat; Wesley Rainey, Trae Sims, and William (Billy) White. Each candidate was given two minutes to make an opening statement before the question and answer portion of the forum. Candidates were given two minutes to respond to questions about various issues the city faces and how they would respond to those issues if elected.
The candidates shared many concerns such as the city’s crime rate, bringing more jobs and businesses; small, large and even big industry to the community. They also agreed that Cordele is need of a facelift; Work needs to be done to beautify and draw attention and business to downtown, and all areas of the city need improvements including the west side.
Candidates were split on the issue of consolidation of the city and the county. White, Shepard and Hill agreed that the city and county work well together now and seen no reason to consolidate. Sims recalled the matter had been investigated once before, back in 2010. He said while it would be impossible to bring about the change immediately that some overlaps in services would be beneficial such as public works and road services. Wesley Rainey said consolidation that he would like to see the issue looked at further and he believed that it would eliminate some problems; recreation for children, some expenses would be lowered. He said more employees, lower costs.
Before asking candidates how they feel about the Special Local Option Sales Tax, (SPLOST) he reminded them that the tax is NOT a new tax, but a continuation of a 1% sales tax that has been in place for years. If continued the SPLOST funds would be used to build a new middle school and purchase buses for the district among other things. All the candidates in attendance said they are in support of the SPLOST, mainly because it is considered a fair tax everyone pays it including travelers who visit and shop in Cordele. Sims commented that the middle school was getting close to the middle/end of its life cycle. Hill said he supported SPLOST because it takes some of the financial strain off of citizens.
In regards to new and specific opportunities they would like to see in Cordele there was a multitude of responses from the candidates. Sammie Hill says there is a need for new jobs in the city, especially new police officers. Wesley Rainey said their needs to be a concentration on recreation in the community and self play sports parks and batting cages were needed. He said providing better recreation opportunities for young people would help grow the community in a positive way.
Shepard, while she agree in part with Rainey, said that kids weren’t the only ones with no activities to take part in. She said she would like to see something for seniors and adults. She also said there were many empty buildings around the city that could be utilized.
Substandard housing was also among the concerns expressed by the candidates. Trae Sims said he would like to see the owners of homes in such disrepair held responsible by imposing fines or condemning the structures to be torn down.
Shepard said she had spoken with the code enforcement officer for the city and learned that it is important to follow up on those violations once they have been written by the code officer.
Throughout the evening each candidate seemed to reflect on the need for the entire community to work together to make things better, not just for Cordele but for Crisp County. Sims said one way to accomplish this is for all citizens, black and white to come together. He called for an end to the “Us against Them” mentality. He added that as a community we needed to stop dividing our city at the railroad tracks.
Following the Q and A candidates had three minutes for closing.
EDITORIAL NOTE:
ALL candidates for the city commission seats were invited to attend this public forum.
Candidates Roy Dale Jr.(Ward 4) and Machanda Dechelle Davis (Ward 1) declined to participate in the event via a representative from My Brother’s Keeper Cordele, who contacted the Dispatch.
The MBKC representative requested a change of the venue and the right to approve the moderator. NO candidate had any say in the location or moderator for the event.