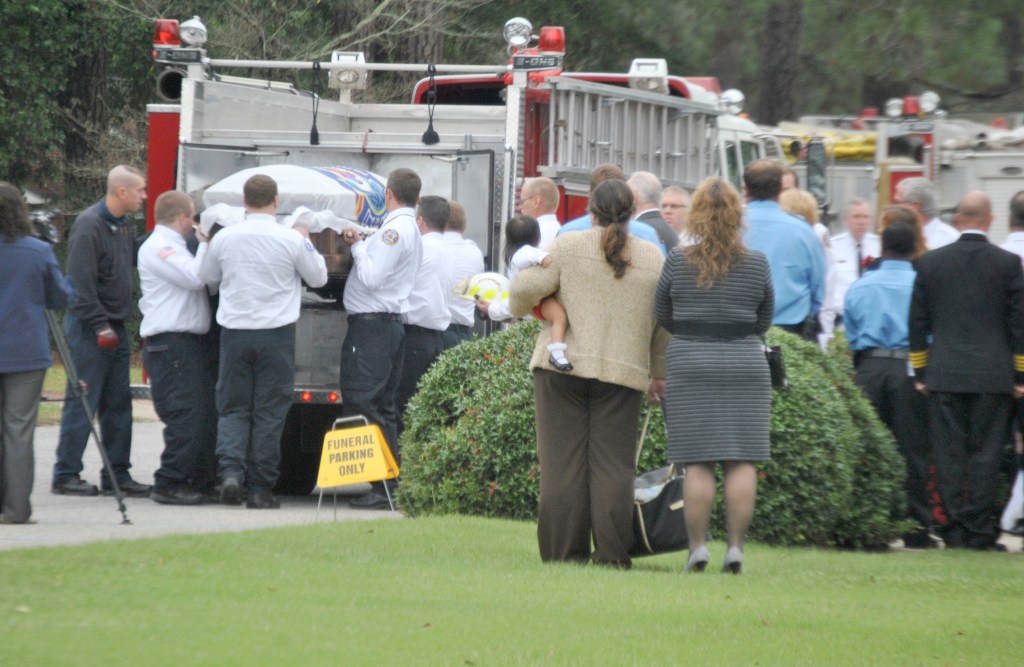 CORDELE —  Tuesday afternoon citizens of our community and leaders from around the state came together here to say a final farewell to Crisp County Fire Chief Ray Lunsford, who passed away Saturday after a long battle with cancer. 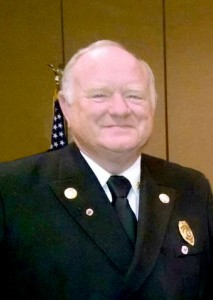 Lunsford devoted 45 years of his life to serving the public, first in his hometown of Albany as an EMT, then as a volunteer fireman. He moved through the ranks for the next 22 years, ending his time in Albany as a Captain in the training division and as the Hazardous Materials Coordinator. He came to Cordele and Crisp County in 1997 as County Fire Chief. Throughout his tenure he received many awards.
He was dedicated to his position in the community and was also a devoted family man, a Christian, and a member of the Cordele Lions Club.
“I knew Ray prior to his coming to Cordele,” said friend, colleague and fellow Lion, Sheriff Billy Hancock. “Our friendship was solidified once he relocated here.”
Hancock described Lunsford as a man always willing to help in any way that he could. Lunsford’s work with the fire department and went hand in hand with Hancock and the local EMA. Hancock said the two worked together often.
“Whenver there was an emergency he was always one of the first ones through the door, always asking What can I do to help,” said Hancock. “Ray, not only led in his profession, but also in his service to the community which was displayed by his hard work and dedication to Lionism.
As a member of the Lions Club, Lunsford as parade chairman for many years. He also assisted with the Junior Watermelon Eating Contest during the annual Watermelon Festival and participated in many other service projects with the Club.
Hancock said the one thing that stood out the most about Lunsford was his strong faith in God. 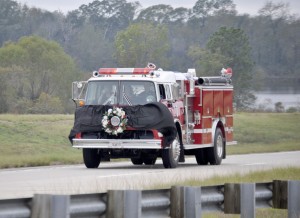 “He was not afraid or ashamed to show his faith or share his faith with others,” said Hancock. “He was truly a man of God and he let that shine through in his every day life.”
Lunsford was a member of Pinecrest Baptist Church in Cordele where he served on the Deacon Board. Despite the responsibilities he held, Ray also worked on the Audio TV Committee and sang with the “Men Of Pinecrest.”
Captain Jonathan Windham of the Crisp County Fire and Rescue described working with Lunsford as the most pleasurable experience he has had in the last 19 years.
“He was an outstanding person, and leader. He was very dedicated to his job, his family, and the Lions Club, and he was very dedicated to God and his faith.”
Windham said Lunsford never minded giving them a little preaching when they needed it.
“The department and this entire community has suffered a great loss,” said Windham. Our thoughts and prayers are with his family during this most difficult time. I know that he has gone home to be with God.”
Lunsford is survived by his wife of 43 years, Kathryn Hobbs Lunsford of Cordele and a former resident of Irwin County;  two daughters and their husbands, Tammy Jean and Wade George of Douglasville and Lisa Kathryn Lunsford and John David Muller of Savannah;  six grandchildren, Kayla, Corin, Kiera, Kenzie, Jadon and Rosie; a sister, Linda Manry of Arlington;  his mother-in-love, Betty Jean Hobbs of Irwin County;  two brothers-in-love and their wives, Wayne and Joy Hobbs and Greg and Susan Hobbs, all of Irwin County; and numerous loving nieces and nephews.
Rainey Family Funeral Services had charge of the arrangements. (Complete obituary on page 2A)