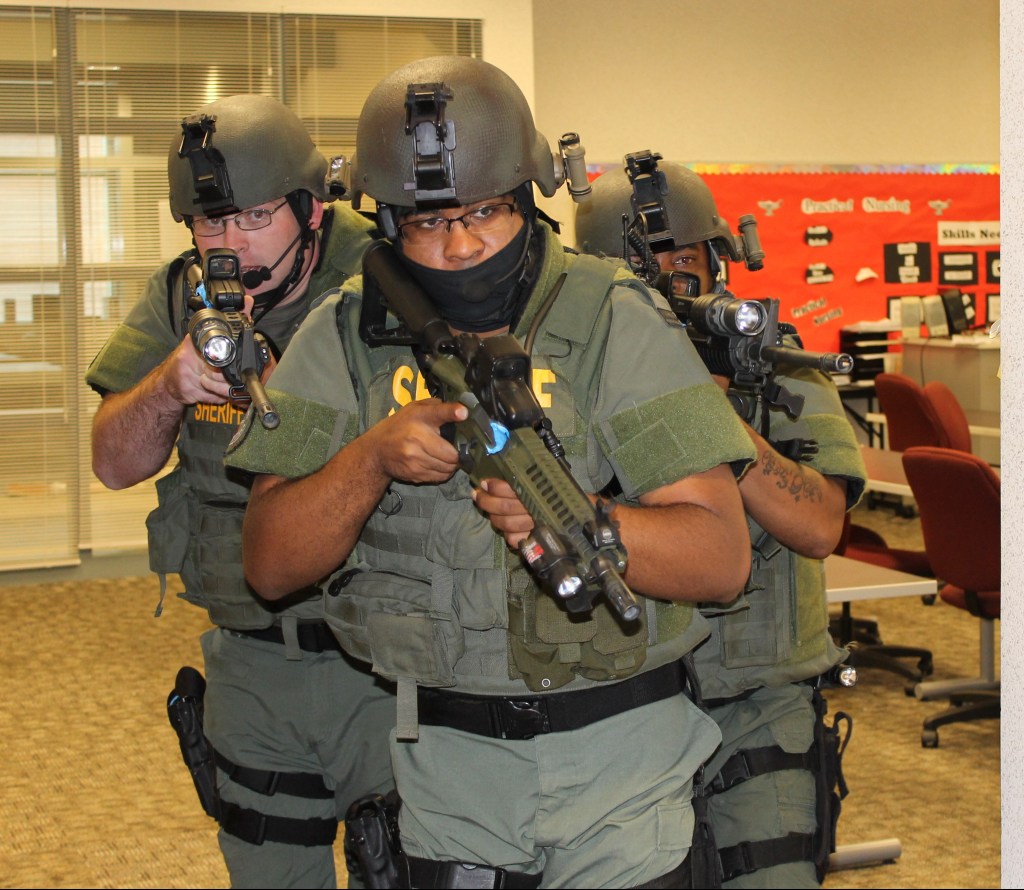 CORDELE — Approximately 50 different individuals from several different law enforcement and emergency management organizations participated in an “active shooter” training drill that staged reenactments of dangerous scenarios on the South Georgia Technical College Crisp County Center campus recently.
“I would like to thank all of the different agencies and individuals who took part in the planning and implementation of this drill,” said South Georgia Technical College Acting President Janice Davis.  “In the world in which we live today, we have to be prepared for a worst case scenario and that is what today has been all about.  We are conducting this drill in the hopes that something like this never happens.” 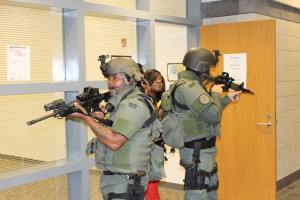 Individuals from the Cordele Police Department, Crisp County Sheriff’s Department, Crisp County Emergency Management Services, E911, Cordele and Crisp County Fire Departments, and South Georgia Technical College officials participated in the exercise.  Several South Georgia Tech criminal justice students also participated in the drill as victims.
Donna Burns, Campus Safety Coordinator for the Technical College System of Georgia, attended the drill and explained that all of the colleges within the Technical College System of Georgia are required to host an “active shooter” training drill to help prepare colleges and communities on how to respond should this type of incident occur.  Burns also met with college administrators to talk about how to handle the aftermath of this type of emergency situation.
Michael Fraser of the Crisp County Sheriff’s Department coordinated the drill for the Crisp County Sheriff’s Department and was the contact for the other local law enforcement and emergency management operations.  Sgt. Jeremy Taylor of the Cordele Police Department was also an integral part of the training sessions.
“South Georgia Tech approached us about assisting with the drill,” said Fraser. “We were happy to help. The school is required to do annual safety drills and with events across the nation involving active shooters we decided to use that scenario.”
Fraser said the scenario for the drill was a disgruntled nursing student came to the school in search of revenge on the teacher that failed her. He said the drill began with a pre-planning at 7 a.m. and role players received their assignments at 7:30 a.m., which was followed by a safety briefing at 8 a.m. At 8:35 the drill began.
“It all began with a 911 call,” said Fraser. “First responders arrived on the scene and the first three responders entered the college and made contact with the security officer who directed them to the area where the shooter was located. A second group of responders entered and the shooter was apprehended in the nursing lab.”
Fraser said they chose a female shooter for the scenario because they wanted people to realize that any type of crime can happen at any time and they need to be alert and aware of their surroundings.
“Most people typically think about an active shooter being a male,” he said. “However, females have been known to be a perpetrator of the crime.”
Fraser said that he too was pleased with the turnout and response for the drill and he believes that all participants learned something from the experience. One aspect he said they really wanted to drive home was to remind the community to be a good witness. 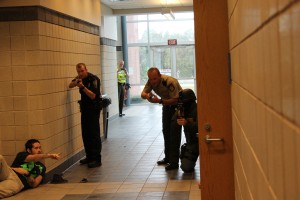 “First and foremost citizens should always maintain safety first,” he said. “Try to take in as much detail as possible so that you can inform law enforcement.”
According to Fraser the Federal Bureau of Investigation is teaching the Run, Hide, Fight in regards to emergency situations. In such a situation it is best to run first, to get away if at all possible. If running away is not possible find a place to hide, be quiet and cut down cell phone volume. As a last resort you fight to get away.
“We want to thank South Georgia Technical College for letting us be a part of this,” said Fraser
“Our area first responders also learned a great deal and they got an opportunity to get inside and familiarize themselves with the school’s layout which would prove beneficial in the event of an emergency.”
South Georgia Technical College Assistant to the President Don Smith and SGTC Campus Safety Director Sammy Stone were the campus coordinators of the exercise and worked with each of the entities to plan the drill.   “The greatest thing to come out of this exercise was the cooperation of all of the individuals that would be involved in the event of a tragedy,” said Smith.  “We had every agency represented and working together to solve a crisis situation and that is tremendous to have that type of support from law enforcement and emergency personnel.”
SGTC Campus Safety Director Sammy Stone also thanked all of the individuals for their support and for participating in the drill.