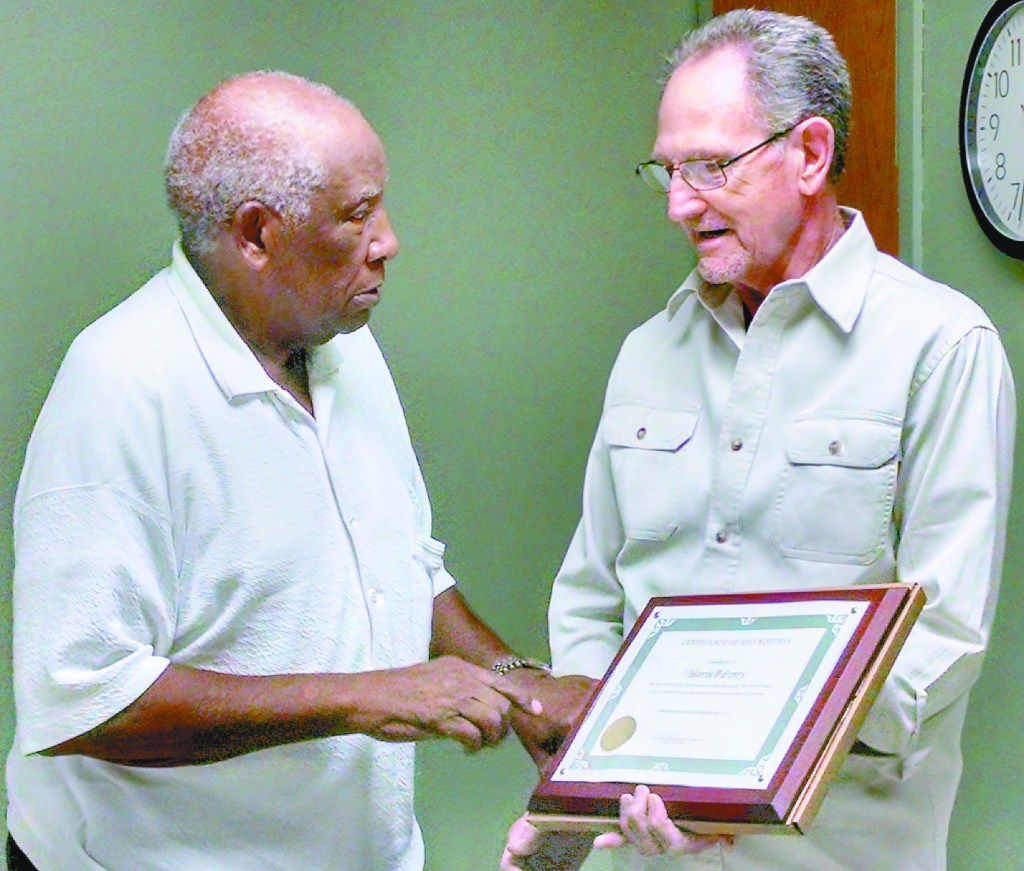 CORDELE — During their meeting Tuesday night, city commissioners recognized citizen Harrell Lee Perry, who will be inducted into the Atlanta Country Music Hall of Fame next week. Perry is receiving the prestigious honor for his “contributions and achievements in the music industry.. He will be honored at the 34th Annual Awards Celebration in Atlanta on Saturday, November 28.
Born and raised right here in Cordele, Perry was the only child of Otis and Daisy Mae Perry. Growing up, he showed an interest in music at a very young age.
Perry thanked the board for the recognition.
Ani Maniklal and Eli Tinsley of the Cordele-Crisp Chamber of Commerce Tourism Committee provided an update to the board about several projects the committee is currently working on.
Maniklal, who serves as the committee’s chairman, thanked the commissioners for giving them the opportunity to speak. The first project he addressed was the refurbishment of the city’s Titan Missile at Exit 101. He informed the board with the polishing and painting completed, they will be moving on to new lighting, landscaping and signage at the site.
He informed commissioners of other projects the tourism committee assists with.
Tinsley said it is important for the community to realize the value of the hospitality industry. It creates jobs; hotels, convenience stores, restaurants, shops, etc. Tinsley said that for a rural town like Cordele, I-75 was a major asset, as well as, Hwy 300, Sam Shortline and other tourist attractions.
“Tourism is Georgia’s number two industry,” he said.
Before finishing their report to the board, City Attorney Tom Cotton asked Maniklal to clarify some confusion that arose during the election in regards to the quiet community project.
Maniklal said the project will entail a section of track on Hwy 280 from Midway Road. Trains traveling the stretch of track will not be allowed to blow their horns.
Manklal said that anywhere from 30-35 trains travel through the city during the night hours and causes a disturbance to visitors staying in local hotels. He advised they wanted to reach a solution that would be satisfactory to everyone.
At the further request of Commissioner Jeanie Bartee, Maniklal also clarified that funding for the Quiet Community Project is being paid by an additional 1% hotel/motel tax and the project is not costing the city a dime. Maniklal also clarified that at no time had any mention of building any type of wall ever been entertained as part of the project.
Also on the agenda:
Commissioners approved several action items presented to them by City Administrator Edward Beach during his report.
The following Alcohol licenses were approved. Commissioner Bartee was only opposition.
• Beer and Wine – Consumed off Premises application, submitted for Hiruba Inc (Flint River Food Mart – 904 East 16th Avenue.) Applicant – Manish Kumar Parel.
•Beer Only Application Consumed on Premises for Cordele Recreation Parlor, 105 11th Ave. West Appicant- Randy James Bridges.
• Distilled Spirits by the Drink, Beer and Wine Consumed on Premises Application submitted by Xin Chen for Hachi Sushi and Japanese Grill, located at 1817 LaPorte Drive.
Commissioners unanimously approved an increase in the fee for background checks for the alcohol licensing from $40 to $45 to reflect increase to the city.
Beach said the increase would go into effect immediately.
Commissioners also approved a request to give city personnel the day after Thanksgiving as a holiday.