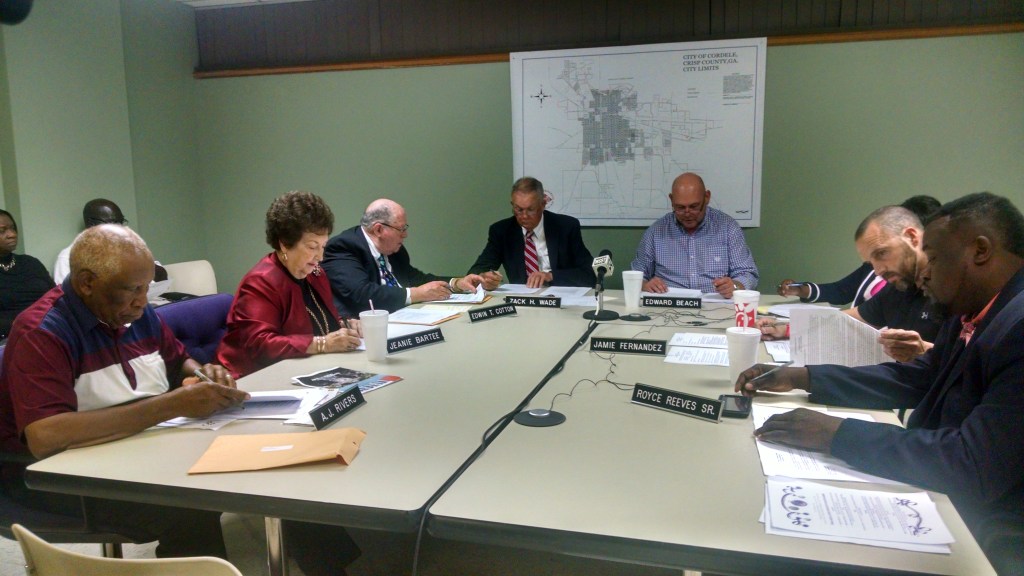 CORDELE — City Commissioners here handled a brief agenda during their regular session Tuesday night. There were only three items on the agenda which required approval by the commission.
City Administrator Edward Beach presented those items to the board during his report. The first was a request from the Cordele Mainstreet to close the 100 block of East 9th Avenue from 4-8 PM on Friday, December 4 for the “Downtown Winter Wonderland” event. The board approved the closure unanimously. The second was another road closure request submitted by the Crisp Area Arts Alliance to close the 700 block of East 17th Avenue for their Merry Movie Night on Saturday, December 5 from 5-7 PM. The board also approved this motion unanimously.
Beach also presented a request for approval of traffic control and safety devices in the 100 block of West 18th Avenue. The request was submitted by McCay Gin. The ginning operation and warehousing are located directly across 18th Avenue West from each other and speeding vehicles have posed an extreme safety hazard when trying to move the ginned cotton from the operation side to warehousing. The board approved the request. Beach said he would have the street department contact the McCay’s Gin and work with them directly on the matter.
Commissioner Jeanie Bartee informed fellowed commissioners that she had been approached recently by a citizen that wanted to commend the actions of a city police officer. According to Bartee the citizen witnessed the officer stop his patrol vehicle and get out to help a young bicycler replace and tighten the chain on his bicycle. Bartee said that there is always so much negative talk that it is refreshing to hear positive comments from citizens. They were unsure who the officer was, but wanted it to be known that local law enforcement steps up to assist those in need.
Beach also informed the board that the 2014 Annual Stormwater Report notified the city on November 18, 2015 that the report for the Municipal Separate Storm Water Sewer System had been reviewed and accepted by the EPD. Beach wanted to thank the city’s water department staff, engineering staff, and Brandon McGirt who is the stormwater technician on staff for their efforts in meeting requirements on EPD on Stormwater compliance.