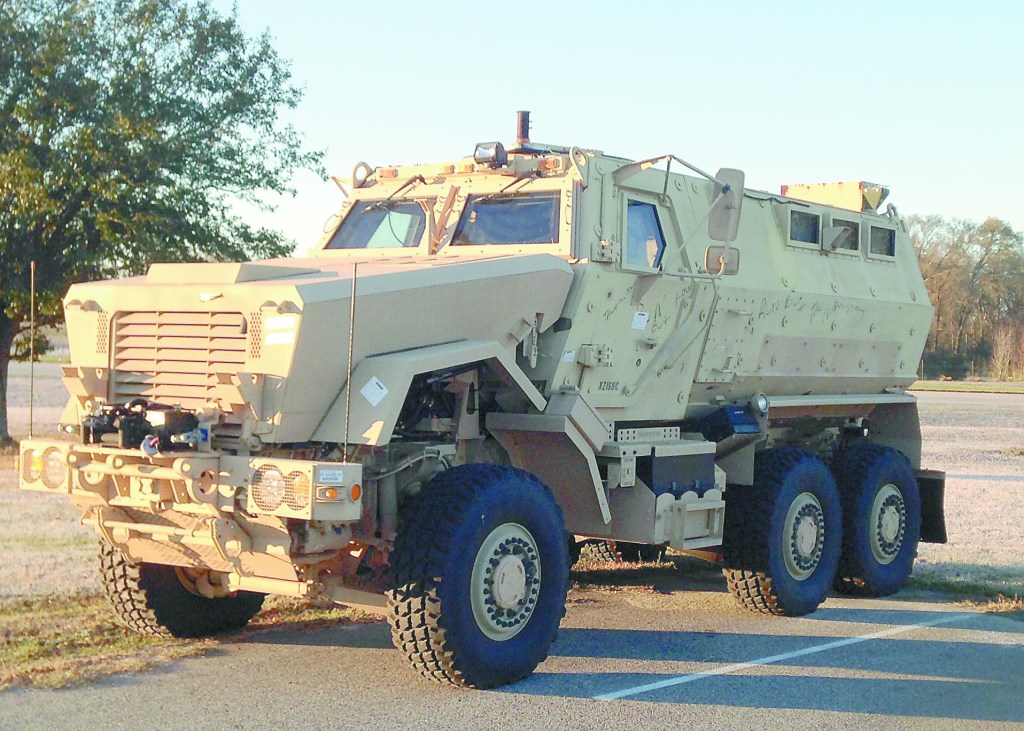 CORDELE — An executive order signed by president Obama in October has led Crisp County Sheriff Billy Hancock giving up a surplus military vehicle that could have been a valuable asset in the event tragedy ever struck the Community.
Sheriff Billy Hancock is quite familiar with the 1033 program. The National Defense Authorization Act allows all law enforcement agencies to acquire property for bona fide law enforcement purposes that assist in their arrest and apprehension mission. Hancock has used the program in the past to obtain equipment otherwise unobtainable in a community our size and with our tax base.
“We have obtained a few hand weapons (45 calibers), night vision equipment, bullet proof vest, and rifles through the program,” said Hancock. “Crisp County partners with two other South Georgia counties bringing the total population serviced by the Interagency Special Response team to approximately 80,000 citizens.”
The MRAP (Mine-Resistant Ambush Protected) would have allowed officers, who are being fired upon with assault rifles and other weapons, to respond to the area and hopefully safely resolve the incident. These incidents could involve retrieving innocent by-standers, wounded citizens or officers from dangerous and volatile situations.  The MRAP was assigned to our Special Response Team and had not been deployed since its delivery to the agency in February of 2014.
“The gun mount was immediately removed and the vehicle would have primarily been for transportation of Deputies into situations where a bullet resistant vehicle would save the lives of officers and citizens,” said Hancock. “We could have kept the vehicle and stayed in compliance with the executive order.”
(The Executive Order 13688 was issued on October 1st and it puts new restrictions on how local agencies can use the equipment’s like mine resistant vehicles known as M-RAPs. Part of the reason for the order was to de-militarize local law enforcement.)
Hancock said after conferring with the Special Response Team commander and the other Sheriff’s in the task force he decided to turn it back in until some of the questions about de-militarizing could be answered.
“I would hate to see the program go away,” he said. “It provides small agencies with access to obtain equipment both large and small that can readily help agencies protect the citizens they are sworn serve. It is equipment that has already been purchased with taxpayer money and if not put to use, it goes to waste.” Hancock understands that agency heads should be both discerning and realistic when obtaining equipment.  Agencies should purchase equipment that is relevant to their jurisdiction. Hancock further states that policies and guidelines on how and when said equipment is used should be implemented and Crisp County has such policies in place.