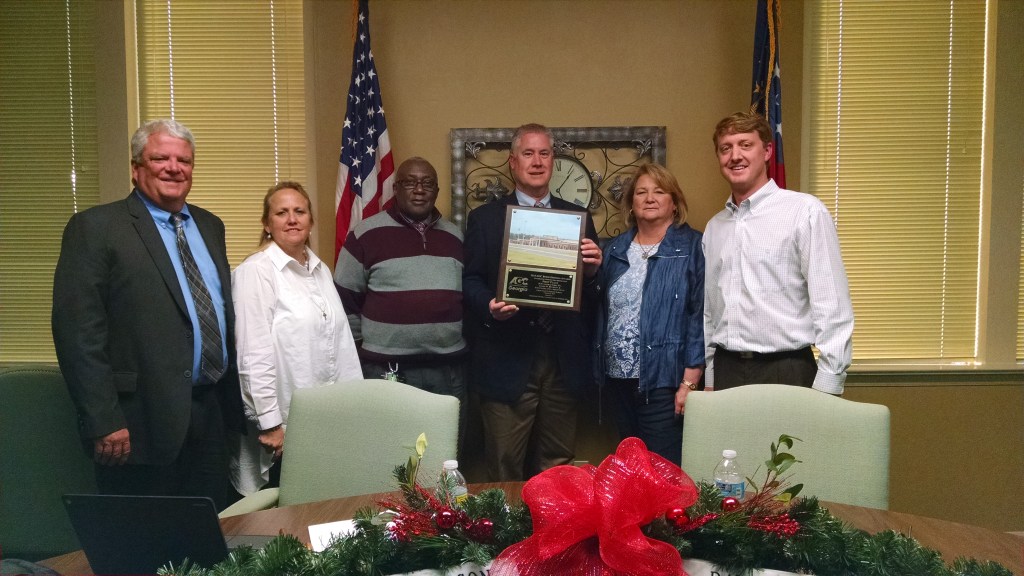 CORDELE — During their regular meeting held Tuesday, the Crisp County Board of Education was presented a plaque in recognition of the Crisp County Primary School.
Jack Loyd, vice president of JCI Contractors of Moultrie presented the award to the board, acknowledging that the school received not one, but two ACG Build Georgia Awards: 1st place in Construction Group and 1st place in Best Sustainable Practices.
“We have built a lot of schools,” said Loyd. “But the Crisp County Primary School really sets the bar high for other schools. When you walk into the school, the look, the feel. There is so much architectural detail. This is our masterpiece.”
JCI Contractors handled the construction of the school which was designed by James F. Buckley. Loyd said that they did not just build a school here, they built a lot of relationships with the people they worked with throughout the project. He congratulated Crisp County on the success of the school.
According to Loyd, only a few of the awards received on behalf of the school are presented in the state.
Also on the agenda;
Board members approved a consent agenda which included to requests for overnight field trips
Jim Steel requested permission for the Skills USA team to attend the state Skills USA Leadership and Competition in College Park on March 17-18 2016. The board unanimously which was approved.
Allison Odom requested permission for students to attend the CTI State Officer Winter Leadership Training in Covington, January 8-9, 2016. This also was approved..
Board members also approved a resolution for the SPLOST V which was approved during the recent election in November.
Dates to remember
• December 18 – Early Release
• December 21-January 1 – Christmas Holidays and New Year Holiday.
• January 4 – Teacher planning, student holiday.
• January 5 – Students return to school.
• January 7 – BOE Work Session.