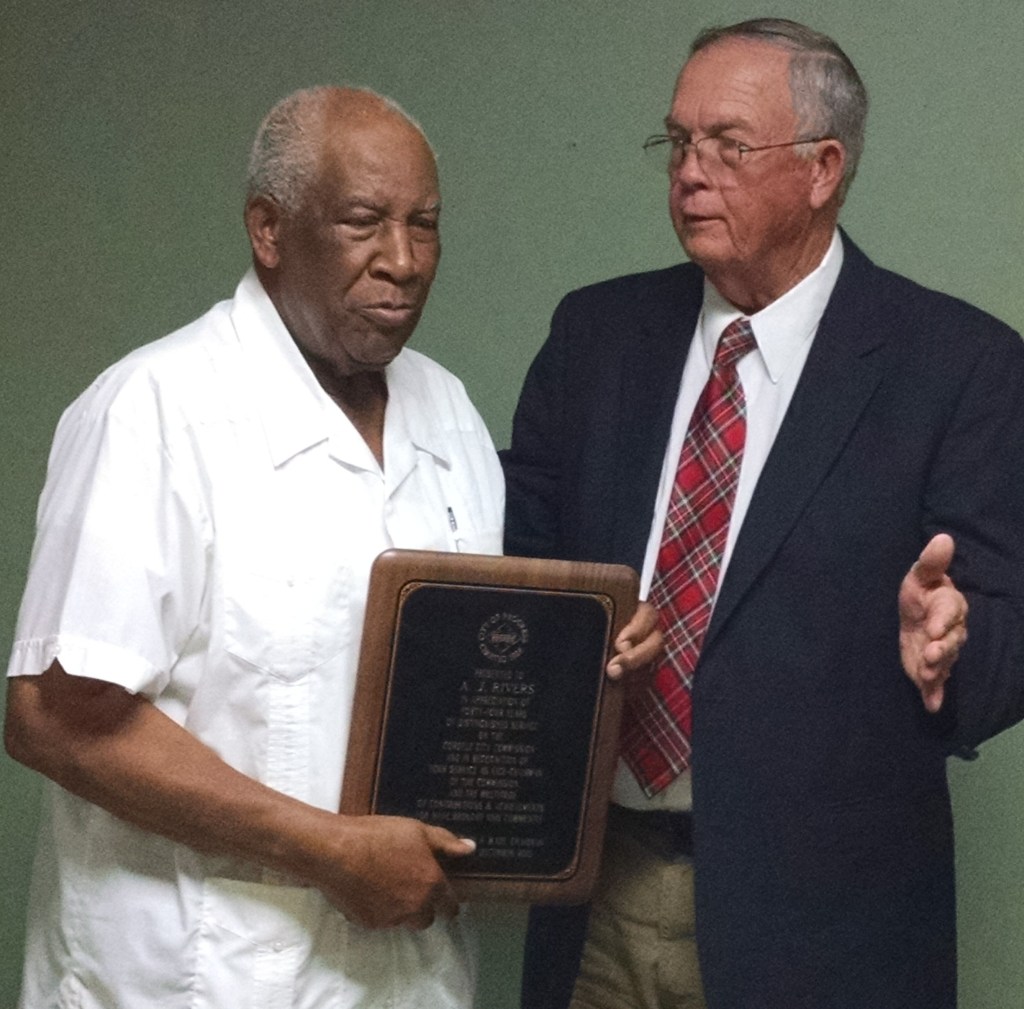 Becky Crissman/Cordele Dispatch In honor of his final meeting after 37 years of serving on the Cordele City Commission A.J. Rivers was presented a plaque by Chairman Zack Wade.

CORDELE — Tuesday night city commissioners held their final meeting of the 2015. In honor of his final meeting of 37 years of service, the board presented retiring member A.J. Rivers with a plaque. He received a standing ovation from board members and other community leaders and citizens who attended the meeting.
“It is going to take me some time to get used to being retired,” he said. “I am sure I will have a honey-do-list to keep me busy.”
Rivers said he was humbled by the ovation he received from the group.
“I appreciate you allowing me to serve the citizens of Cordele for all these years,” he said. “Remember one can’t do it by themselves. It takes everyone working together.”
Citizen Charles Kerr was on the agenda to address commissioners. He brought up several concerns to the board including the current state of the city’s west side and the need for improvements in that area. He also said he felt the area was not receiving adequate police services and that they should have more police presence in that area because people are just running around doing what they want.
Kerr also mentioned substandard housing and dilapidated houses that needed to be torn down. He also questioned commissioners regarding reports given by department heads and that he wanted to see details of those reports. Those reports are a matter of public record and can be made available. Kerr also said he would like the city to become involved in the recreation department, stating it should be a collaboration between the county and the city. In closing the thanked commissioners for allowing him to speak.
Probably the biggest action item on the board’s agenda was the funding of the tourism committee from the Cordele-Crisp Chamber of Commerce.Commissioners were divided on the decision to table the funding of the Tourism Committee to conduct a study through an outside agency on what could possibly be more effective tourism practices.
This will take away over $220,000 per year from the chamber. They currently have around $400,000 in the bank which is only spent at the discretion of the tourism board.
Beach commented that the city just wanted to make every effort to ensure they maximize their money for tourism.
Commissioners Jeanee Bartee and Jamie Fernandez voted to table the decision while commissioners A.J. Rivers and Royce Reeves, Sr. were in favor of funding the chamber.
“If it ain’t broke don’t fix it,” said Reeves.
Chairman Zack Wade had to break the tie and voted with Bartee and Fernandez to table the decision until the outside group comes in to evaluate.
Commissioners also approved a Beer Only Consumed on Premises license for Champions Sports Bar and More.