Area under flood watch until Friday 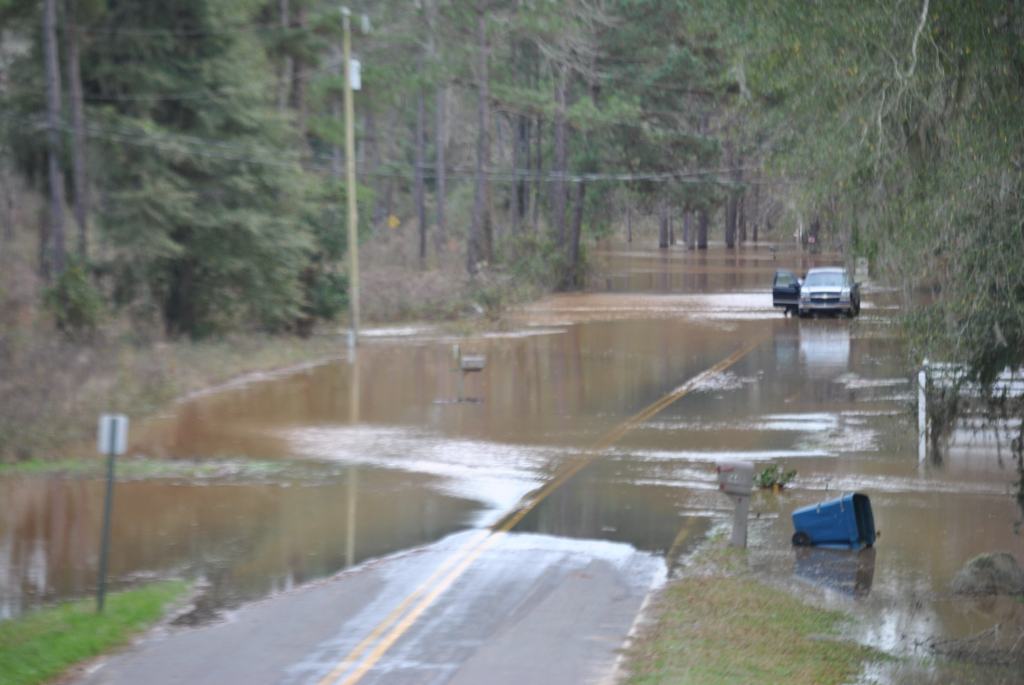 Becky Crissman/Cordele Dispatch Photo taken on top of the Hwy 27 Bridge in the area of Drayton Loop.

CORDELE — Though Lake Blackshear was reported Tuesday to have leveled off, Crisp and surrounding counties remain in a flood watch until Friday. 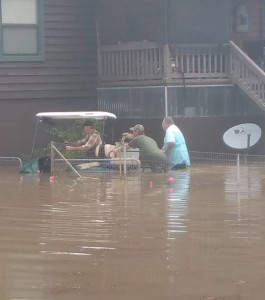 This photo was taken from the facebook page of Carrie White Lang and shows residents in an evacuated area assisted a fellow resident.

“No significant rise is anticipated in the next few hours,” said Sheriff Billy Hancock in a phone interview Tuesday evening.
The Crisp County Power Commission has worked diligently with members of Crisp County Public Safety since Christmas when the flooding first began. Hancock said it was the work of the Crisp County Power Commission General Manager Steve Rentfrow and his staff that really made the difference.
“They did a great job managing the water and preparing the lake and Steve’s calculations being correct were important in preserving the property of the people that live around the lake. The lake has been monitored around the clock since this all began.”
In Dooly County, where Turkey Creek is adjacent to the Flint River there were some evacuations such as in the Drayton Loop area. That is believed to be the only evacuations in the tri-county area.
Hancock said although more rain is expected in the next few days they do not believe it will have a large impact on what is going on right now.
“If we have 8-10 inches of rain north of us it will have an impact,” he said. “The next couple of days if we have 1-3 inches what we may see is local flooding such as roads and culverts because of the previous amount of rainfall we have had.”
Lake Blackshear came up to its highest level at 237 feet. which is said to be considered pool.
The following press release was given by the Crisp County Power Commission Tuesday:
“The Flint River at the Montezuma gage site reached its crest at 22.56 feet and is declining very slowly. At 10:00 AM the level at Montezuma was 21.4 feet. The River Level at the Highway 27 Bridge has stabilized but has not yet begun to decline. At 10:00AM the lake level at the Blackshear Dam was 236.01msl, just under one foot below normal pool. The level just north of the 280 Bridge was about ½ foot above normal pool and the level in the vicinity of Joe’s Island was approximately 1½ feet above normal pool. Localized flooding continues in the very northern end of the lake South of the Highway 27 Bridge. The Lake is continuing to rise at a rate of about 1½ feet per day at this time. We do expect the crest to pass through the main body of the Lake this afternoon and Lake Levels should stabilize at that point. 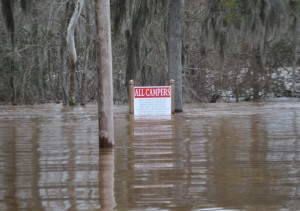 Becky Crissman/Cordele Dispatch
Photo taken at the Power Dam in Warwick. A place known for camping a sign is almost completely submersed in water.

All of the floodgates at the Lake Blackshear dam are open at this time with the Lake Level still rising. We anticipate beginning to close gates sometime this afternoon as the Crest passes through the Lake.
Commission staff will continue to monitor the situation and make periodic updates.
Residents are urged to use caution around waters, which will be flowing swifter than normal.
For further information you can contact the Crisp County Power Commission at (229) 273-3811