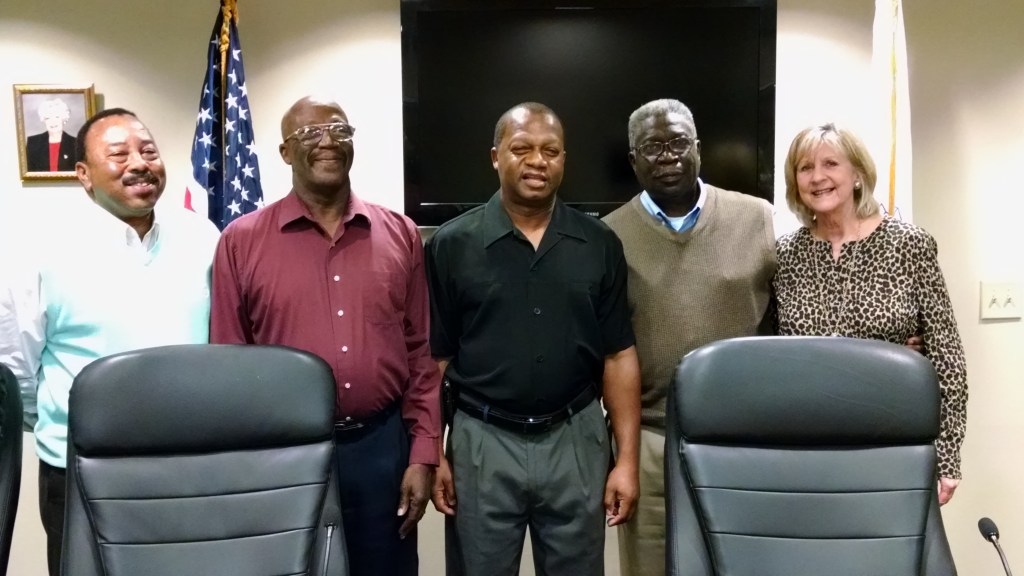 CORDELE — It was an emotional end to Vienna Council’s last meeting of 2015 as members said goodbye to two of their own; Mayor Eddie Daniels and Councilman Henry Johnson.
“It has been my pleasure to serve with people of your caliber,” said Daniels in reference to his fellow board members. “I swore under oath I would serve Vienna to the best of my ability. May God continue to bless this city in the future.”
Daniels has served with the Vienna City Council for the past 15 years. He began as a council member and in later years was appointed by his peers to serve as the council’s Mayor Pro Tem under former mayor Emerson Lundy.
He later vacated that seat on the city council to run for mayor.
“We will miss you,” said City CLerk/Accountant Debra Spring.
Council member Walter Brown said of Daniels, “I am proud of the job you have done for the city of Vienna. As mayor you have gone above and beyond the call. You have gone to Washington, Savannah, Atlanta, and anywhere else you could to try and bring more jobs to the city. You have always taken care of the business of the city first, sometimes even leaving your own job to do so. I appreciate you and hope that God continues to bless you in the future.”
Mayor Pro Tem Beth English echoed Brown’s sentiments. Both English and Brown have served the longest with Daniels.
“I just want to say that it has been a pleasure and a privilege to work with you as both a council member, mayor pro tem and mayor. It has been an honor to serve these last 15 years with you. We have formed a friendship through the years that I have come to value and treasure very much. I believe that when one door closes, God opens up another one. I know that God has big plans for you.”
City Attorney Verlin Jones also commended Daniels on his service. He said though the two did not always see eye to eye on matters, Daniels always used discretion and it never showed publicly.
“I also appreciate the way you helped make this city a more open environment, such as opening office hours on Saturday. You always made yourself available, even if I had to meet you in the Home Depot parking lot.”
Councilman Randall Almond also said it was a pleasure to work with Daniels since he came to the board.
During the meeting;
• Council members approved a correction to the Engineering Firm in the contract for the Community Development Block Grant FY 2015.
• City Administrator Michael Bowens gave his report to the board.

Area under flood watch until Friday