Poem to children turns into published work for Vienna man 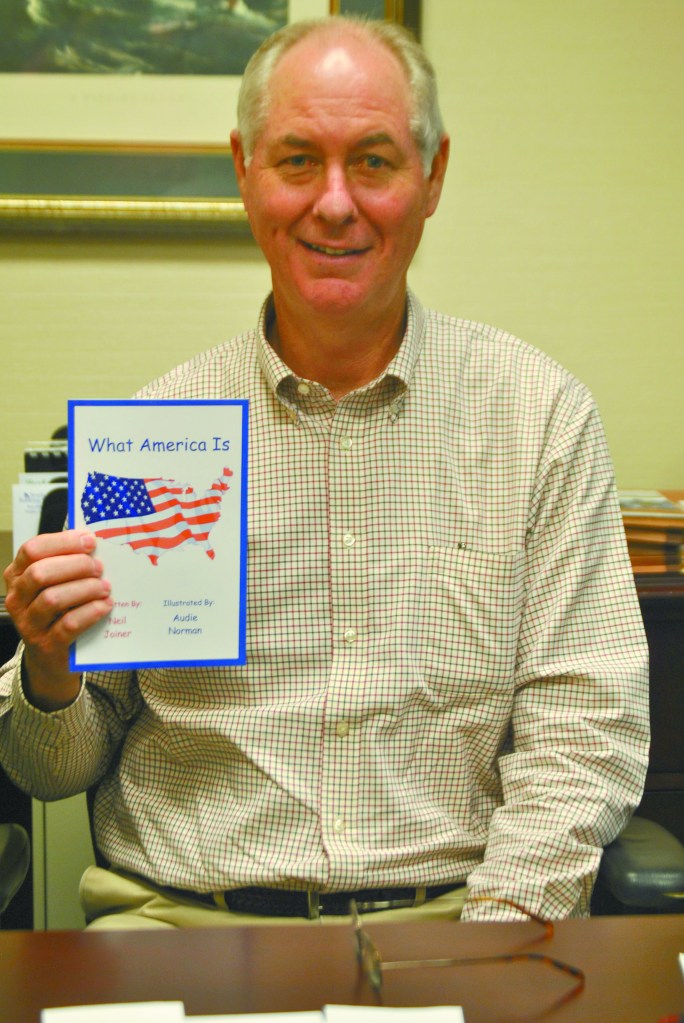 VIENNA — What started out as an entry in a poetry contest 31 years ago has turned into a published work for retired banker Neil Joiner.
In 1984 Joiner decided to enter a Patriotic Poetry Contest sponsored by the Vienna Junior Woman’s Club, known today as the Vienna Woman’s Club.
“My wife Jane and I have triplets; Erin, Seth and Carrie,” he said. “At the time of the contest they were about 5 years old. I began to think how would you explain to a child, “What is America?” That is how I got the idea for the poem.”
In honor of the 89th birthday of his mother, Margaret Hill Joiner, he decided to have the poem published in a book for children with illustrations. He dedicates the book to her saying
“She continues to be a fountain of encouragement, overflowing with faith in what God can do through each of us. She has always given me credit for being more talented than I really am, but that’s what mothers do.”
Joiner also published the book as part of an effort to raise some funds for the Flint Humane Society, a no-kill shelter for abandoned or abused animals. Books are $10 each and $5 from every sale goes directly to the FHS for supplies necessary to maintain the shelter.
“Buy a book, fee a puppy,” said Joiner. “It is a very worthy cause. The Flint Humane Society operates on a very small budget. They work wonders with that tiny budget but they can use all the help they can get.”
Joiner says he hopes the book will generate some support for the FHS, not just through buying his book, but by people simply donating.
Joiner, has worked for the last 35 years in banking. The first 33 years with the Bank of Dooly. During his time he worked his way up to President of the bank. Bank of Dooly was later sold to South Georgia Banking where he has served the last few years of his career. His official last day was December 31, New Year’s Eve.
“I wanted to start the New Year off in a new direction,” he said. “I am sure I will have a honey do list to begin, but at age 63 I am in good health and it is time for a change of pace.”
You can pick up a copy of Joiner’s Book “What America Is” is a colorful description of America and was illustrated by artist Audie Norman. They are available for $10 each at the South Georgia Banking Company or the Dooly County Chamber of Comerce.