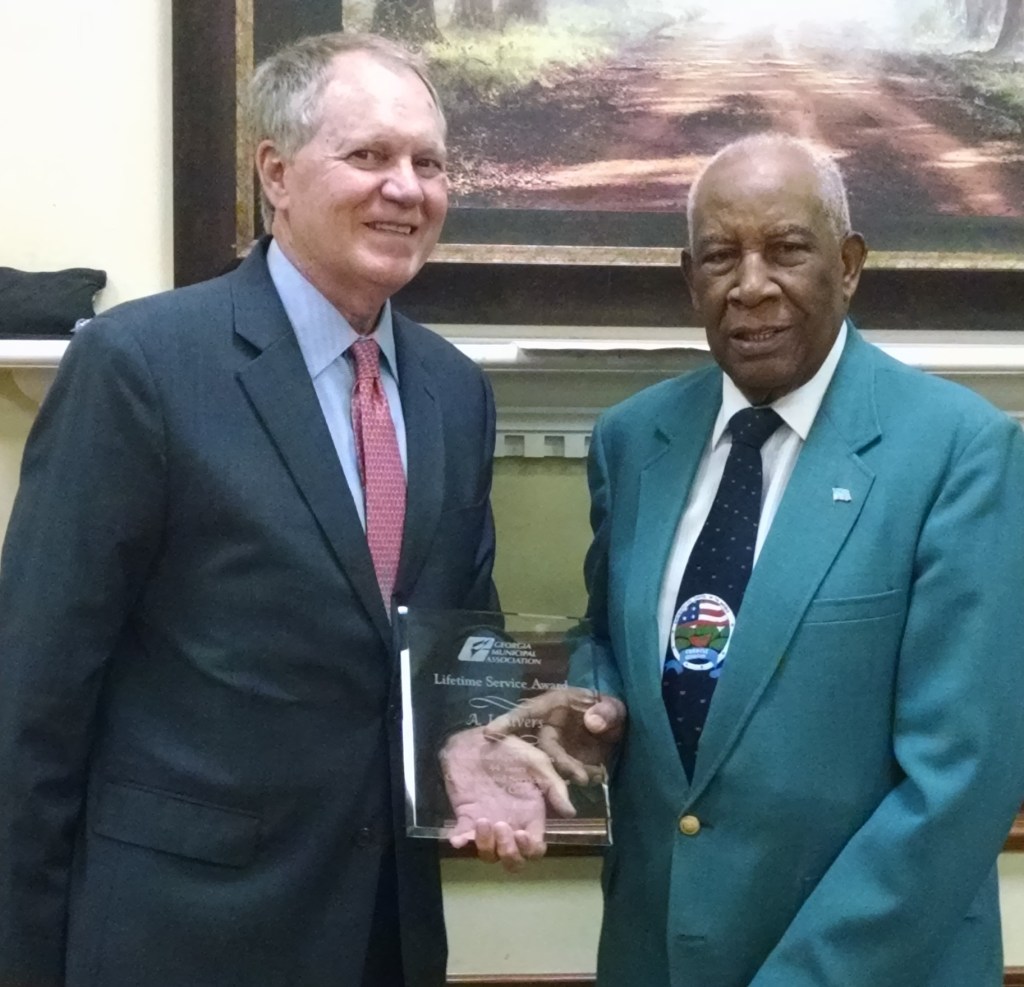 GMA Executive Director, presents Rivers with the Lifetime Achievement Award from the GMA.

CORDELE — Family, friends and colleagues turned out in numbers to honor retired City Commissioner A.J. Rivers after more than four decades of service to the city. A reception was held Thursday evening at the Cordele Community Clubhouse with Rivers as the guest of honor. 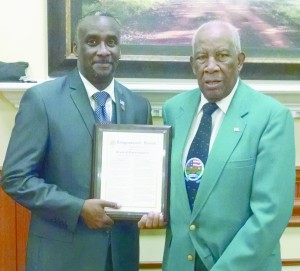 Rivers accepts an award from Kenneth Cutts on behalf of Congressman Sanford Bishop.

City Administrator Edward Beach welcomed those in attendance at the reception. Fellow commissioner and friend of Rivers, Chairman Zack Wade described Rivers as a man “with plenty of intellect.”
“We still plan to use him when we can,” said Wade. “This is a bad day for me. We have always been the best of friends and I appreciate him more than he will ever know.”
Beach then introduced Lamar Norton, executive director of the Georgia Municipal Association who had a special presentation for Rivers.
“A.J. has demonstrated his love of his town through his many years of generous service to its citizens,” said GMA Executive Director Lamar Norton. “Cordele is fortunate to have that kind of dedicated leadership, and GMA and Georgia’s cities are also grateful to have seen the example he set for all city leaders.”
Norton said that people who devote their lifetime to serving their community stick with and get things done, often putting their own endeavors and even their families aside during their service.
“He has served on the GMA Board of Directors, he has served as a district officer and in other capacities. He has always been a willing servant and a dear friend.”
In honor of his dedication and service Norton presented Rivers with the GMA Lifetime Achievement Award.
“As the first African American to be elected to a city office in Cordele he has served with dignity and class above reproach. He is an example for all leaders across this state to follow,” he said.
Kenneth Cutts, district director for U.S. Congressman Sanford Bishop also presented Rivers with an award on behalf of the congressman who was in Washington and could not attend the event.
“We are here today to honor a great man,” said Cutts of Rivers. “Congressman Bishop has bestowed the highest honor that a congressman can give an individual. Today, he introduced a statement before Congress.”
Cutts read part of that statement.
“Rivers has served his nation with honor and distinction in World War II,” he said. “He has dedicated his life, always a mentor. He possesses the rare quality of humble leadership.”
After the thunderous applause of a standing ovation, Rivers addressed the crowd. He asked his wife of 67 years, Vera, to join him as he spoke.
“If I could I would saw these in half to give her part,” he said. “If I have been successful it is because of the support she has given. You know they say behind every successful many is a strong woman.”
Rivers had some advice to give new commissioners.
“It is a team effort,” he said. “One is not a majority. If Cordele is gonna survive we have to work together. I may have been elected to Ward 1 but I was not a Ward Commissioner. I was a City Commissioner and did my best to serve all the people.”
Refreshments were served following a blessing by Rivers’ successor Vesta Beal Shephard. Attendees had the opportunity to congratulate and give well wishes to Rivers for his achievement.

Poem to children turns into published work for Vienna…