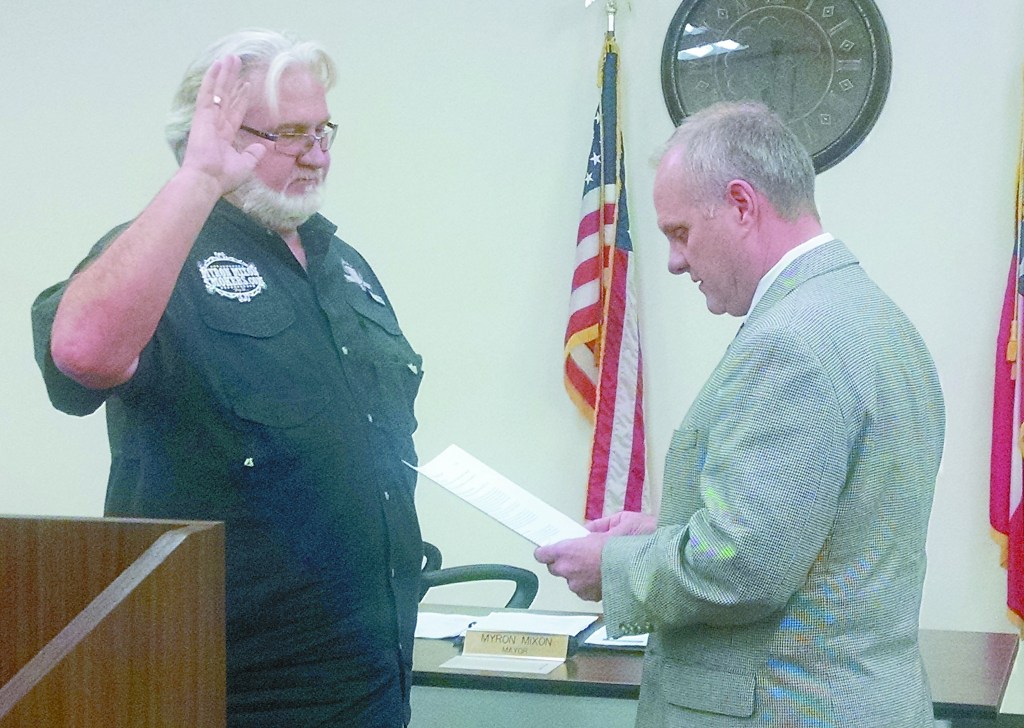 UNADILLA — Tensions ran a little high at the City Council’s first meeting of 2016. The evening got off to a good start with the swearing in of the new mayor, Myron Mixon.
A long time resident of the city Mixon is best known as the patriarch of Jack’s Old South and a judge on BBQ Pitmasters. Also sworn in were three council members; Chester Thomas who was re-elected to a second term, Newcomer Tyrone Adkinson, and Dexter Whitaker who after sitting out one term was elected to serve again. 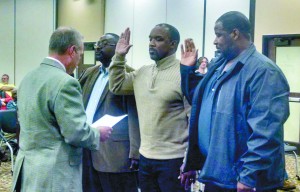 “This is your A-Team right here,” said Mayor Mixon as he officially called the meeting to order. “Our job is to work hard for you and make you proud of your city.”
Mayor and council then entered into a brief executive session to discuss personnel matters. After reconvening in regular session the board heard reports from the various department heads.
Dooly County Sheriff Craig Peavy did not have anything to report. Fire Department Chief Don Shugart reported they were currently seeking grant funding in the amount of $25,000 to purchase equipment for the department. He informed the council that if they had any questions regarding the operations of the department to contact him.
In his public works report Teriano Felder updated council members regarding the recent rain and the problems it had caused with the infiltration system and what they have been working on. He informed the board that the city’s grapple truck, which had recently been repaired, was acting up again. City Clerk Kim Lester then gave her report to the council informing them of the upcoming Mayor’s Day Conference on January 22-25. She also advised they were in the middle of the 2014 audit and that the information for the 2015 audit will be due by March 1.
The ship seemed to be sailing on calm waters until it came time to new business and the 2016 appointments.
Councilwoman Meredith Lester was unanimously approved to serve as Mayor Pro Tem for the city. It was also approved for McNair, McLemore and Middlebrooks to continue to be the accountant for the city.
However, tempers began to flare when it came to the appointment of the city’s attorney.
Councilman Dexter Whitaker made a motion to re-appoint Maurice King as the city attorney. That motion was seconded by Councilwoman Meredith Lester, but never made it to a vote. Mayor Mixon spoke against approving King to continue as attorney instead asking that the council consider Calhoun Law Group of Albany.
Whitaker pointed out to the mayor that both a motion and second was on the table to which he responded by stating he had not called for the motion. Whitaker persisted that the vote needed to called for. Mayor Mixon jumped to his feet at Whitaker’s argument exclaiming “Hey Cuff, I run this meeting.”
In an attempt to diffuse the rising tension Councilman Adkinson said that he did not know enough about either law group to feel comfortable making a vote.
Mayor Mixon then suggested gathering up multiple candidates for the city attorney position and bringing it back at the next meeting. Councilman Chester Thomas suggested advertising for the position, however Mixon, informed him the position was an appointed one and not a personnel issue.
Councilman Justin Bridges suggested that the council members bring a resume´from the attorney of their choosing to be reviewed before making a decision.
The motion and second on the table were not acknowledged and a vote was not taken to rescind that motion or table the issue of city attorney till the next meeting.
Other appointments went through smoothly. Hoffstadter and Associates remain the city’s engineering firm. That motion was made by Councilman Justin Bridges and passed unanimously as did the votes for The Vienna News Observer to be the city’s legal organ. and the re-appointment of Judge John Sherrer as the city’s Municipal Court Judge.
Whitaker, who served on the Downtown Development Authority Board had to appoint a replacement for himself. He nominated former mayor Dr. Bobby G. West to fill his position on that board which was approved by the council.
Whitaker then questioned the mayor as to why it was discovered that before his swearing in that he allowed his son to view city bank statements, accusing the mayor of violating the law before he was event sworn in.The financial statements of the city are in fact, considered to be a matter of open record. Any citizen can request a copy of the city’s financial statement. They are not to be privy to personal customer information such as addresses, telephone numbers or driver’s license or social security numbers. It was not clear whether any of that information was accessed.
“Me and you getting off on a bad foot already,” said Mayor Mixon in regards to Whitaker’s accusations.
At the close of the meeting Councilman Chester Thomas stated “We need to put our personal feelings aside or we will never be able to move forward. We need to conduct the business of the city and conduct ourselves professionally.”
Attorney Maurice King requested copies of the resume´of other appointments stating, “I am not asking for better treatment but I am not gonna allow myself to be treated worse.”