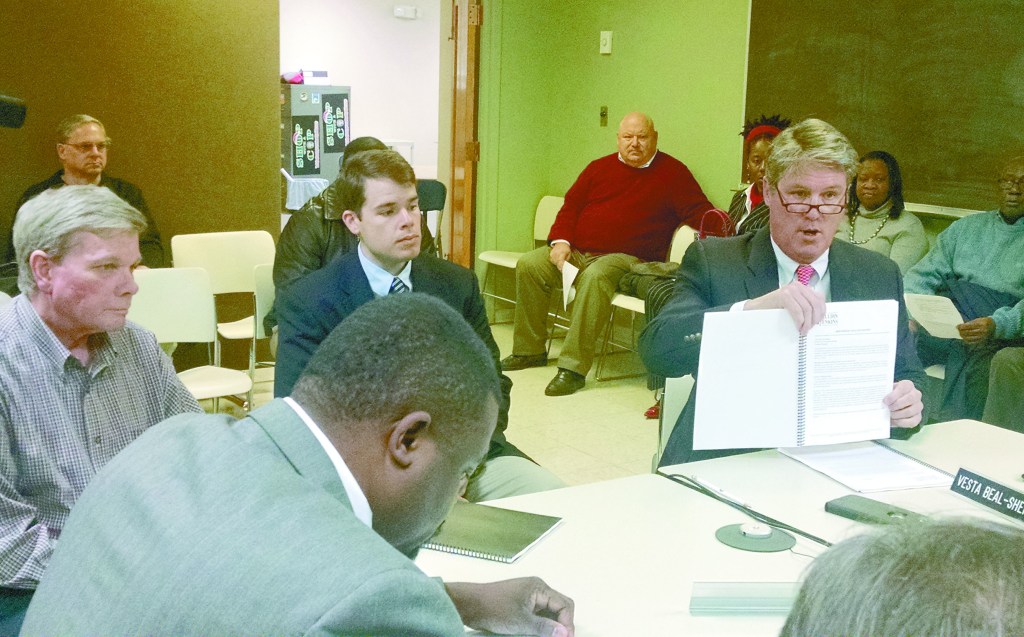 CORDELE — Just a few months after finally completing the audit for FY 2014 Miller Edwards of Mauldin-Jenkins returned to city commission to discuss the findings for the FY 2015 audit Tuesday night.
“There were a lot of hands involved in getting things straightened out,” said Edwards after thanking the commission for allowing him to speak. He advised commissioners that due to the FY 14 findings being so late there had been no time for taking any corrective action on previous findings so they rolled over to the most recent audit. He informed commissioners that the report was good.
Edwards reviewed the audit, which he presented a copy of to commissioners. He discussed the city’s assets and liabilities, cash and investments figures. As of the end of June he stated the city has $13 million in cash and investments.
One new liability he discussed with the board was the Net Pension which is imposed upon all governments. Currently the city’s pension plan is 86% funded which Edwards said was not too bad. He informed them that many clients he services are as low as 82% and even 20%.
“This shows that you are doing a good job and being proactive. You are right where you should be on this. When the market rebounds you could even see that number jump to in the 90’s. You have a well-funded pension plan and I hope your employees appreciate that.”
He said that while the city didn’t not make a big bottom line as a whole they did very well. He credited that in part to utility fees collected that generate cash flow.
“You broke even,” he said. “That is good.”
Edwards said right now the city is in catch up mode due to the mistakes made by the former finance director.
“With the right people in the right places, things can get done.”
In other business, Commissioner Vesta Shephard read a letter of appreciation from retired commissioner A.J. Rivers.
Shephard also questioned the honorary naming of a portion of a city street MLK Way after Dr. Martin Luther King. She wanted to know what could be done for the change to be for the entire street as opposed to a portion. Chairman Zack Wade stated it was what was previously voted on but advised Shephard she could make a motion if she wished to do so. Shephard made the motion which was second by Commissioner Royce Reeves Sr. With Shephard and Reeves voting in favor and Commissioners Jeanie Bartee and Wesley Rainey voting against the vote was split 2-2 with Wade casting the deciding vote against the motion.
Bartee asked Interim Police Chief Lewis Green to look into extra traffic patrol on 16th Avenue. She advised she had received complaints about speeding especially from semi trucks traveling through the city. Green advised that he would look into the issue.
During his action report to the board, City Administrator Edward Beach submitted several items for approval.
The board approved the second reading to adopt the groundwater recharge area protection ordinance. Also approved was a second reading to adopt the Wetlands Protection Ordinance. They also approved a change order in the amount of $59,467.80 for the 2013 CDBG Sanitary Sewer Rehabilitation project which increased the total project amount to $459,780.80.