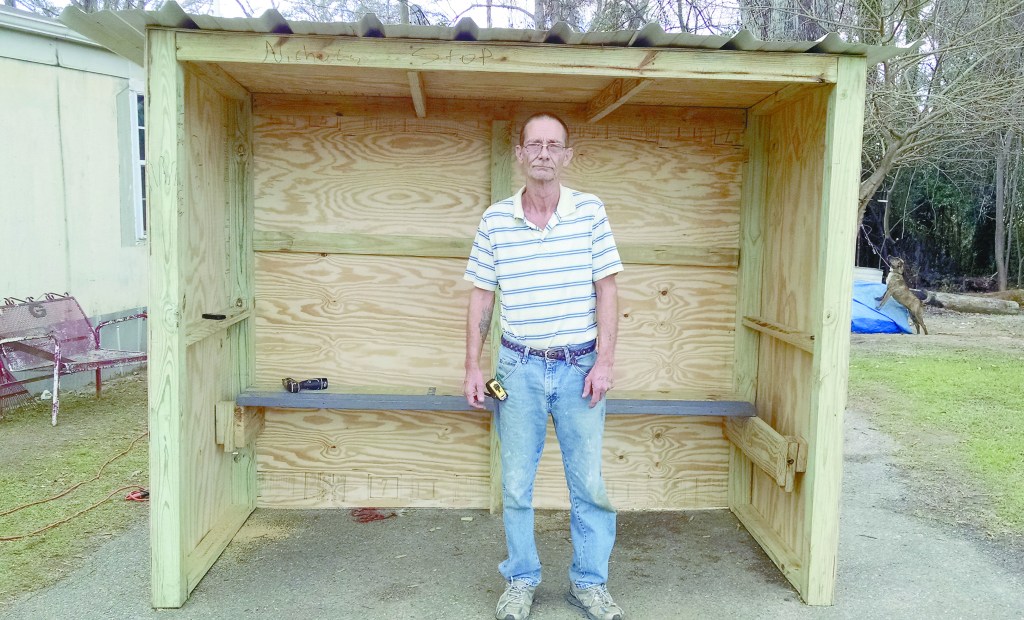 Becky Crissman/Cordele Dispatch Loren Nichols shows one of the bus stop shelters he has been working on. All that is left is to paint the shelter and put it up at a new bus stop.

CORDELE — A local man who has volunteered his time to build shelters for bus students in the city is upset that one of his creations has been destroyed. 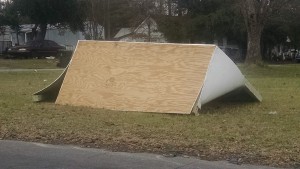 Becky Crissman/Cordele Dispatch
Nichols was disappointed to see one of the shelters he worked so hard on was destroyed not long after it was put into place.

Loren Nichols said he came up with the idea of the shelters because he felt so bad that kids were having to stand outside in the cold and rain and wait for the bus to go to school. He wanted to do something to help. He contacted City Administrator Edward Beach, who presented the matter to city commission members. Commissioners unanimously approved to authorize Nichols to place his bus shelters at pick up areas in the city right of ways. They asked only that he work with the city’s code enforcement agent, Jack Woods, to make sure the shelters were properly placed.
“I began going around town and seeking sponsors to purchase the materials or make donations to construct the shelters,” said Nichols. “Each shelter stands about 6ft tall and are 4ft deep with a bench on the wall inside. The cost per shelter is between $200 and $250.”
Nichols said he just wanted kids to have a way to get out of the cold air and have something over their heads when it is raining. He has been excited about the project, because he has always wanted to find a way to give back to the community.
He has already obtained two sponsors, Payne’s Roofing and Wells Hardware, that have donated materials to build four shelters each. Sponsors can advertise their business on the side of each shelter they sponsor.
With the help of his son and brother-in-law Nichols began putting the shelters together in his front yard.
“Once they are complete Fraser Auto Repair has volunteered and transports the shelter to set up. Each shelter is anchored by metal rods about 2 ft or more deep into the ground,” said Nichols. “They are very sturdy and they keep the kids dry and block some of the wind.”
Nichols happily placed his first shelter in the area of 22nd Avenue West and 9th Street South. However, his joy was short lived because just a day later it was discovered the shelter had been destroyed.
“I was just sick,” he said. “It hurt my feelings and I was a little angry. We don’t know who did it or why.”
Nichols said he was frustrated because whoever destroyed the shelter took it away from the kids that could have benefited from it.
“I do not want the sponsors to think their money is going to waste,” he said. “I will not place another shelter in that neighborhood.”
Nichols said that donations can be made through David Wade, who works in the personnel department of the City of Cordele. He said anyone interested in donating materials can contact him at (229)805-4271.
He said if there was anyone with a known bus stop in their neighborhood who would like to have a shelter to also contact him. Shelters can only be placed in the areas where the school buses are already stopping and must be placed on city right of ways. He said he would not be discouraged from continuing the project.
“Any donations to help with the project are greatly appreciated.”