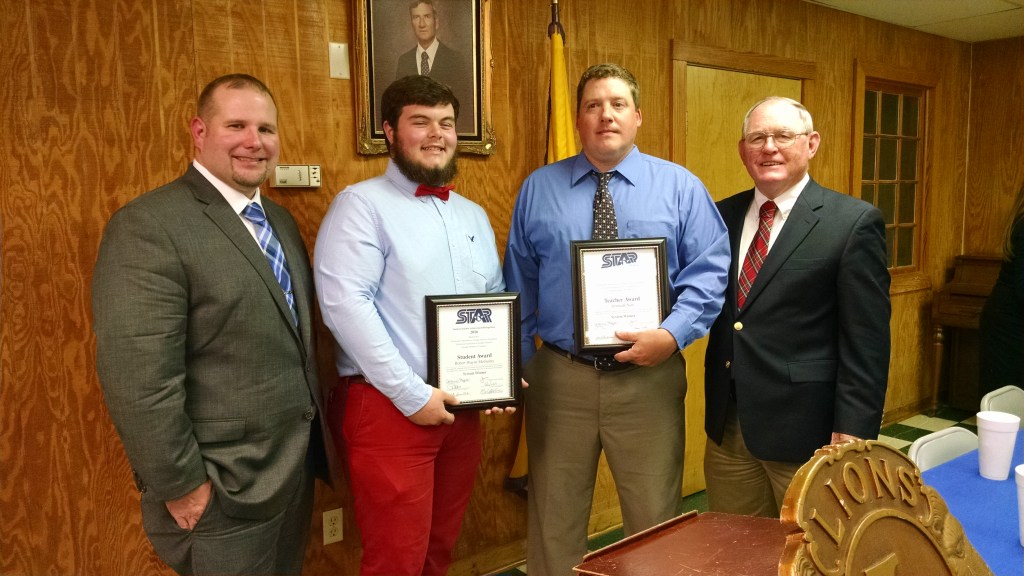 ROCHELLE  — The Rochelle Lions Club recognized the STAR Student and STAR Teacher for Wilcox County during an awards banquet held Tuesday night at the Wilcox County Ag Center in Rochelle.
Dr. Kristopher Frazier, president of the club welcomed honorees and guests to the. Following an invocation and meal Frazier shared the history of the STAR program. Known as the Student Teacher Achievement Recognition the program honors Georgia’s highest achieving high school senior and the teacher who has been most instrumental in that student’s academic success.
The Rochelle Lions Club has sponsored the program sicne its beginning in 1958.
Lion Donnie Clack introduced Robert McGuinty as this year’s STAR Student. McGuinty is the 18-year old son of Wayne and Robin McGuinty of Rochelle. He is a senior at Wilcox County High School and has been in the top five of his class since he began school in preschool.
Well rounded both athletically and academically, McGuinty has played football and golf all four years of high school and was on the track team freshman year. He has been an active member of the Wilcox County 4-H program since 5th grade and has participated on the BB team, .22 Team and Shotgun team for the club. He has also been a regular participant in the District Project Achievement (DPA) through the 4-H program.
McGuinty also is an officer with the Wilcox County high school FFA club and is president of the BETA Club and the Worked Based Learning. He has also a RESA writing award winner. Outside the classroom he is a member of the Rochelle Volunteer Fire Department.
After graduation, McGuinty plans on attending college and majoring in business and engineering.
McGuinty chose Coach Jeremiah Nutt as his STAR Teacher. Nutt teaches History at Wilcox County High School. He is also the Wilcox County Middle School Athletic Director and is the head coach of the football and baseball teams for that school.
McGuinty described Nutt as a teacher that “Always made you laugh.” He said he was a good teacher and he learned a great deal during his time in class with Nutt.
“I taught Robert twice,” said Nutt. “He has an all around good attitude. He was always smiling. He is well rounded both academically and athletically. I cannot wait to see what he does in the future.”
McGuinty received the Earnest J. Barker Memorial Scholarship of $1,000 from the Lions Club. He and Nutt received a plaque honoring their awards.
Following the awards the guest speaker for the evening was Coach Ben Rogers who shared some stories about his coaching experiences from around the area including three years at Crisp County High.